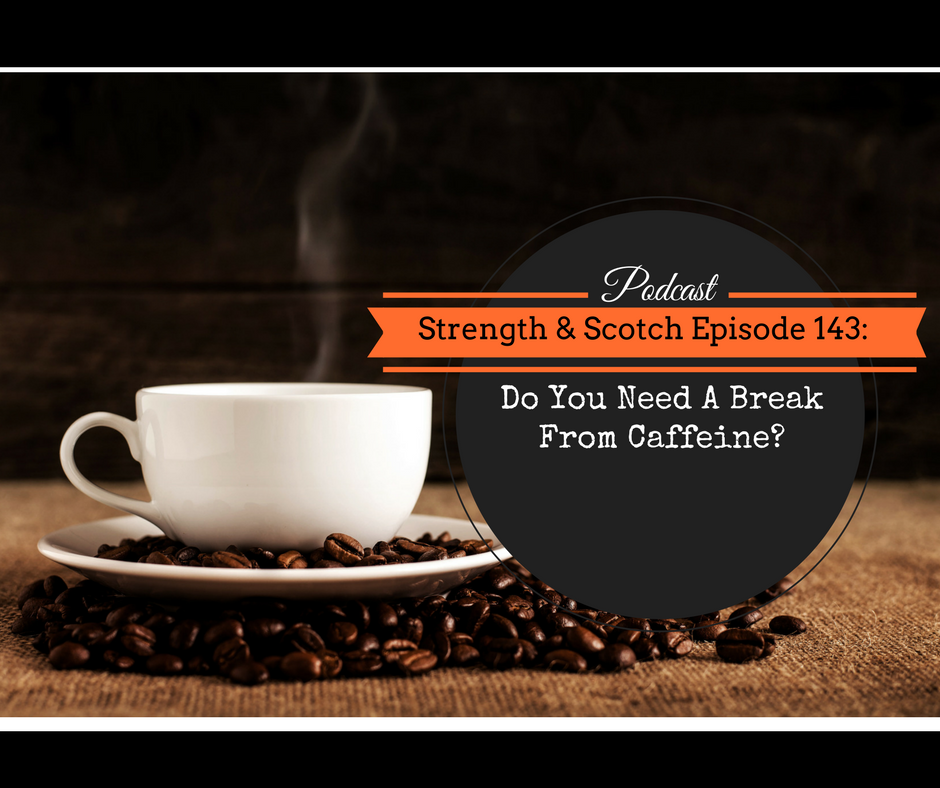 Today Grant and Heavey discuss caffeine tolerance and abstinence.  Heavey is actually in the middle of a caffeine abstinence period so he feels a little bit flat. Find out his reason for doing this as well as their thoughts on the way people should be drinking coffee. Plus, the duo talks a little about alcohol and chicken sandwiches!

This episode is sponsored by State and Liberty, makers of fine-tailored shirts for athletes.

Grant cites a study published in a research journal for Alcoholism: Clinical and Experimental Research. Correlation is not causation as Heavey would repeatedly mention on the show, however, this study looked at three groups of people – abstainers (people who don’t drink at all), moderate drinkers (1-3 drinks per day), and heavy drinkers (4 or more drinks per day).They studied them over a 20-year period and found that the moderate drinkers were the ones who lived the longest.

With a little over 1,800 participants in a span of 20 years, 41% of them died over this period of time. They were 55-65 years old when they started. Interestingly, the heavy drinkers were right behind them which means they outlived the abstainers. 69% of abstainers died during the 20 years.

Additionally, they put forward one theory that there is a social aspect to the drinking. Grant’s point here is to go drink and have fun. Heavey meanwhile thinks that with observational research, you can’t pull out a correlation and say drinking three drinks a day will make you live longer than not drinking since there are many confounders there. But he’s actually surprised the heavy drinkers outlived the abstainers.

Heavey ran some lab work on himself, specifically re-running the hormone test he previously had with Grant. You can’t have caffeine while doing the test so he pulled out his caffeine and restricted his fluids. And in this new version of the test, fluid intake is even more restricted. So he’s not sure whether it was the lack of fluids or the lack of caffeine that caused himself to not function well. He tried to work for four hours and just had to shut down.

Not wanting this caffeine thing controlling him, he pulled it out and has been running without it for around two weeks now. Remember when Heavey went out on a trip where he visited Grant for a few weeks? On that trip, he started drinking way more coffee than he was used to. Normally, he would have one cup per day but he slowly let this slip on his trip. And he was drinking 3-4 cups of coffee in a day which was a lot for him. He says you don’t really notice it until you take it out and realize its effect on you.

So Heavey wanted to talk about this because aside from him currently going through this, Grant dramatically reduced his caffeine intake for a little bit. Grant actually noticed a difference in the way he felt. He used to drink eight cups of coffee a day and reduced it down to one cup a day.  As a result, he felt more energy. Back when he was drinking too much, he felt like it was almost as if he was always chasing getting back to “normal.”

Heavey finds it interesting since one of the things people really like about caffeine is that it enhances mood and cognition. This is done by increasing the signaling of dopamine. When you drink caffeine regularly, your dopamine levels are actually down-regulated so you need more caffeine just to maintain normal levels. So when your tolerance is low and you don’t drink that much, having some caffeine can actually increase your cognition and your mood and make you perform at a higher mental level. But if you’ve built up your tolerance, you may need caffeine just to get back to what was your old baseline level. Heavey suggests it sounds like this matches Grant’s experience.

So how much coffee did Grant have today? Well, he says he actually filled his mug halfway with coffee and halfway with hot water. He had six of those today which is equal to about three cups of coffee. It’s actually a dramatic reduction from where he was and he does feel much better now.

[13:48] The Slippery Slope of Caffeine Tolerance

Heavey adds that tolerance is a big piece when it comes to caffeine. It’s what leads to that slippery slope where you’re just chasing the way you once felt. Think about that first cup of coffee you ever had and how that rocked your world. And now when you have a cup of coffee, it barely has an effect. So drinking cup after cup is just us kind of chasing that whether intentional or not. Heavey explains it’s like a lost cause because the more you drink, the higher your tolerance becomes and the less likely you’ll ever feel that way. You may just continue to push yourself and dig a deeper hole when you can’t even go back to your old baseline.

Some people say they drink coffee to keep them awake in the morning. What’s interesting is that the brain has these adenosine receptors. The A1 receptor that promotes sleepiness when activated doesn’t seem to get desensitized. Heavey suspects this might be the reason you can’t really build up tolerance and caffeine will always have that “awakening effect” for you where you need to have that cup of coffee in the morning to come alive.

On the other hand, the A2 receptor, the one that can increase dopamine levels, gets desensitized. And that’s what leads to this whole downward spiral.

Coming off of caffeine can be pretty challenging considering it is the world’s most popular stimulant. Heavey has worked with clients where their labs may come back and he would suggest short-term abstinence from caffeine. They will do almost anything else he tells them to do but they would fight him tooth and nail about removing their caffeine. And they will give him a whole laundry list of reasons why they can’t do it. It’s pretty amazing how addictive this thing is and we don’t really even recognize it.

It’s difficult when caffeine is already part of your routine. So what Heavey does is drink herbal tea or decaf coffee to replace caffeine. Also, there’s a lot of mental garbage tied up into this whole caffeine thing. He’s not saying you should not have caffeine. It has been shown to have major health benefits. But it’s all about being more aware of what we’re doing and recognize that more is not better with caffeine just like with exercise. If you want to benefit from it then you should modulate your use.

Heavey recommends that you use caffeine as a tool. Even if you’ve worked your way down to having a couple times a week but it’s those times where you really needed to perform. For instance, caffeine increases power output. Research shows that a dose of around 400 to 600 mg is one of the most consistent ways to increase your temporary level of strength. We see caffeine in pre-workouts and notice that if you consumed that before a strength day, it might make sense to have some caffeine before that and it will help you push even harder. But if you’re having four cups of coffee that day, what you’re going to get from that caffeine before your lifting is going to be diminished. You’re not going to get the same benefit.

Grant used to drink Red Bull before each time he went rock climbing and he remembers really liking it because it helped him focus. It got him in the right mood. He then recalled how having Red Bull before basketball made him feel awful, shaky, and sick. He never thought caffeine could affect him like that.

Heavey explains that if you want to make the most of caffeine, the right frequency to consume (on average) is about two times a week. Again, you can do it if, for example, you go to the gym in the morning twice a week then you can have a cup of coffee beforehand.

In general, having that one cup of coffee in the morning is fine but Heavey recommends to be more intentional about things. Take a week or two off of caffeine just to recognize your dependence on it and what it does to you. Then come back to it and have your one cup of coffee per day. Do this every once in awhile and notice how good it feels good when you come back. Grant used to do this once every couple of years and enjoyed the experience.

Grant and Heavey, however, do not advise going cold turkey. Ramping down slowly is a much easier way. Otherwise, you’re going to feel like a wreck. And this can persist for a couple of days depending on what your baseline is.

Grant raises this question whether caffeine has a negative effect on the sleep of those people with high tolerance. Heavey explains that the body seems to adapt to the dopamine piece but the “awakening effect” seems to persist. So it may have a diminished effect on your capacity to fall asleep but he doesn’t really think this is the case. Nevertheless, Heavey advises against drinking caffeine in the afternoons, otherwise you may still crash earlier at night but the quality of your sleep could very well be diminished.

There has been tons of research where they look at melatonin production. Melatonin is known as the sleep hormone and it’s what helps the cascade to get you to sleep well at night. And two of the things they’ve found that strongly delays melatonin release are exposure to electronics (blue light) in the evening and caffeine late in the day. Everybody processes caffeine at a different speed but as a general rule of thumb, Heavey recommends avoiding caffeine after lunch.

So it’s been two weeks since Heavey took caffeine out of his system and right now he’s drinking herbal tea in the morning. He likes that there are so many interesting flavors that he has come to enjoy. He does make a cup of decaf coffee later in the morning though. It contains some caffeine but only like 10% of what’s in a normal cup of coffee. Heavey genuinely likes the flavor of coffee so he still likes to have some occasionally so he’s thinking of adding caffeine back into the rotation. Besides, Heavey and his wife, Nicole, have made it a routine to make cappuccinos on the weekends. This is something he enjoys doing and misses doing as a couple. So he might go back to having a few drinks per week but not to where he was before.

Finally, Grant and Heavey wrap up the show with Grant thinking about getting coffee and some Shake Shack hot chicken sandwiches with Heavey when he comes to temporarily live with him soon.