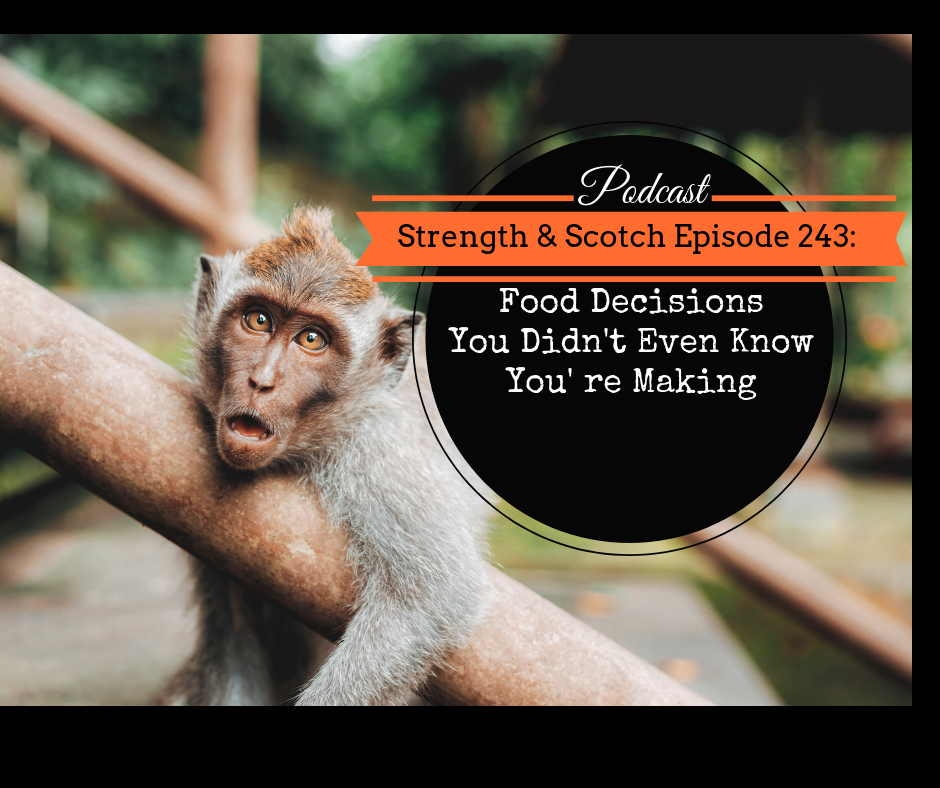 Grant and Heavey discuss the things in your diet that can unknowingly mess you up. They discuss some environmental factors that can affect your diet as well as the average number of food choices people make daily.  All this and more – including awesome barbecue tips from the BBQ enthusiasts themselves!

Does the size of your plate affect how much you eat in terms of the quantities you’re consuming? Heavey read this recent study on how the environment has a large effect on the quantity consumed.

Most of the conversation around diet and nutrition in the public space centers around what to eat and how much to eat of it. What we’re eating comprise a small percentage of the food choices we make in a day. And we’re largely unaware of the other choices. In fact, environmental factors like plate size, lighting, variety, etc. can affect diet. But most believe they’re not personally susceptible.

In the study, participants consumed tomato soup from a rigged bowl, that could be refilled as they ate without them noticing. Those eating from these special bowls ended up consuming 76% more than those that ate from normal bowls. But they estimated that they ended up eating the same amount of calories.

Heavey stresses that awareness around these topics may very well be the missing link for a lot of people with regard to their diet.

In the first sub-study, the goal was to understand how many food decisions a person makes in a day and how many they thought they made. After evaluating 139 people, they found that they dramatically underestimated the number of food-related decisions they make in a day.

Out of the 139 persons evaluated that thought that they made fewer than 15 food-related decisions in a day, the examiners found that they were actually making 219 on average.

This is obviously a HUGE disconnect. No further details were actually provided but they did state that the most commonly overlooked decisions involved the initiation and cessation of eating – why you start eating and why you ate as much food as you did.

Most of the time, we end up eating because we think it’s already time for eating and we don’t really let our appetite regulate it at all. If we were more conscious of the decisions we’re making everyday, we could be more vigilant of how the environment is affecting us.

The takeaway from this first sub-study is that people make more automatic food choices than they actually realize.

In the second sub-study, they analyzed over 700 debriefing comments from controlled studies looking at environmental factors that led to overeating. They asked questions like how much they ate compared to what is typical for them. They were also told that they were eating 20-50% more and asked why they think they’ve eaten more.

The average increase in consumption in the treatment groups was 31%. But 73% of the overeaters felt they ate as much as they normally would have. Hence, they were completely oblivious of being manipulated by their environment.

When asked why they may have eaten more, 52% claimed they didn’t and 31% said if they did eat more, it’s because they were hungry.  Only 2% believed they ate more because of the environmental cue.

When confronted with the empirical findings, most participants continued to disavow the idea that the environment led to them overeating. They even continued suggesting alternate explanations. This just goes to show how the mind can work against us.

Most people are unwilling to acknowledge their own susceptibility to manipulations in the food environment. All those being said, we are all susceptible! Just accept that so you can move on and make smarter choices.

Heavey doesn’t view food as something pleasurable every single time you eat it. Its main purpose is sustenance. He enjoys a great meal. But he doesn’t insist it on every meal. Most of the time, he’s having something that sustains his livelihood.

Ultimately, be aware that there are things you’re not aware of that may be screwing up your diet. Alternatively, you can combat it by planning ahead. If body composition goals are very important to you, think about not having to make decisions in the moment. Plan it so you don’t sabotage your goals.

This is actually the fourth in this series that Grant and Heavey have been drinking Laphroaig.

So for this fourth episode, they decided to turn this into a Strength and Scotch Shoot the Shit, covering a topic on the barbecue.

Heavey is from Kansas City, known for great barbecues while Grant is from Los Angeles. When he moved to L.A., he’d go to 3-4 American barbecue restaurants and thought they were all terrible amidst great reviews on Yelp.

Grant recalls loving ribs as he was growing up. But when he fell in love with barbecue was when he was working. They had a trade show in Vegas and he stumbled upon a booth that featured electric smokers. And he walked out with his own smoker. Since then, barbecue has become a part of Grant’s life.

Heavey describes Texas barbecue as the Islay of Barbecue. They cook it low and slow and it just melts in your mouth. It’s not saucy, nor sandwiches – just meat, salt, and pepper – sooo good!

One of the favorite things they like to prepare is brisket. An electric smoker runs on electricity and water to generate smoke. It’s an approximation of smoking meat. It’s not really water put in the pan, but wood chips. The heating element that heats up the wood chips gets really hot so you don’t need to add more wood chips. It also holds a little bit so you only get smoke for the first 30-45 minutes. If you’re smoking a brisket for 15-16 hours, that’s not very much smoke. The rich, smokey flavor never really developed and so the taste of the smoke wasn’t the same. So from an electric smoker, Grant moved on to a pellet smoker, and Heavey got himself one too.

The pellet smoker is based on the concept that originated from pellet heaters in the home. They take these small wood pellets and fed at a very precise rate to control the temperature at a very stable range. As a result, you get all the benefits of smoking wood without the cost of being awake and monitoring the fire while smoking the brisket for 16 hours. Therefore, you get the best of both worlds.

Grant says he gets the best barbecue coming out of the stick burners, the traditional “real smokers.” But he can’t imagine doing it for so long. Therefore, he prefers using the pellet smoker. The only heat is from burning those pellets so you get that constant flow of smoke, making it a great middle ground.

Grant recommends getting the brisket at Costco, relatively cheap at $3-$4 per pound. Costco has different briskets so get the packer cut. It comes in a vacuum-sealed bag. You will notice a big cap of fat and this is what’s going to make it so good.

Next step is to trim that fat cap down to about a quarter of an inch as some can be really quite thick. Otherwise, the rub is not going to get in and it’s going to be too fatty and gross. So you want just enough fat to keep it moist and have a little bit in each bite.

The real, hard, thick fat that’s over an inch in some spots won’t make the beat any tender. It just doesn’t render so it has to be cut off. In fact, once you put the brisket on the smoker, put the fat cap down between the heat source. This will insulate the meat so it’s not rendering or dripping down on meat the entire time.

After trimming, season it with salt and coarse ground pepper. That’s it! (Always use Kosher salt –Morton’s or Diamond). You don’t have to let the salt and pepper sit actually. Go ahead and toss it on the smoker.

Cooking time is going to vary. Usually, the rule of thumb is 1.15 hours per pound. Finish it four hours before you want to serve it. Wrap it, put it in a towel, and put it in a cooler. You’re going to smoke this to around 200 degrees so it’s good for the temperature to come down and stay warm for a while.

The temperature has been going up at a steady pace and all of a sudden, it just stops going down. It then sits there for hours at that temperature. This is when people start to freak out thinking it’s never going to be ready. But know that it takes a bit of time to get past that.

Once you get to that point, you do the Texas Crutch where you wrap the brisket in foil and put it back out there. This helps cook the brisket faster. This technique actually prevents the brisket from being so dry.

Bitten: The Secret History of Lyme Disease and Biological Weapons by Kris Newby