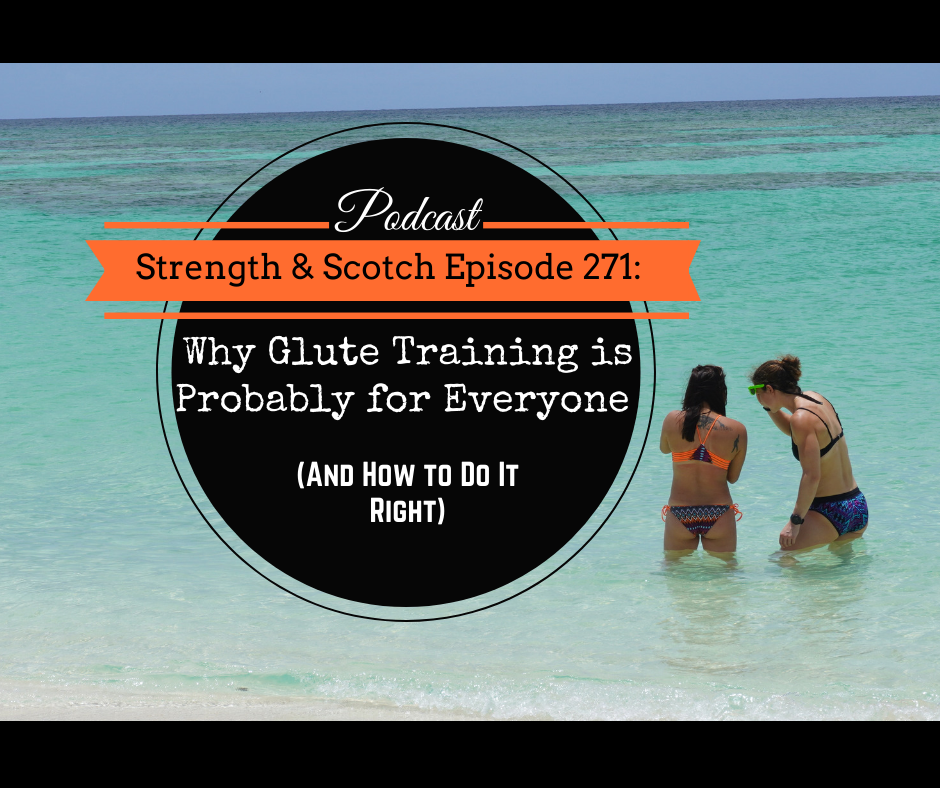 Today, Heavey is joined by his wife and Evidence Based Athlete Coach Nicole, as they talk about glute training. They specifically talk about the different movement patterns you can perform, the different reasons for training them, and whether this is something you would want to incorporate into your training program.

If you’re interested in having Heavey train your glutes, head over to strengthandscotch.com/coaching. Also, if you want to learn more about Nicole and the cool stuff she does, head over to Evidence Based Athlete.

[04:07] What’s So Intimidating About Glute Training?

Heavey has reached out to some people asking them what most intimidates them about glute training. The big thing seems to be the hip thrust exercise. Many people probably find it awkward to do and they end up blushing.

First, there’s that weird sexual thing that people connect to because you are thrusting your hips when you do the hip thrust. Many women are posting a lot on the internet about it. There may be some sort of macho element to it, but guys don’t really show off their glutes.

Then you’ve got people like The Rock who are posting it on their Instagram on a regular basis. They’re just doing hip thrusts. The more we see guys doing them in popular culture, the more guys are going to not see it as a huge deal.

You’d think guys would be into it because you can hip thrust way more than you can back squat or deadlift. So it’s ego stroking. For a woman, it’s totally empowering to be able to thrust weight in excess of 300 pounds, which Nicole does.

The title of the study is Effects of Hip Thrust Training on Strength and Power Performance in Collegiate Baseball Players.

In that study, they took a group of baseball players, split them into two groups and had one group add hip thrusting three days a week to their regular baseball training. The other group didn’t do any hip thrusts. This group also wasn’t doing lower body exercises during this study period.

The takeaway here is that at a minimum, doing glute training could be preserving strength. Another takeaway is that it could benefit training up your main lift, your squat, and your deadlift by adding it into your regular program, which a lot of people don’t do.

Moreover, the additional volume that you can provide with hip thrust and glute work could be really beneficial for a lot of people. For instance, Heavey can’t handle a ton of volume with squatting before his knees start to get achy. But if he can still do some heavy squats once a week and then do some accessory work with heavy hip thrusts, he can still get a lot of volume in without beating his knees up. Plus, he could potentially be building more strength than he could have done given his volume limitation.

The hip thrust is a movement like a lot of other glute movements which are more accessory type movements. These are things that you’re going to be doing in higher reps toward the end of your workout.

But the hip thrust is a movement that you can also go heavy on and do as your primary movement for the day for instance. It’s sort of an exception when it comes to all of the movements you can do for training your glutes.

Hip thrusts can be really safe with a low risk of injury compared to deadlifting or squatting. However, they have to be performed correctly, otherwise there is risk of putting more load on your lower back as opposed to your glutes.

The first thing is to learn how to properly posteriorly tilt the pelvis. When you do that, you emphasize the glute dominance of the exercise as opposed to lower back dominance.

So it’s like the bottom of your hips are thrusting slightly further forward than the top of your hips. It’s what naturally happens if you stand up straight and then clench your cheeks and kind of push your hips forward a little bit. But a lot of people have an anterior pelvic tilt as part of their natural posture where you’ll look at them from the side and essentially they’ll have their butt pushed.

So you want to do the opposite of that in the hip thrust. We want to try to focus on having that posterior pelvic tilt. Another thing is for your rib cage to be lower than your hips at the top of the movement. In other words, do not do row rib flare at the top of the exercise.

Then you’re going to lift your hips up so that your body comes up. Hips are nice and open at the top, so you’re kind of in a tabletop position at the top. Ideally, your shins are perpendicular to the floor in this position. Again, rib cages down, hips are up in a posterior pelvic tilt. Squeeze your glutes at the top.

There’s also a natural tendency for people to cock their head backwards and look up at the ceiling. It’s not a bad thing if you look at the ceiling, but there is a propensity to flare your hips when you do that. The easiest way to prevent that is chin to chest.

Check out @soheefit on Instagram and she has some really good posts on there about depicting these specific recommendations including how to do the hip thrust correctly.

Ultimately, there’s a few points of performance that you need to do with hip thrusts, but it’s a very safe movement and it is probably the most powerful thing that you can do for training your glutes. If you’re going to pick one movement, that’s probably the one to pick.

Picking between a hip thrust and a glute bridge may be personal preference too. If you’re having trouble getting the form down on a hip thrust, it doesn’t feel comfortable. Glute bridges are a lot easier to perform, especially if you’re trying this on your own.

In a frog position, glute bridge would be a frog pump where you put the soles of your feet on the ground, and they’re touching one another in a butterfly and a butterfly position. From there, you can rep it out.

Hip thrust and glute bridge are both the same movement pattern. They’re a bridging pattern. But there are three other key patterns that are important for training the glutes – squatting, hinging and abduction.

There are different squats like the Bulgarian split squats. You might count step-ups as a similar movement pattern as squatting. Those are also good training movements for glutes along with other lower body elements.

The hinge pattern is seen in deadlifting and other similar movements, RDLs, and abduction. Now, aside from that machine at the gym that guys don’t like to get onto is to either squeeze their legs together or apart, in other words, doing abduction or adduction.

[21:02] Abduction Variations You Can Try

A very similar variation to that is using bands instead of a machine. Loop a mini band around either above your knees and below your knees doing the same thing in a seated position. Another exercise that is really good, basically for everyone, for hip and knee health is clamshells. It’s an abduction exercise where you’re laying on the ground on your side, kind of like a side plank and lifting up one leg at a time.

If you’re intrigued about glute training after this conversation, the first thing you can do is go to Bret Contreras on Instagram. He’s got demos of all these movements and lots of great detail on structuring a training program.

There are three primary outcomes that people might find of interest. One is strength, two is power and three is hypertrophy. We could also call the last one, aesthetics.

There are slightly different ways that you might want to train your glutes. If each of those are your priority, another category could be sort of a subset of any of those.

If you’re training for strength, in a more structured sense and a more ideal sense, you’d probably use glute training as supplemental. Primarily, you might start out your sessions with a lower rep, higher intensity, big lifts like squats and deadlifts – the traditional sort of strength training type.

{24:46] Setting Up Your Training Sched for Glutes

Though you may devote a day to using hip thrust as one of those big movements, the bigger thing is probably layering on top of that supplemental work where you’re doing higher rep, lower weight work, and these other movement patterns. Across all the movement patterns, throughout the week perhaps, you can maybe have one leg day. Maybe you’re doing abductions and another one you’re doing squatting and bridging. So it’s really like thinking about training your glutes in a supplemental sense with perhaps a heavy day for hip thrusting.

In that study on baseball players, they actually measured changes in power by looking at long jump, a vertical jump, and maybe a couple of other measures. They saw no difference in power over the eight weeks.

And what we’ve seen in the research is that training at around 60% of your one rep max hip thrust with an emphasis on bar speed is how you most greatly affect power performance.

The other thing of note is that there is this notion of specificity where training in the horizontal dimension. Hip thrusts could affect your long jump and your sprinting capacity. Whereas training maybe with jump squats or speed squats, might be a more powerful tool for effecting vertical jump.

So there’s some element of tailoring your training based upon what power components you’re most interested in. Whether you’re a wide receiver that needs to sprint and jump high or you’re a 200-meter sprinter, that’s just looking to maximize your performance in your race.

And in doing that, each of those sessions should include a movement from each of the four movement patterns – bridging, squatting, hinging, and abduction. Also, you should hit high intensity, lower rep and lower intensity or moderate intensity higher rep.

You should just hit the gamut because the glutes are the biggest muscle in the body and different parts of it are activated by different movement patterns. The glutes actually have different subdivisions and some of them are faster twitch muscles while some are slower-twitch. And so, different training modalities affect the glutes differently. Having a wide exposure in your training is the most powerful thing you can do for improving the aesthetics of your rear. Not to mention, the variety you’re getting from those different movement patterns which is more fun.