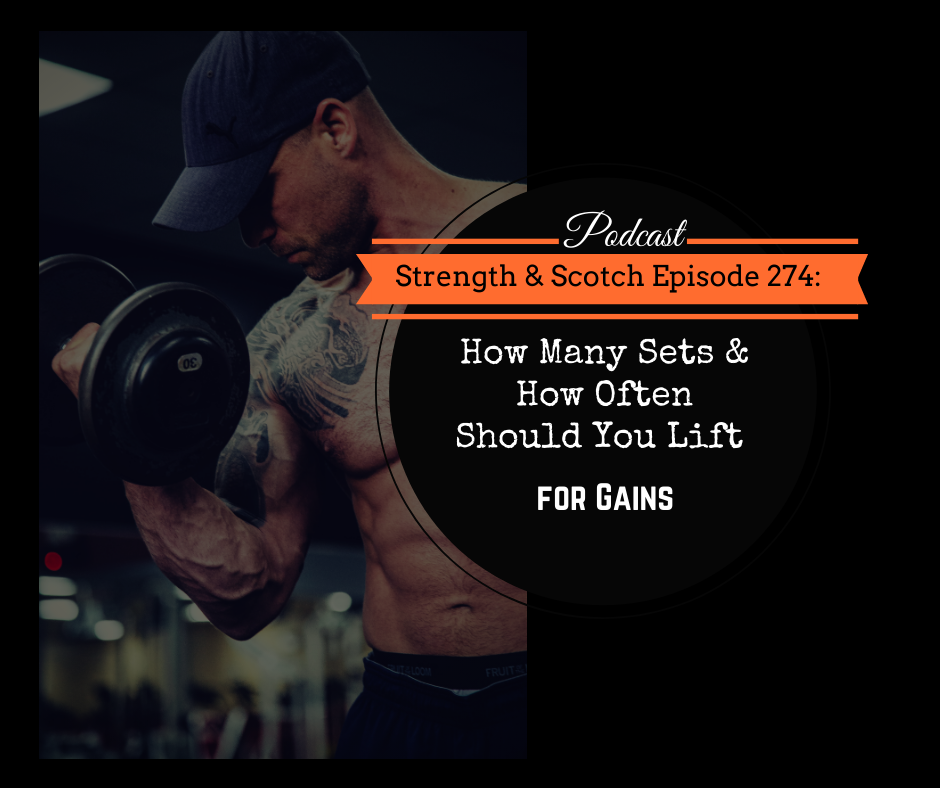 Grant and Heavey talk about how many sets you should be lifting for muscle gain – and how often. The studies presented in this episode have been conducted both over short-term periods and long-term periods. Tune in to hear the results and find your own sweet spot for working sets and frequency of training.

Looking for more guidance in your own training?  See if you’re a good fit to work with Coach Heavey.  Go to strengthandscotch.com/coaching to fill out a quick questionnaire on your training and goals.

[04:40] A Linear Relationship with Workout

Most people think about their exercise in a sense of dose response. It’s mostly a kind of linear relationship where the work you do is equal to the results that you achieve.

For instance, if you work out one day a week, then working out two days a week is going to be twice as good. And that’s kind of this relationship that people form with the exercise they do, which encourages them to ultimately exercise every single day.

There are people that find ways to justify doing more exercise when it could actually harm the results that they’re getting. For the most part it is true that there’s this dose relationship where the more work you do, the more you get out of it.

But there is a limit to that. It’s entirely possible for you to do sets that don’t lead to any additional gains or to even take it so far as to do enough sets in a week where you would regress as a result. So you would get less progress for doing more work if that’s something that you can imagine.

Heavey shares this study entitled Evidence of a Ceiling Effect for Training Volume in Muscle Hypertrophy and Strength in Trained Men – Less is More?

They put these lifters through a periodized 24-week, three day a week program. Those guys lifted to momentary failure during their sets and they rested between 30 and 180 seconds between sets, depending on what phase of the periodized program they were in.

Each workout was isolated, specific body part. So there was more of like a bro split sort of deal instead of full body sessions each time. They split these guys into four groups. One of the groups did five sets per week. One of them did 10, another day at 15 and the last group completed 20.

They all did the same number of reps between four and 15. The exact number of reps they did was dependent on where they were in this periodized training program too. But the range was four to 15.

In this study, they found that no additional benefit was conferred for strength past the 10 set group. They found that the group that did 15 sets and 20 sets actually got worse strength results. than those that did five and 10. And hypertrophy followed a similar trend but the differences didn’t reach statistical significance.

Hence, there was no reason to do more than 10 sets. And actually over the course of seven days, they were working out three days a week, but it was over a 24-week program.

If they’re doing 10 heavy sets at some high percentage of their 10 rep max, that seems like a lot of work. And any more than that doesn’t surprise Heavey at all that they were getting kind of beat up.

One of the novel features of the study was that it was 24 weeks long. It’s hard for people to conduct research that long, especially with experienced lifters that they got for this study.

It was a periodized program, that’s why there were 4-15 reps and the rest, amounts deferred. That was all being varied throughout the 24-week period.

The reason that that’s novel and is an interest is because a number of other studies have been conducted over shorter periods of time, usually six or eight weeks, And they have shown considerably that more sets are effective in a dose response sense than just 10.

So what they hoped to achieve in this study was to look over longer periods. Then probably  conclude that maybe while that’s true for short-term studies, but perhaps the over-training effect hasn’t been able to surface yet with a shorter intervention like six or eight weeks.

There was another study that showed that as many as 45 sets per week led to a continued hypertrophic dose response in a group of experienced lifters. And that’s 45 sets which is far beyond what they showed was effective – the ceiling of what was effective in this study.

These are practically two different results which Heavey finds wild. He thinks that perhaps if the study where they found 45 sets per week was effective, if they would have extended that to 24 weeks, maybe those higher set groups would have started to fall off.

The major takeaway here is that there’s none. Instead, notice that when you’re shown a study or headline from a study, that it’s not the end of the story because there are so many differences between these groups that got different results.

For instance, in the longer study, they’re hitting muscle groups one day per week.

But in the 45-set study, they were doing full body workouts even though the study only ran for eight weeks. They were doing three workouts per week and full body sessions. So they were breaking those sets up into fewer sets spread across more days within a week.

So it’s possible that had the lifters in the 24-week study been doing full-body sessions, they would have raised the ceiling on a dose response effect. But we won’t know unless there’s a new study conducted to give us some further insights.

Another study was conducted where they varied the rest periods in that longer study from 30 to 180 seconds. It’s possible that when they were sticking with the shorter rest periods, this dampened the results from the exercise because we know from other research that rest periods of two to three minutes tend to be more effective for strength gains and possibly hypertrophy depending on the circumstances.

So there are a number of differences in the lifting protocols where it’s difficult to make apples to apples comparison and say that the magic number of sets you should be doing per week is this.

But what you can do instead is that, for instance, if you’re interested in hypertrophy, then maybe go to that 45 sets per week study. Look at the program that they were doing and do that exactly as written. Then see if you could approximate those same results as opposed to just doing some random stuff.

This last study presented is called Benefits of higher resistance-training volume are related to ribosome biogenesis.

This is a novel approach that gets used in a number of studies and it helps cancel out a lot of confounders that can skew results.

They found that on average the legs that did three sets were stronger and had larger muscle group growth but it wasn’t like 90% of the people had that this big return. It was on average a net positive for three sets, but not that big.

[20:19] So How Much Should You Be Lifting to Maximize Your Squats?

First is if you are a beginner, the training volume that you can do could be higher because you’re not able to really push as hard as more advanced lifters are. So you’re going to recover much more quickly than somebody that’s advanced.

But if you genuinely are trying to push hard, get stronger, get bigger, then do you need to treat yourself as a bit of an experiment. You need to see that you’re making progress. And if you’re not making progress over a period of let’s say six or eight weeks, then there’s a problem and you have to assess why you’re not seeing progress.

Because if you’re not seeing any progress, then you’ve got to change something. But the question is how do you maximize your progress?

Again, you have to treat yourself as an experiment. Most of the time, it depends on what your goal is. If you’re interested in hypertrophy, then volumized training. Volume is one of the key drivers of hypertrophy. So just keep pushing it.

And as long as you’re making progress, you’ll keep finding your way to it. You can’t expect to go from not having any information, not knowing how many sets you should do to doing the perfect amount of sets. It’s just not going to happen.

Now another factor to consider here is to make sure all of the other stuff are in place – make sure you’re recovering well, you’re feeling good, you’re sleeping well, you’re eating properly. Then you’re going to be monitoring your hypertrophy or your strength. If it’s increasing, if your strength is going up, that’s an easy thing to measure.

Using a bathroom scale that tells body fat percentage can lead to all sorts of frustration and demotivation from disinformation because those things are garbage.

Evidence of a Ceiling Effect for Training Volume in Muscle Hypertrophy and Strength in Trained Men – Less is More?

Benefits of higher resistance-training volume are related to ribosome biogenesis.