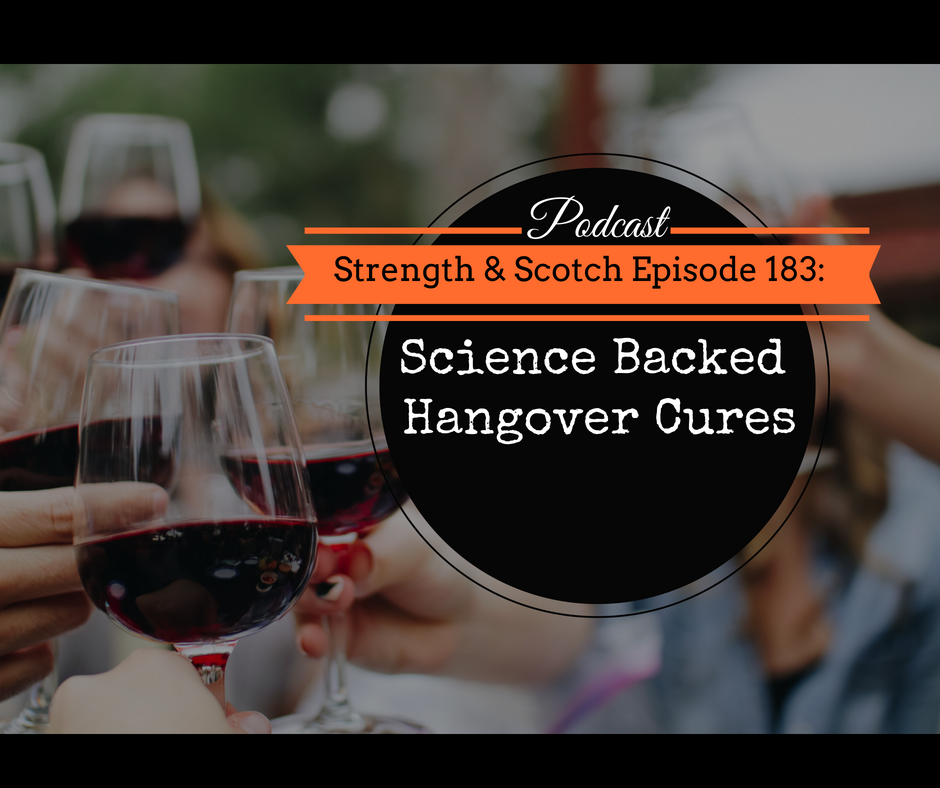 Grant and Heavey talk about possible ways to cure a hangover. You’d probably be surprised to know what the best way to deal with it is! Listen in to find out. Plus, Grant takes a sip of Templeton Rye, which apparently has a unique and interesting history that would probably make you all the more curious to try out.

[02:45] Unpasteurized Milk Can Make You Sick

Grant shares a recent study that spanned over a period of 5 years and is published in the journal of Emerging Infectious Disease. They analyzed 761 people who went to the hospital due to illness from consuming dairy products, specifically milk and cheese.

Heavey mentions this quote that “Drinking is borrowing happiness from tomorrow.” This is quite true, especially when you have to deal with a hangover. It’s like paying back the happiness from got from drinking.

Hangovers happen because of the alcohol’s effect on the brain but we still don’t really know exactly how or why it happens. Dehydration may play a role in the hangover.

As Heavey was going through the science on hangovers, he felt there were a lot of parallels with Delayed Onset Muscle Soreness (DOMS). They’re both unpleasant and common. A lot of people say they’ve got remedies, but don’t exactly know what or why it’s happening.

Alcoholic beverages contain ethanol and that’s where the magic lies. While it feels good, our bodies are not super happywhen we drink because it’s toxic. As our body recognizes it, it triggers the anti-inflammatory mechanisms that we’ve got built-in. This is because the alcohol creates oxidative stress in the body.

When you drink ethanol, it becomes metabolized into something called acetylaldehyde which is even more toxic than ethanol. Eventually ethanol gets converted into acetate which is less harmful.

We don’t really know the degree to which these compounds are responsible for the hangovers.

The symptoms like the headaches are likely caused, at least in part, by the inflammation and oxidative stress that affect your neurons.

Congeners are chemicals produced during alcohol fermentation which may also contribute to hangovers. Interestingly, they’re prevalent in certain beverages like red wine and brandy. They’re least prevalent in beer and vodka. The idea is that if you’re drinking more brandy and red wine, you may be more susceptible to a hangover. Scotch is pretty high on the list as well.

Grant agrees that he gets more hangovers from red wine. He hasn’t noticed it as much with scotch though (since he’s used to it probably).

Additionally, Heavey explains that we have to be sober to be hungover. We don’t really understand that either as to why the blood alcohol level has to be taken down before we start feeling the effects of the hangover.

One possibility is that alcohol is an analgesic so consuming it may mask the damage it does. Alongside, alcohol causes dehydration which can also trigger headaches and fatigue. But that also takes a while to set in. This may be part of why hangover comes further down the road from the fun times.

Moreover, alcohol messes with your sleep, which can lead to the same symptoms we experience when we’re hungover. It also affects certain hormones like cortisol, insulin, testosterone, and growth hormone. But none of that is really backed by studies.

Heavey implies all this is multifactorial, which means we can’t just put it in one corner and spot the culprit as that’s not the case.

There are no proven ways to prevent hangovers. The best method they know for hangover prevention is drinking in moderation.

Fat tissues carries less water to buffer the effects of alcohol so moderation can vary from person to person. It depends on how much you weigh and your body composition. Therefore, the more fat you have, the more likely a hangover is because there’s less water in fat tissue.

In general, women are more likely to get a hangover from an equal amount of booze than the average male. There’s actually a bit of research on this. If you have a man and woman that both weigh 175 pounds, as a man, on average, it takes about 6.8 drinks to produce a hangover. But as a woman, it takes 6.2.

[14:50] Other Ways to Mitigate the Effects of Hangover

Sticking with more diluted beverages like beer can help reduce hangovers because of the reduced amount and the slower speed at which you drink.

Food in the belly can also slow the absorption of alcohol. This reduces the peak concentration. Generally, greasy food is more attached to the recovery side of things when people are drawn to them. Heavey thinks any food in the belly can help slow the absorption of alcohol and reduce peak concentration. If you went with slower absorbing foods like fibers, they could stick around longer so that might prolong the effect.

Other compounds that might be helpful such as red ginseng, Siberian ginseng, Japanese raisin tree, prickly pear, and Korean pear.

Heavey explains that there are a bunch of mechanisms in play that people make arguments for anti-inflammatories. These other compounds include carcumin – the active compound in turmeric, glutathione upregulators like milk thistle, B vitamins, and Vitamin C. Most importantly, stay hydrated. Just pound water to keep yourself hydrated.

In basketball games, sometimes players will get an IV at halftime because they’re showing signs of dehydration. As Heavey has said, hangovers are multifactorial. While this may help in your hangover, it’s not guaranteed to magically make things better.

On the other hand, there are a couple of other things that people have noted to help them mask hangover. Coffee is a great example. It doesn’t make the hangover go away, but it can offset some of the brain fog and lethargy that come along with the hangover allowing to power through it more easily.

People react differently to hangovers. Grant reports having an upset stomach. Heavey explains that we all have different susceptibilities and weaknesses. In Grant’s case, he may have a weaker GI function and his gut is not well-equipped to handle large stresses. Other people may have weaker inflammatory response so they get hit in a different way.

When people say “hair of the dog”, they try to cure a hangover by drinking more alcohol the next day. This masks the hangover. By the time you come down from that buzz, while it does provide some relief, it also extends the hangover.

Heavey also says that people who mostly use this technique are those that drink substantially more alcohol on average than people who don’t.

Grant admits that one of the worse things when you’re hungover is exercise. You sweat three times as much. But afterwards, you usually feel way better. Heavey explains that exercise promotes the release of adrenalin. He doesn’t really think this has to do with sweating out toxins.

[28:55] Scotch Time: Enjoying the Templeton Rye and a Bit of History

Grant reviews the Templeton Rye. Templeton is actually a little town in Iowa with a history steeped in rye whisky. During prohibition, the farmers got together and started making a bunch of rye and sold it. It got notoriously famous due to the huge raid done that involved the whole town.

Taste-wise, Grant describes it having a sweet, grassy, orange taste. Reading about it, there’s a whole history of the bottle now. They got sued, in fact, because of “false advertising” due to misrepresentation when they were bottling. They said it’s from Iowa, when the distilled portion of it was actually being brought from Indiana. They were accused of adding a flavoring to make it match what the stuff used to taste like in Prohibition days. But according to the rules, nothing was really illegal in as far as making the whisky.

What’s interesting is that they can’t really use the whisky from the real Prohibition era. 95% of the mash is from rye whisky, which is very high as you just have to have 51% to make a mash. During Prohibition, they’d use very small amounts of rye and a lot of sugar. It’s finding that balance between wanting to tell your customers what they’re getting, but you also want to have your own character. At the end of the day, it boils down to what the bottle tastes like. Grant thinks it’s a good bottle of rye although not what you think of in what you normally get in a rye. There is added flavoring and it could rub people the wrong way. With so much controversy behind it, they started a $26-million project to distill and warehouse their own rye whisky in Templeton, Iowa and not importing it any longer.

Knowing all this history, Grant thinks it’s a cool bottle to keep an eye on.