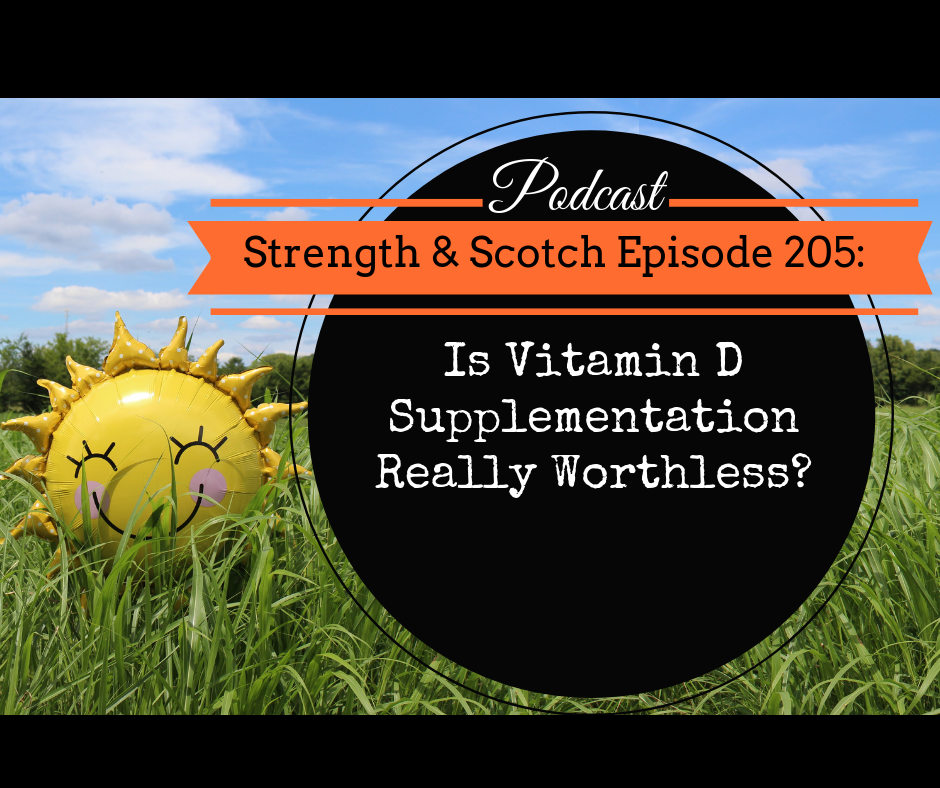 [06:40] Stress Can Lead to Memory Loss and Brain Shrinkage

According to a study released in the journal, Neurology, scientists at UT Health San Antonio based stress level indication on the levels of cortisol, instead of participant feedback.

They add that higher levels of cortisol predict brain function, brain size, and performance on cognitive tests. What’s more interesting is that they were actually looking at people under the age of 50. Their takeaway is that you’re never too young to be mindful of reducing stress.

Moreover, all people in the study had no signs of dementia, a cognitive decline from a baseline, etc. – and then they were able to correlate it to that stress. Conversely, they found that people who exercise throughout their lives have a lower risk of developing dementia and increased cognitive ability.

Back in Episode 202, Grant featured an article claiming that Vitamin D is crap. Heavey looked back at the study, with the following takeaways:

The author found that “Vitamin D supplementation does not prevent fractures or falls or have clinically meaningful effects on bone mineral density. There were no differences between the effect of higher and lower doses of Vitamin D. There is little justification to use Vitamin D supplements to maintain or improve musculoskeletal health. This conclusion should be reflected in clinical guidelines.”

The investigator was primarily looking into the interaction between bone mineral density and Vitamin D supplementation.

The reason doctors are telling their patients to take Vitamin D is to help minimize fracture and broken bones as people age. Hence, they make recommendations to prevent that and one of them is to have stronger bones.

In the study, they also made an argument that the previous meta-analysis on this topic was of low quality and the reason they conducted this research in the first place. Based on the data, there was no statistically significant change to bone mineral density from Vitamin D supplementation.

On the other hand, Heavey contends that he has seen much data on Vitamin D while reviewing scientific literature over time. He adds that when people are looking at meta-analysis, they’re looking at the results of different studies, which are then combined to draw larger and broader conclusions. There’s a lot of promise in that technique.

[15:55] Failure to Perform a Cohort Analysis

A lot of times in these meta-analyses, the author would look at subgroups within the population. If you cast a wide net and look at a huge population, say you’re interested in broken bones and bone mineral density, you can do a separate cohort analysis of the elderly. Then you can say that across the population as a whole you analyzed, there were no statistically significant changes. But when you look in the elderly, there was. However, they didn’t do this kind of analysis so we don’t really know if that was the case. What Heavey means is that it would have been good if they looked at the “elderly” cohort. This is a standard when you’re doing meta-analysis.

Particularly, you’re looking at bone mineral density and Vitamin D supplementation to help prevent falls and fractures and the elderly have a much higher propensity for these things. To look at that subgroup would have added a lot more insight into the interpretation.

If you have a healthy level of Vitamin D and you supplement on top of that, if that doesn’t affect your chances of falling and breaking a hip, that makes sense, Heavey says. But in most of the studies, the individuals are in the healthy range. So he feels that without doing some additional cohort analysis and just by looking at the people that had low baseline levels, it’s really hard to draw conclusions.

The article basically concluded that Vitamin D is useless based on a meta-analysis looking at all the other studies done to create a bigger sample size with more valuable conclusions.

Because there’s such large statistical power, then it’s common practice for a meta-analysis to look within different subgroups (ie. age, gender, ethnicity, etc). However, the study failed to present such.

In fact, Grant came across another study where they looked at a cancer drug. 90% of sufferers of this type of cancer are African-Americans. But in the drug test, they had 2 out of 100 people who were African-American.

This is the same idea as the study above. The elderly are the ones more prone to broken bones and falls, but there was no sub-study done on them. It’s important to look at the overlap of the elderly with the deficient levels of baseline. What happened to them?

Grant points out that the devil is in the details. This is the case with nearly all of these studies. While they try to distill complicated things into easily absorbable bits, but without the details, you lose the actual value of the study.

Heavey adds that based on this research, the average person will not benefit from Vitamin D supplementation for falls. But, nobody is average.

Again, there was no cohort analysis done in the study above. Heavey has seen studies that focused on the elderly with deficient levels and it showed improvement.

Hence, it’s very important that you do further research before making sweeping generalizations about things because this study could potentially make headlines for weeks or months and it’s going to convince some people to stop taking it. This is going to do a disservice to some people. If it’s your grandma with low Vitamin D levels and stops taking it, then it possibly increases her chances of breaking her hip.

All this being said, it’s worthwhile for people to test their levels occasionally and work with their doctor to interpret them.

[25:40] What Should the Average People with Low Vitamin D Levels Do?

Heavey explains there are numerous health outcomes that have a negative correlation with low levels of Vitamin D. Vitamin D interpretation is a pretty complicated topic. People with low levels should talk to their doctor.

He adds that there is value in supplementing with Vitamin D when you’re deficient in it. How you define “deficient” is where the complexity comes in.