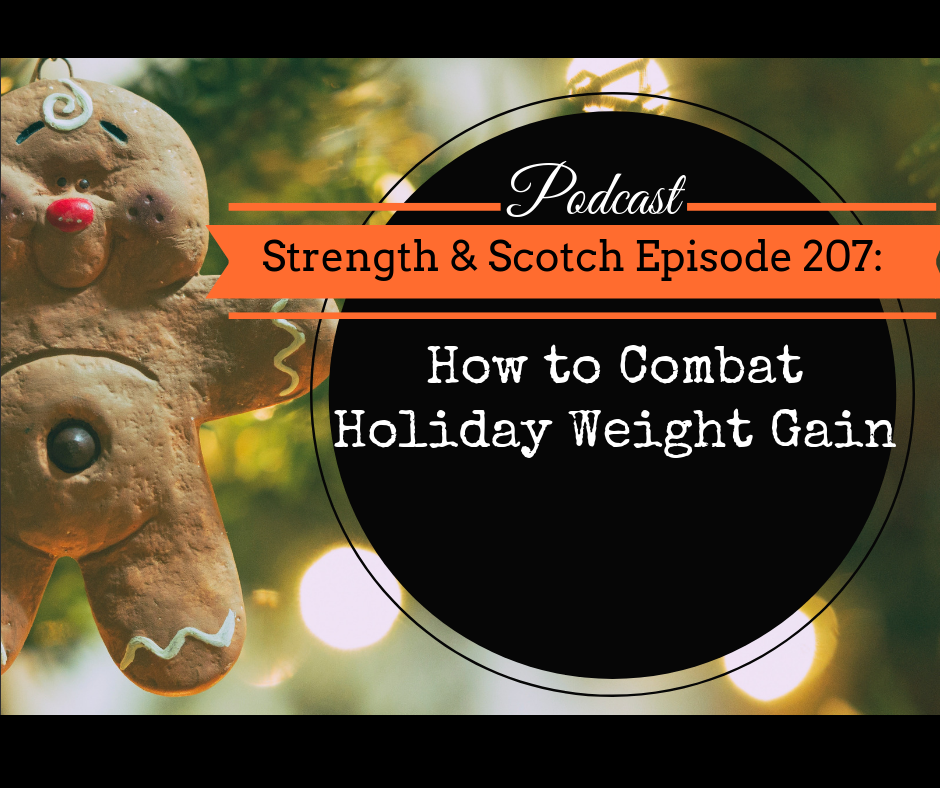 It’s that time of year again! Grant and Heavey talk about strategies around how you can combat weight gain during the holidays. They dish out a ton of insights that you can begin to try out this holiday season!

All sorts of holiday festivities leave many of us putting on a little weight. How much harm can a single meal do to your body? Science suggests that if you’re having a meal that is larger than normal, you will pack on some fat as a result. But a lot of that will be burned as heat energy and will also pass through you as a bowel movement. In fact, figure out your average poo leading up to big holiday dinner. Then measure your post-holiday dinner poo and see how much larger it is.

After a large meal, you will have more to pass and typically won’t put on a ton of fat. Your weight can swing dramatically after that meal in a non-fat-related way. A lot of times, these meals can have high amounts of sodium than what a healthy eater might normally consume and could lead to water retention.

Moreover, people that tend to eat a lower carb diet will have a lot of carbs during this period, which can lead to greater weight increase due to larger glycogen stores. This could lead to a few pounds of increase in and of itself. Glycogen is stored in your liver and muscles. However, you could easily get rid of it by doing several sets of sprints.

Glycolysis is largely utilized when we’re doing short, intense activities. However, we use all energy systems at all times. Depending on the activity and time duration determines which energy system is predominantly working.

The real takeaway here is that you’re not going to gain a lot of fat from a single meal. You may gain some weight but don’t worry. That shit is going to go away, quite literally,  as long as you return to your baseline diet.

This is where it starts to become a problem. As we’ve mentioned, cheat days can undo your progress during the week. But most of the weight gain that happens in the U.S. happens at this time of the year, between Thanksgiving and New Year’s. That’s one of the primary contributors to adult weight gain.

Oftentimes, that’s because each holiday season doesn’t consist of just one or two special meals. People tend to just throw down during the holidays. They drink more and eat more with family, and then with friends, and then with the in-laws, and then with another group of friends or coworkers. They do things that are a bit out of the ordinary for them that increases their total caloric intake over time and ultimately leads to fat gain.

Heavey lays down these strategies to help you combat holiday weight gain.

Enjoy yourself on those one or two very special occasions, but don’t say “fuck it” the rest of the time. Keep in mind all of the hard work you put in the rest of the year. Don’t let yourself totally derail over the next month.

Just because you only see somebody during this season, that doesn’t have to mean you’re going to eat 12 cookies together because of it.

Research demonstrates that tracking your food is a powerful tool during the holidays for preventing fat gain. On average, people gain a shitload of weight during the holidays, but those that track are more well-equipped to prevent that from happening. The idea behind this is that a lot of people feel guilty when they have to log them. However, this could also be about being intentional with the things you do.

Load your plate up with all the good lean protein. This will help fill you up and you won’t be as hungry to consume the other items. You’d still enjoy them but perhaps not in the same quantity.

Have a fiber-based salad and a cup or two of water 30 mins to an hour prior to the main event. This will help reduce your hunger when the big meal happens.

This is another time of the year when people become less active. A great idea would be going out for a walk post-meal. This is also another awesome way to bond with people you’re around. Grant adds that doing this wouldn’t make you feel like you’re exercising since you get to keep that conversation going while walking for 20 minutes or so.

The key takeaway here, says Heavey, is that if you’ve been exercising 4-5 days a week and once the holidays come around and you drop that down to two, that’s going to have an effect on your body composition. So either, reduce your intake during this time or make the time to exercise.

Say, you stop eating as much the rest of the week and then cut back Mon-Sat, this could work. A little planning goes a long way during this time of the year. For instance, you have back-to-back Thanksgiving dinners, just keep in mind what’s in your calendar then reduce your intake in the week leading up to it.

Or, you can employ strategies like intermittent fasting. For example, on the day you’re going to be eating a lot of food, then don’t eat in the morning. The only downside to this is it can lead to an unhealthy pattern of eating – binging and starving yourself. Long-term, this is bad news.

Doing the same thing afterward would work as well. Another thing you want to avoid is going into the meal famished. If you fasted all morning and head straight into Thanksgiving dinner, you start to smell all the food that you’re looking forward to, which can easily lead to a binge fest. This is the time to have that salad and water. Get your hunger under control up front with something reasonable. Then go to your meal with protein as your primary feast and treat yourself at the end.

Keep in mind the true purpose of the holidays. It’s not about eating. It’s about being around these people that you love. Be grateful for what you have. You have to put this more into the forefront than thinking about the food.

Find the small things to be grateful for. It doesn’t have to be a massive thing you’re happy about. Very high on the list for Heavey is being able to spend Thanksgiving with Grant and getting to play a part in Grant’s wedding. Grant, on the other hand, admits how this has been a challenging year for him and he’s thankful for the people that support him. This year, there are things he couldn’t handle on his own and so people close to him have held him up when he wouldn’t have been able to do it on his own. Ultimately, it’s the network of people that helped him, which is something Grant is so grateful for.

Grant brings out a cask-strength Laphroaig 10. This particular batch is a couple years old and trends at $195 online. But Grant was able to find it for $75. So he had to pick this up. He describes the difference between this and the regular one as night and day.

The label would have you believe the difference is just the percentage of alcohol. However, there are so many other variables that go into it. Cask-strength is not the same as a single barrel. This is still blended from multiple casks. By 10, it means that the youngest part of it is 10, but it doesn’t mean everything is 10. And it doesn’t also mean there’s no water added. It’s also a misnomer because oftentimes when spirits are done, they’d usually go into the casks about 70%. This means this probably has a bit of water added.

Especially in warmer areas, you can expect the alcohol content to increase over time. With scotch, they find it that over time, it decreases because it doesn’t have the same evaporative properties. Regardless, this is thought of having more value since you get more booze.

But for the Laphroaig 10, they recommend adding twice as much water as whiskey to fully appreciate the taste characteristics of original cask-strength Laphroaig. Indeed, Grant and Heavey did this and it did open up the flavor. The cask-strength stuff always feels sharp when you drink it. It’s got the hot note of the alcohol as it comes through. But when you try it after adding water, it mutes the sharpness of the alcohol and lets you enjoy the more muted tones in it. Grant adds that more water in it changes the way it smells to the nose of the whiskey. Otherwise, you couldn’t do this since the alcohol fume can actually burn your nostrils.