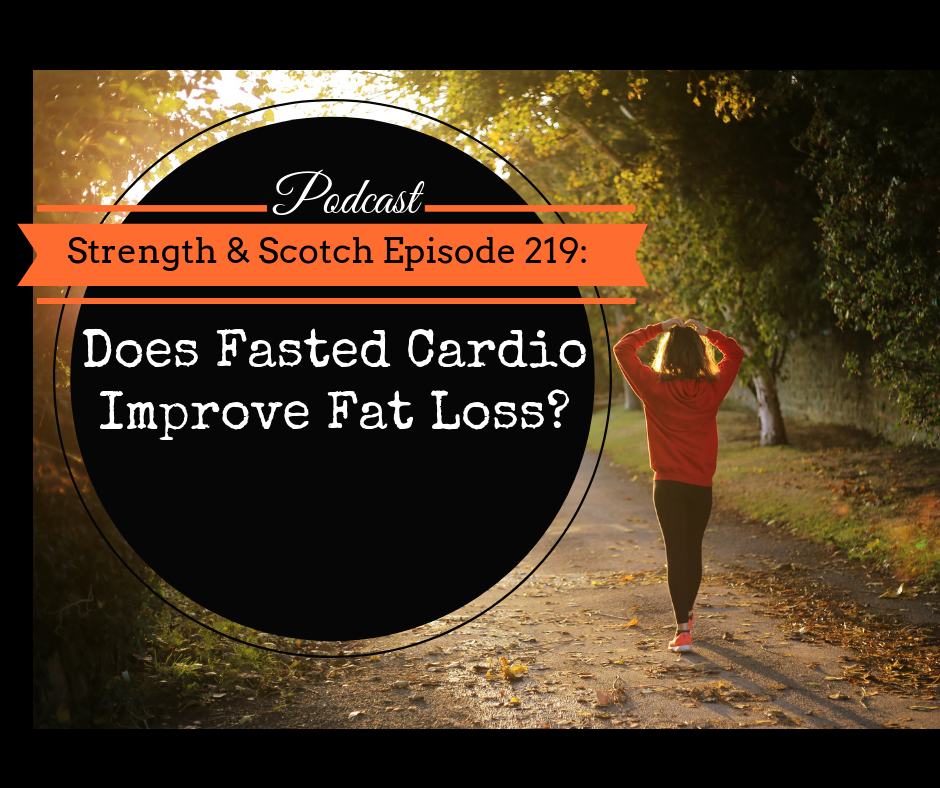 Also- per a listener request, we’re going to start sharing study links in the show notes. If you want to geek out more with Heavey, go to strengthandscotch.com/newsletter to dive further into the science regularly.

Grant talks about an article about orthorexia nervosa, which is a term that means fixation on healthy eating. It takes concepts around healthy eating and apply them to an extreme that it becomes unhealthy. Heavey adds that when you start attaching labels of good and bad, then you start to fixate on that component to every aspect of eating, people become fearful of the “bad” items. For example, there are people that are terrified to have any carbohydrate in their diet because they’re “bad.” In the same way that there are some who can be obsessed with certain training, like CrossFit or spin classes for instance, where they give it their all to lose weight or get healthy, but that could be too extreme. It ultimately gets to the point of becoming a disorder.

Fasted cardio is doing a cardio session without having eaten for an extended period of time, which is usually done upon waking up in the morning. There’s this notion that doing this can help lose fat and is a widely accepted concept. Let’s try to look into the science behind this.

Heavey points out that there is very sound research showing that fasted cardio enables your body to preferentially liberate fat as fuel for exercise. Hence, you will lose more fat from doing this. This is true directly after the activity, however, when you look at fasted cardio through the course of the day, there is actually no difference in energy burn.

Moreover, in a lot of research around fasted cardio, they’re not putting the individuals in a state that is priming them for fat loss. They’ll feed them in an isocaloric type of diet where they’re trying to fix their calories so they’re not losing or gaining weight.

There was one study though where they tried to set the conditions so the individuals would be losing fat during the course of the study. They had a control group and a fasting cardio group. In that group, they look at 20 healthy females split into two different groups. One group had a 250-calorie shake before the am training and the other group had one right after the training. Both groups were maintaining the 500-calorie deficit each day. This study was done over the course of a month (not bad!). Heavey believes that this study is the best situation for looking at whether it really helps lose fat.

Additionally, each individual is made to do one hour of steady state cardio on a treadmill three days a week. They set the intensity at 70% of max heart rate. Both groups lost around 3 pounds in total and two of those were from fat. But there was no significant difference between the two groups.

A follow-up meta-analysis was done and included the results of other studies where they were not necessarily setting the conditions for fat loss, but they looked at body comp as the endpoint.

[17:10] A Natural Mechanism and How It Benefits Hypoglycemic People

It’s a mechanism, as Heavey explains where the body does preferentially liberate/oxidize fat during fasted cardio. If you do this isolated study and we look right after this hour of fasted cardio, we see your body has burned more fat. Then we just jump to the conclusion that you lose more fat.

In endurance training, your body can get really good at using fat so fasted cardio may benefit endurance athletes to include this in their training because it will help them use fat. The same with those doing CrossFit where you can benefit if your body develops some metabolic flexibility because you will then know how to use different fuels and substrates.

If you’re doing it to improve body composition, you’re not helping yourself. At the end of the day, it’s about doing what you like, so it’s a personal preference.

Grant and Heavey are currently enjoying a bottle of Uigeadail. This is Heavey’s favorite and it’s from Ardbeg. It doesn’t have an age statement, but it’s a more premium offering than their standard 10-year.

Grant considers Ardbeg as one of the most well-managed distilleries in Scotland, reason being is that it closed and went out of business. It was only recently that they reopened. This has put them in a position where they have to find ways to market bottles and make them really special.

What makes the Uigeadail so unique is its sherry-casked forward flavor — not only super peaty, but it’s predominantly sherry-casked. So there’s a full body character to the spirit while still retaining that peaty, smokey taste. That said, if you’re not a peat lover, then this may not be the whiskey for you.

Heavey’s Newsletter.
Effects of aerobic exercise performed in fasted v. fed state on fat and carbohydrate metabolism in adults: a systematic review and meta-analysis.
Effect of Overnight Fasted Exercise on Weight Loss and Body Composition: A Systematic Review and Meta-Analysis