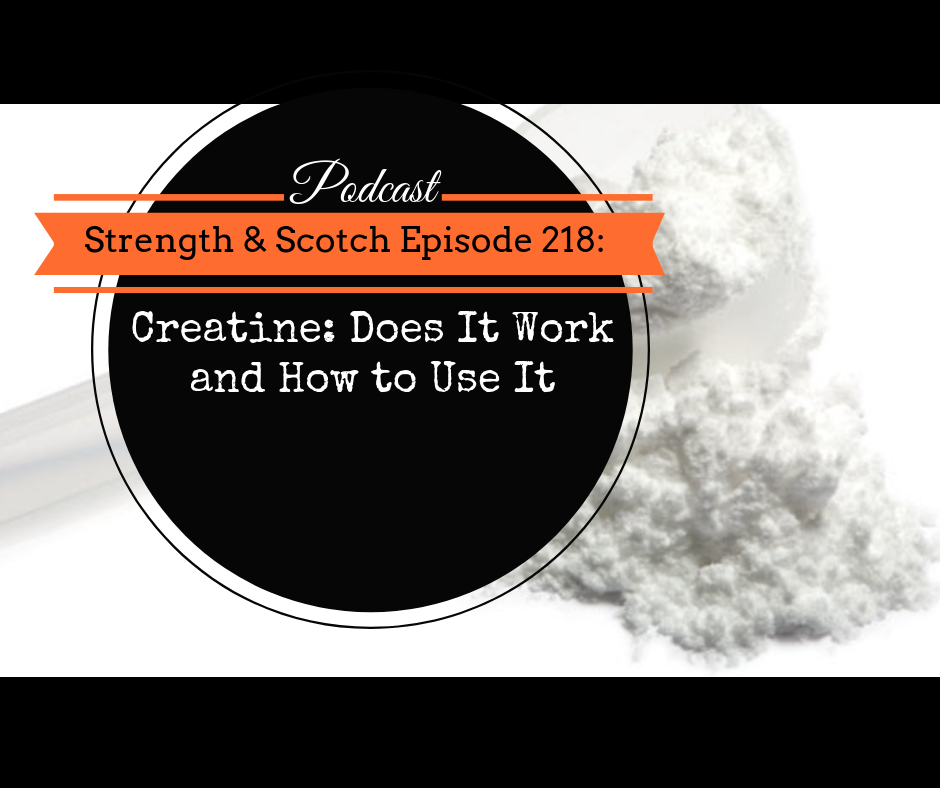 Grant and Heavey revisit the topic of creatine- what is it, what’s it good for, and the traps people get caught up in with creatine. Let’s just set things straight here early on — creatine is a not a steroid! It’s actually an essential compound created by our bodies.

Grant found an article featuring a study which suggests that if you’re rocking while you sleep all the way until you’re a grown person, it will affect your sleep in a positive way. They correlate it to improved memory simply by having people gently rock while they slept. In the study, they found that for people, the rocking frequency was four times slower than the mice. Nevertheless, they found the same improvement in quality of sleep and memory retention.

Creatine is not a steroid, but a compound created naturally within our bodies. It’s also found in certain foods.

Our bodies have a natural energy currency known as ATP. We use ATP whenever we perform different activities but the body has different mechanisms for replenishing ATP such as the oxidative system and glycolytic system (how your body uses carbohydrates).

If you need energy to run a marathon or run a mile, those are the primary systems for creating ATP that you’re going to need.

The third system is the phosphocreatine system, which provides the fastest replenishment. Supplementing with creatine to saturate levels within our muscles will help us be able to get a few more reps during training.

Creatine supplementation turns out to be very effective. In fact, it’s the most well-studied supplement out there.

One meta-analysis showed a 7kg greater increase in bench and 10kg increase in squats over a period of eight weeks when compared to those who didn’t supplement with creatine.

Heavey and Grant tackle the common things people tend to get caught up in when it comes to creatine and one of them is formulation. Many companies claim to be superior while others are cheap and basic. It turns out that basic formulation has been used in almost all of the research.

Despite all marketing claims, nothing has been shown to be more effective than plain old creatine monohydrate. If you want to supplement with creatine, this is what you should go with.

If you feel side effects like stomach cramps, you may want to try micronized creatine. It’s similar to monohydrate but dissolves better in water, so it’s easier on the tummy.

[14:40] Taking the Right Dose and Saturation

Start taking creatine at 5 grams per day. Creatine supplementation is beneficial by putting your stores in saturation. This amount will take most people about a month to reach saturation. This means you get the benefit added slowly over one month. The idea is to take it on a regular basis to get the most out of it.

Cycling off of creatine is something that has a lot of misinformation out there. Your body naturally reduces its capacity to normally produce creatine when it detects that you’re supplementing with these external sources. We don’t want to impair our body’s capacity to do that. Hence, we take a break from it.

The studies have shown that when creatine is taken out of the diet, there’s a dip in levels short-term and then the body runs back up its production to normal level. So there’s really no need to cycle off of creatine.

When you’re in a loading phase, take 20 grams per day (not all at once!) over a period of a week, going down to 5 grams per day thereafter as your maintenance phase. So you can break this into 4-5 different doses throughout the day. Your goal here is long term so it doesn’t matter if it takes a couple of weeks until you’ve reached your full potential.

Although there’s no reason to be concerned about the side effects, the most common is GI distress. There are a few cases that you may want to be more careful so be sure to talk with your doctor, such as if you have an existing kidney condition.

Finally, if you’re on any diuretics, talk to your doctor. Creatine increases your water retention and diuretics are trying to reduce that.

One study found that if you supplemented with creatine coincidentally with caffeine, it would negate the effects of creatine. But in a follow-up research, they didn’t see the same results. At best, it’s equivocal so there’s no reason to be concerned.

Ultimately, creatine is effective for getting stronger and building more muscle. Take 5 grams per day!

Grant and Heavey are currently indulging in a special release of a nine-year-old Lagavulin, released in partnership with The Game of Thrones. They think it’s a fine whiskey. It’s obvious it’s young. There’s that sour acid taste that you would notice in younger bottles of alcohol.