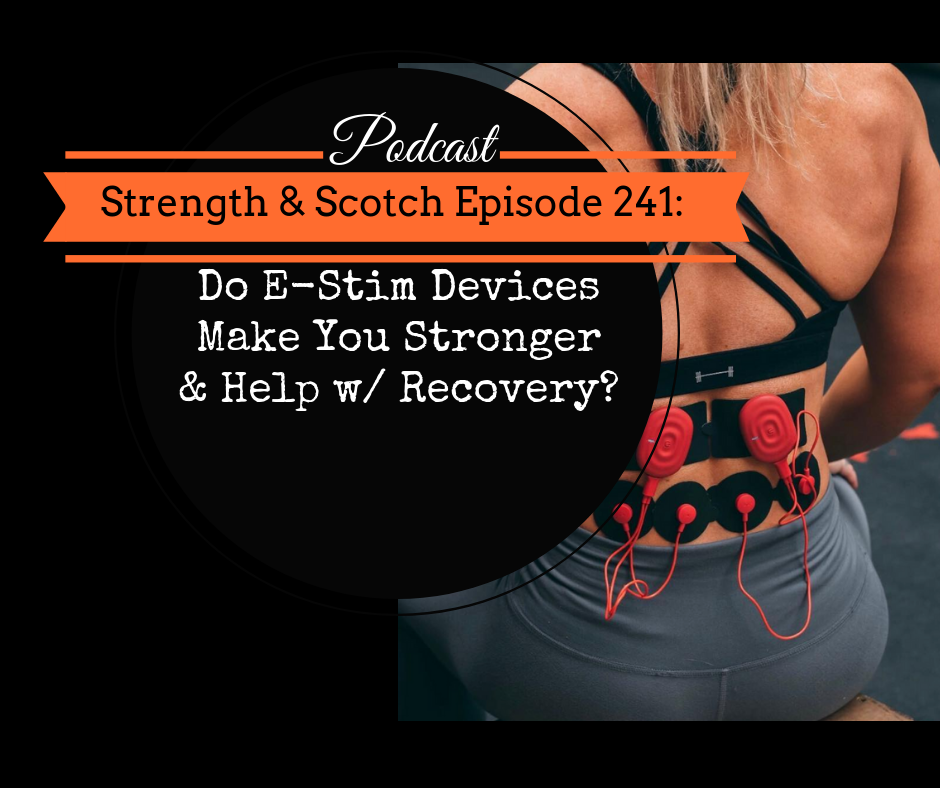 Grant and Heavey talk about Electrical Stimulation (ESTIM) devices. They claim they could enhance muscle recovery but does it actually work? Or is this all just total BS?

Plus, learn more about the different Laphroaig bottles as Grant gives a quick review of each.

A listener is asking how to use any of the ESTIM devices. And another question about scotch, specifically about Johnnie Walker Green Label and why it’s so hard to get it in Ohio.

ESTIM devices work by putting electrodes on your body to shock your muscles. They market it by claiming you don’t have to exercise but you can still get buff. There’s a belt that has been advertised where you can wrap the belt around your midsection and it is supposed to give you a six-pack. Does that even work?

[07:57] ESTIM for Muscle Preservation and Recovery

They have implemented treatment with ESTIM devices in fields like cardiovascular medicine, orthopedic medicine, sports medicine, and geriatric care. There are actually pieces of evidence that support this.

There is relatively strong support for electrical stimulation for preserving or recovering muscle mass and function during periods of disuse.

If you’re injured for instance and you can’t squat, you can hook these things up to your legs, hamstrings, and quads and still preserve your muscle mass, or bulk it up a bit, while you’re waiting for your body to recovery.

It’s been used to improve muscle function in different populations like the elderly and in athletes. It can be used to actually increase strength too.

When you squat, your muscles are fired in a coordinated way to help you move the muscles efficiently so you can lift the load. But this coordination isn’t involved in the contractions that come from the ESTIM devices. Hence, they provide a novel stimulus and it can be used in unique ways.

Heavey came across a paper called Physiological and Methodological Considerations for the Use of Neuromuscular Electrical Stimulations.

The aim of the review is to discuss evidence-based considerations for optimal use of neuromuscular electrical stimulation in healthy and impaired skeletal muscles.

They walk you through how you might configure these ESTIM devices for specific purposes. It includes tips on how you can get the most of it, such as increasing the intensity whenever possible. They actually suggested that you increase the intensity from pulse to pulse within the treatment.

ESTIM devices have been found to improve strength. When you’re squatting, your slow-twitch muscles start to carry the weight. With increased time and intensity, the fast-twitch fibers begin to take over. When these are stimulated by the electrodes, both kinds of fibers are stimulated right away with high intensity through the current being put in your body.

That novel firing of the muscle tissues can preferentially grow muscle fibers that are especially helpful in power athletes.

With low intensity, you won’t see any muscle contraction. But as you ramp up the current being driven to the muscle tissue, you will begin to see the muscle pulsating.

[12:44] What ESTIM Does for High Level Athletes

Heavey found an article, The Truth About EMS by Charlie Francis, a track and field coach where he talks about super high intensities for these devices to beneficially affect high-level athletes.

Within the session, moving the electrodes can also be helpful for enhancing the effects as well as altering the joint angles to change your muscle length. All this provides unique stimulus to the muscle during the treatment.

Another application for ESTIM devices is to target and train specific muscles such as the erector spinae for low back pain prevention. There is much research that electrical stimulation can be used effectively for using both strength and power in athletic populations as well as a bunch of medical applications.

Heavey found a paper called Neuromuscular and Electrical Stimulation During Recovery from Exercise: A Systematic Review.

In this analysis, they looked at 13 studies covering about 189 subjects, mostly male, largely trained participants.

One thing to keep in mind is that there are so many different variables and it’s sometimes hard to pull research together and make inferences. One might have a different current than another and one might pulse at a different frequency than another. Hence, it’s very challenging to make inferences. In the research world, they refer to this as heterogeneity. Nevertheless, they did their best to minimize the impact of that in their study.

The researchers concluded that ESTIM often being commercially marketed as an effective modality for enhancing recovery from exercise, there seemed to be insufficient evidence to support this.

The low-end devices are at $300-$500 but the high-end machines can cost tens of thousands of dollars.

Heavey also read somewhere that as they’re ramping up the intensity, they’ve got to be careful as they are shocking the quads a lot of the times. And if you’re not careful, the current could pass through the groin area.

Back to Charlie Francis, he’s training Olympic athletes and they need every little bit to go the distance. But the value proposition for everyday folks wouldn’t be as strong. You, therefore, need to consider why you’re doing all these other things.

There are cases though that these devices can be viable especially when you’re injured. Ultimately, this is something to consider.

Just to give you a brief overview, 10 years would mean that the youngest component in the bottle is 10 years old. So when you say single malt, it doesn’t mean it’s just one age. It means that everything in that bottle was made at the distillery. But a 10-year could have 20-40 different components from different barrels based on what the master distiller puts in there. But the youngest component is 10 years.

When there is no age statement, it just means you don’t know how old it is, but that doesn’t mean it’s bad. Johnnie Walker Blue Label is their most expensive bottle and it doesn’t have an age statement on it. So no age statement doesn’t necessarily always mean cheaper.

Just a little more expensive than the 10-year is the no-age-statement Laphroaig called the Quarter Cask. The flavor is less intense with still that unique Laphroaig flavor. The Quarter Cask is a quarter of the size. The smaller the cask, the quicker the whiskey matures because it’s the volume to surface area ratio is lower.

There are also two other Laphroaig bottles that are very similar: the Triple Wood and the PX Casks. They both start in bourbon barrels like a ten-year. Then they go into the quarter cask for a bit for some rapid aging.

And then they get finished in a sherry bottle. One is the Oloroso sherry (Triple Wood) and Pedro Jimenez (PX Cask), which is a little sweeter than the Triple Wood.

The Triple Wood has some sweetness compared to the regular but not as much. So if you like the peat but also miss some of the sweet sherry stuff then this is a great choice.

The Triple Wood and Pedro Jimenez are both 48%. The latter is one of their travel-exclusive wines so it’s a lot more expensive.

If you want something rich and complex, Grant recommends the next highest standard bottling called the Laphroaig Lore at around $100. It’s really good.

There’s no an age statement. But it has quarter cask, little sherry, and a whole bunch of other things to it. It’s super complex but really really balanced as well. You can taste so many different pieces of the spirit.

This is a ten-year bottle that’s up in the 50% so you get more bang for your buck but it’s more expensive. They’re made as special bottles.

They’re calling it a Cask Strength because of its higher percentage. That means that in a non-cask strength, you’re getting diluted whiskey. The difference between a cask strength and a 40% is they added water to it. In this case, they blended it slightly different to make a different bottling. But that said, they mix it out of the barrel and dilute it with water.

Physiological and Methodological Considerations for the Use of Neuromuscular Electrical Stimulations

The Truth About EMS by Charlie Francis

Neuromuscular and Electrical Stimulation During Recovery from Exercise: A Systematic Review