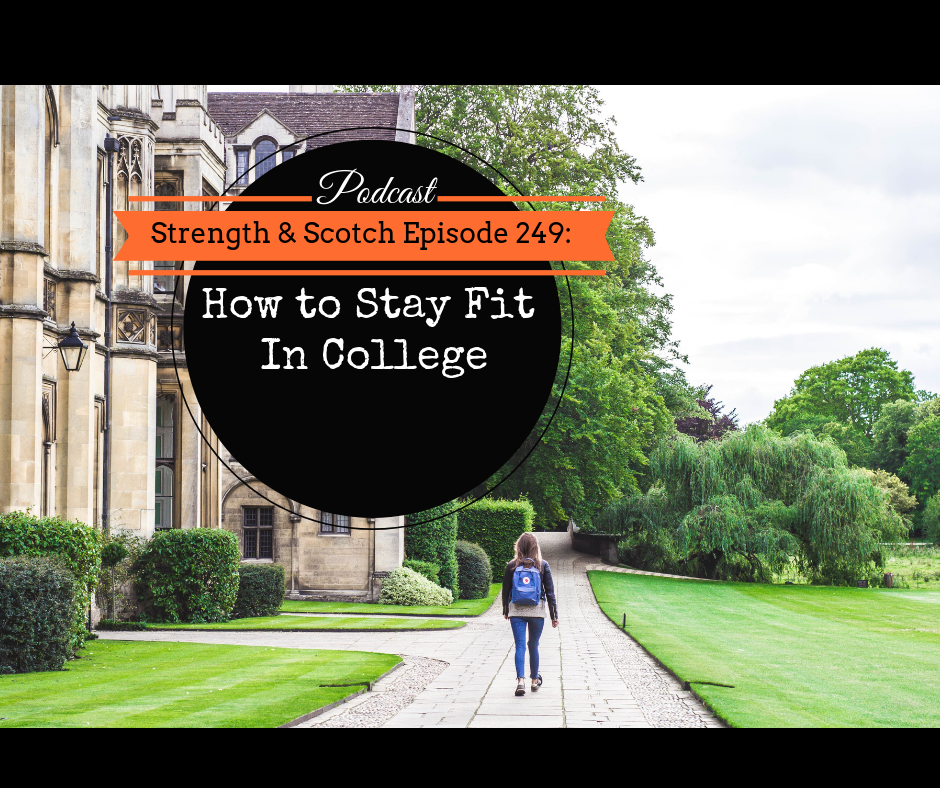 Today, Grant and Heavey are joined by listener Austen as they talk about how college kids can stay fit, motivated, and overcome intimidation. The three also enjoy a 12-year Macallan and find out what makes drinking scotch such a unique experience!

When Oregon students go back to school this year, they will be able to take mental health days without risking an unexcused absence. This is apparently a new law signed by the governor which allows them to take a mental health day without any proof from a doctor. They’re simply allowed a day off and allowed to up to five absences every three months.

Austen views this positively. Since 2013, 36% of college-level kids in Oregon have been diagnosed with depression. However, he does think that the mental health day is going to get abused by some.

Parents may not be as sympathetic to their children’s needs and they’re being forced to go to school. Hence, we have to start trusting people at a younger age to make those kinds of calls.

In 2016, California passed a law that employers had to give each employee a minimum of 3 days paid sick leave.

Grant recalls his college days as having a lot of booze and smoking weed without putting on weight. He admits that feeling comfortable with exercise was a challenge for him. Being in a relatively big university with a large student body, the school has a lot of athletes and walking into the gym was very intimidating for him. He didn’t get into exercise in college until he began to do things like rock climbing and mountain biking.

Starting college at 145 pounds, Heavey managed to put on 40 pounds as he finished undergrad. Then he lost almost all of it in a three-week period. He went on an Icebreaker through the Antarctic and didn’t do very well on the ship, so much so that his health was compromised, losing about 30 pounds.

Austen gained about 40 pounds in his Freshman year with lots of beer and buffet-style food. He would describe himself as always being a thick guy but at that time, he just let it go. He didn’t notice he was getting thicker. And that following summer, he lost all of it.

Austen was initially forced into weight training for football and practiced two hours a day.

When college students realize they’re packing on pounds, they typically try to find the quickest way to lose it. But you should instead aim for having a healthy lifestyle than having a six-pack. When Austen had to lose those pounds back in college, he wasn’t close to doing it in a healthy manner.

Now, Austen has a one-goal-a-week or one-goal-a-month mentality. If you could change one thing a month that’s going to make yourself better, you’re going to get there eventually as long as you stick with it. Whereas if you try to attack everything at once, you might be setting yourself up for failure. This is actually a powerful way to change habits.

Just go. Get to the gym and for sure you’re going to do something. if you don’t go then you’re obviously not going to be motivated to do anything.

Have fun. Go to the gym and whatever you see that looks fun to you, then do it. A lot of times, people think that fitness has to look a certain way and then they’ll try the hardest to do that for a week or a month and burn out because they’re not having any fun.

Grant can attest to this actually. He did kickboxing ten years ago but that was serious stuff. Now, he’s doing more of like cardio boxing which he finds so much fun. There’s no one to spar with or trainer nudging him to get ready for a fight and he loves it! And because he’s having fun, it doesn’t feel like work to him anymore.

Another example is if there are some toys in the gym like some big truck tires you can flip, some sleds to push, and ropes to play with. It’s not your usual boring treadmill stuff.

The point is to find something or elements of your workout that you can enjoy or tolerate as you try to build consistency.

[21:50] Overcoming the Feeling of Intimidation

Austen has never felt intimidated at the gym by other people but he felt intimidated by what he should be doing. He thought he was going there doing all the wrong things when just getting there was already an accomplishment.

Grant adds that part of his reason for intimidation back in the days is that he just didn’t know what to do and didn’t want to look like an idiot. He didn’t know how to exercise on his own.

Sometimes people also get intimidated by the weight they’re lifting especially early on. They’re just starting to lift weights and they feel like people are judging them for lifting lighter weights. But the truth is that nobody cares.

So keep doing what you’re doing and celebrate your accomplishment of actually being in the gym.

Everybody’s going to look at you when you’re a new face in the gym. That’s just how it is. And if you’re in there having fun, nobody gives a shit. It’s not going to affect their workout or your workout.

[26:40] How College Kids Can Prioritize Health

Or some might care about the chicks they see in the gym. Whatever could motivate you to take your diet seriously and exercise frequently, then that’s a reasonable thing to do, especially if that’s going to get you to push hard in the gym.

Austen points out though that one of the big issues with college kids is that they don’t want to believe anything that wasn’t their idea.

Grant believes that the habits we start at that age continue on throughout the years and have a long-term effect. This is because of the nature of building habits.

Lots of those Instagram people that look like models, well, you don’t see all the work they’ve put in to stay in shape. They’re also in the gym spending hours a day, working to look like that.

These feeds are not real. They’re curated for you to consume. You can’t let that sort of lifestyle dictate your being.

Moreover, the biggest risk for college kids is that everybody drinks all the time when that’s not what happens. Austen actually thought that drinking every night was fine and he got this idea from watching TV shows.

Heavey believes that drinking is a big contributor to overconsumption. College kids need to prioritize exercise. But the likely scenario of weight gain comes as a result of overconsumption either through booze or the buffet line at school. This is an area that needs to be paid attention to if they want to stay lean.

Austen used to go to a school where all the food they wanted was in their cafeteria – all you can eat!  In fact, Austen saw people who stayed at their canteen the whole time. It sound really good until you realize the effects.

Alternatively, Austen’s buddy dropped 80 pounds in 6 months. He claimed he fasted for four days, then he ate 300 calories the next day. Totally not healthy!

Grant makes a valid point in that schools should be able to provide alternatives.

There’s nothing particularly unique about the tips Austen would give to somebody in college. However, the challenges of college kids are unique. Interestingly, a lot of people make emotional decisions for the majority of time in college. It’s so easy to say “fuck it” in college.

These kids need to think about what they could set now for their life to look like over the next 4-5 years. This can be achieved through small steps.

The three are enjoying a Macallan for today’s show. Macallan has changed their lineup a bit. They now have a double cask, triple cask, and sherry cask that are all aged 12 years. They’re all right about the same price between $50 and $60.

Here’s an interesting trivia: The most expensive bottles of whiskey ever sold in auction were all Macallans.

Austen loves the flavor. Heavey thinks it’s fine. He gets a little bit of sherry, some oak wood flavor, and some of the vanilla. For him, it tastes simple.

Grant explains that the spirit is all the same for the three. They’re all 12 years. The double cask has half American oak and half European oak which are both sherried. So basically, the difference is just in the wood and where it comes from.

The triple oak is those exact same pieces of oak with an additional third oak which is ex-Bourbon. So it’s a bit lighter, plus, the vanilla and caramel that you get from Bourbon. It leaves off a little bit of raisin and dried fruit sherry taste.

And while the double cask is half and half between European and American, the sherry cask is all European, specifically, all-Spanish sherry cask. So it’s interesting how similar they are yet how different they can taste.

What Macallan is really known for are these heavily sherried, rich, full-bodied, smooth whiskeys. It’s way different than anything you get from Islay or the Highlands. The Macallan has a rich, caramel, dried fruit taste.

The bottles of Macallan are so highly regarded because of the balance they can play with these different woods using the same spirit.

Heavey likes it less because he personally is not into the sherry flavor, while Austen loves it because he can taste the mix of both whiskey and bourbon.

For Grant, this is the beauty of scotch. It’s amazing what scotch can mean to different people. As you try these different drinks, realize that scotch is not just scotch. It’s a culmination of different flavors. There are so many things to experience.