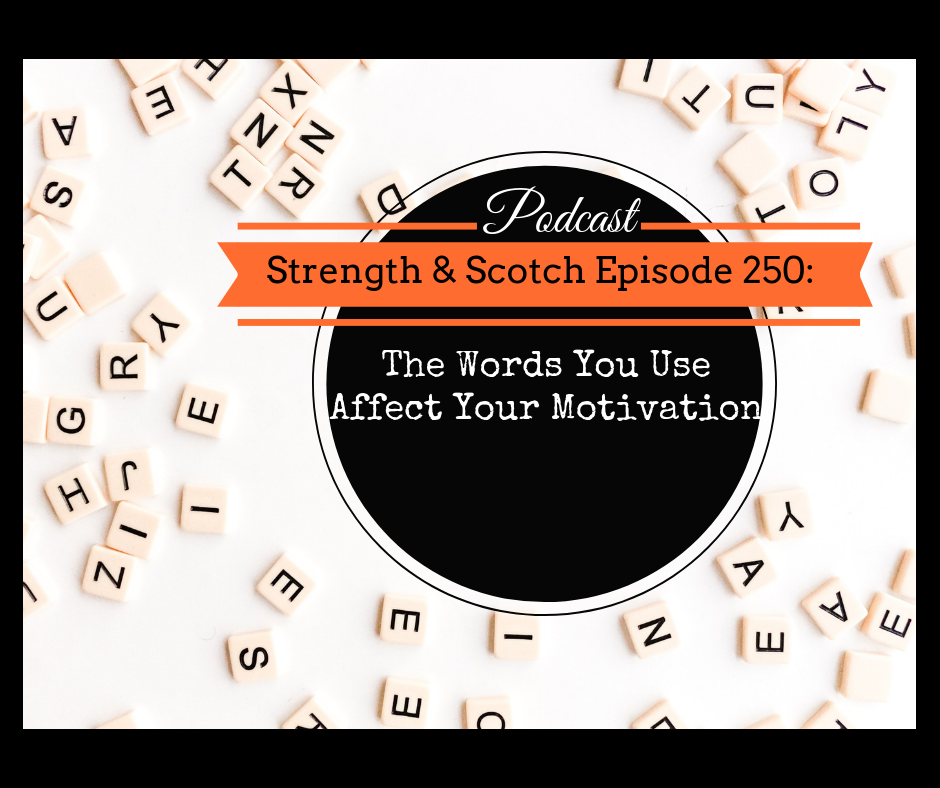 Grant and Heavey talk about how words can affect your motivation in terms of losing weight or maintaining a healthy lifestyle. Yep! It’s all about choices. Learn how language can impact and affect your choices. Plus, a small talk on Speyside whiskeys and the most expensive bottle of whiskey out there!

The problem that most people have with achieving their goals is staying consistent with whichever approach they choose.

Sometimes the approach is working and they know what to do but yet, it still wasn’t enough to keep them going long-term. Perhaps, they lost motivation and willpower, which are essential for maintaining consistency and getting results over a long period of time.

Based on the research called, “I Don’t” versus “I Can’t”: When Empowered Refusal Motivates Goal-Directed Behavior”, individuals frame their choices by saying “I don’t eat chocolate cake” compared to “I can’t eat chocolate cake.” The paper is essentially a discussion of four separate studies.

The authors believe that using “I don’t” frames the refusal in a way that’s empowering. This is a firmly entrenched attitude that the person has, and not a temporary solution or situation.

Whereas “I can’t” implies an external focus on the impediments a person encounters, hindering one’s ability to stick with their pursuit of whatever goal they’re trying to achieve.

Participants responded to a set of what they were told were unrelated questions. The researchers tried to assess the relevance of the goal of healthy eating for each individual participating.

The next day, they were told that each time they faced any sort of temptation, they should tell themselves “I don’t do X” or “I can’t do X” depending on which group they were in.

On their way out as they handed the answers to the questions, they were offered two snacks – one was a chocolate candy bar and the other labeled as a healthy granola bar.

Out of the people coached in the “I don’t” group, 64% took the healthy bar while 39% of the “I can’t” group took the health bar. So when you say “I don’t,” it’s a mindset shift, an empowered choice whereas “I can’t” seems like it’s not something that comes from within.

Moreover, they found that for people who didn’t care about their health, the “I don’t” and “I can’t” didn’t affect them. While those that had an interest in health outcomes, the “I don’t” framing was much more powerful.

[08:00] Study on the Influence of Internal vs. External Motivation

For the second study, they dug into the impact of internally vs. externally motivated goals. Participants were asked to imagine working out at a gym on a regular basis with a close friend for the next year.

After presented with this scenario, they answered a series of questions to assess effectiveness and empowerment.

The “I don’t” framing was found to be the most effective in ensuring that people would commit to going to the gym and had internally focused goals. They had the phrasing of “I don’t miss a workout because I’ve got to be healthy.”

Right behind that group was the group with the “I can’t” phrasing but with the external scenario. They say “I can’t miss a workout because I’ve got to do it for my buddy.”

Grant thinks it’s different for every person so you need to find out how your system works. Heavey adds that it’s more than the words on the surface and that the words have some meaning to us internally that drives behavior. This could be shadowed or enhanced by our own personalities.

The two studies mentioned above were more on questionnaires and assessing what people say they might do. But nobody was actually taking any action.

For this last study, they looked at 30 women that attended a health seminar designed for individuals with long-term improvement goals. They were encouraged to participate in a program where they would adopt a new strategy and they were to report on it after 10 days.

The participants identified areas they wanted to improve on and they were assigned to either “I don’t” framing, “I can’t” framing, and the third group being a controlled group was just a “no” group. They were instructed to continue with the strategy they were given as long as it continued to work for them.

Heavey suggests that anybody with an external goal could try the “I can’t” framing, but if you have an internally driven objective, then use the “don’t” framing.

You may know that you’re not internally driven to be healthy. It’s neither good or bad. You’re simply acknowledging it. Accept that and say you know that doesn’t work for you so you can then find these external motivators in your life.

On the other hand, if you know that external things don’t help you that much, then focus on the internal and use the “I don’t” framing.

Data suggests that people tend to match one another’s linguistics when they communicate. For instance, Heavey shapes the kind of language he uses to his clients based on their goals. He then tries to see if he could get them to mirror that language back and influence their motivation as a result.

Grant emphasizes the power of language on children and their development cycles. In fact, Heavey adds that language is everything. It’s how we perceive everything. It’s how we describe our world. It affects us dramatically. It’s used to manipulate us too and this is evident in the marketing world. When people are marketing to us, they’re using words designed to resonate with us.

Today’s whiskey spotlight is on Speyside. Four of the top five best selling single malts are all from Speyside, as follows:

The list above is based on volume. Based on value, Macallan is #2 because its price level is higher than Glenlivet.

Speyside is also one of the oldest scotch distilleries making single malts and blending them. Their oldest distillery dates back to 1786.

Heavey and Grant are drinking Speyside’s entry-level and the difference they’ve noticed is the higher price point. You can buy a bottle of Glenfiddich or Glenlivet at a $20-$30 range. Whereas their entry-level bottle is at a $50-$60 range of Macallan.

Interestingly, it’s not just the entry-level that’s higher. Macallan is also known as the highest-priced single malt at auction. Apparently, they sold a bottle for over $1 million in an auction. It was actually sold in 2018. It’s the Macallan Valerio Adami 1926 60-year-old. It’s currently the world’s most expensive bottle of whiskey.

[26:30] Popularity Based on Investment

Many people use these expensive bottles of whiskey that appreciate over time. People were always looking for a rare bottle of Macallan.

Nowadays, auctions already go through everything whiskey. That said, it was really Macallan that created this market. In addition, Macallan is also known for purposefully aging things longer.

Old whiskeys are expensive not just because they’re better or they taste longer. In fact, you even get less of it as it evaporates through the barrels over time. So the more you let it sit there, not only is it taking up space in your warehouse, you also get less out of there. Hence, a lot of people are not making a 30-year bottle or purposefully making a 60-year bottle. But Macallan did. Talk about forward-thinking and uniqueness.

Macallan’s fuller body, and sherry, sweet taste has also made this drink more popular. It’s a little easier to drink while still being elite. Grant describes it as an almost a luxurious mouth feel and flavor.

“I Don’t” versus “I Can’t”: When Empowered Refusal Motivates Goal-Directed Behavior