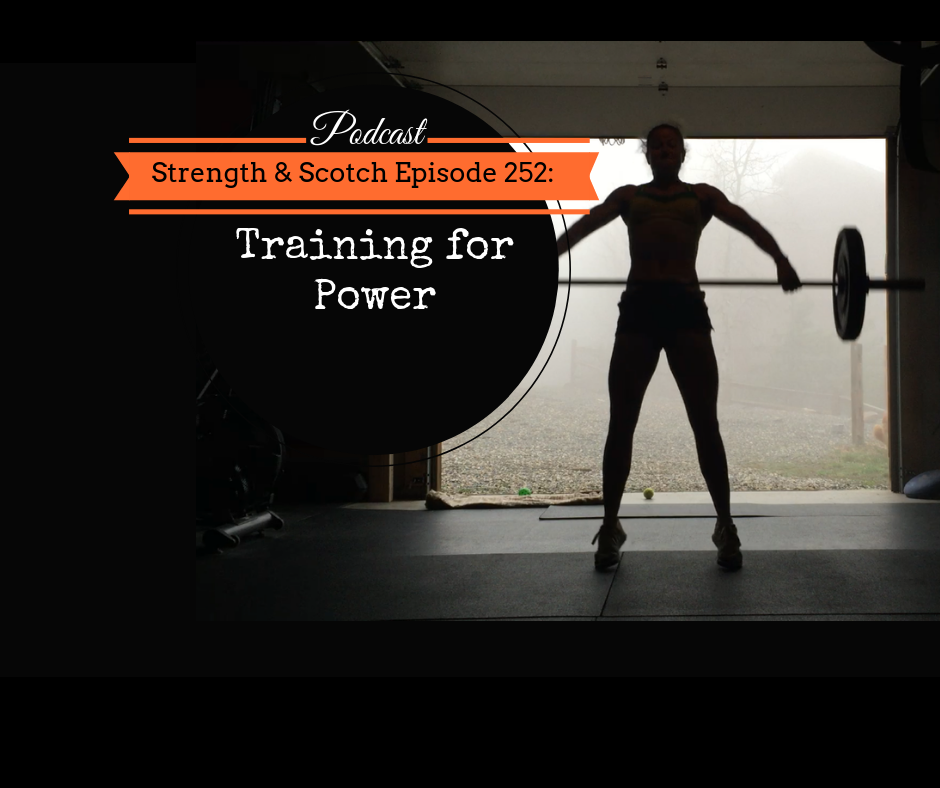 Today, Grant and Heavey talk about training for power, especially if you’re training for sports or you simply want to increase power in the gym. Learn more about the four different modalities for increasing power and whether these are some things you can do to maximize your training.

Power is an important component of athleticism. Power is force x velocity. It’s your ability to create force quickly. When you think about absolute strength, that means squatting or deadlifting as heavy as possible. That’s not power as the component of speed is not there. It’s just pure force.

One researcher calculated that for an elite level weightlifter (think snatch and clean-and-jerk), power output can reach around 4,200 watts. A deadlift performed by a similar caliber powerlifter (think deadlift, squat, and bench press) creates 1,300 watts. The power output was much less because there is less of a speed component to what a powerlifter does compared to a weightlifter. That said, weightlifters are amongst the most powerful athletes in the world. Power is an incredibly important component of sports training.

Grant used to play football in high school but he stopped because training continued even during the off-season. He recalls training in the weight room and running a lot of sprints. Squats, bench press, and sprints were the three main things he remembers.

But for the purpose of this discussion, we’re not talking about eighth-graders, but trained individuals. How can we focus their training to create the most powerful individual possible? Power is about creating force quickly.

[09:22] The Four Modalities in Training for Power

There are 4 known modalities in training for power:

Older studies tend to use jumping height as a proxy for power output. But this may not be the best proxy for measuring power because there’s a lot of skills involved in jumping. If somebody is a well-learned jumper, then their capacity to improve is smaller than somebody that doesn’t know much about jumping. So when you come across this kind of study, be careful about how you analyze those results.

Weightlifting involves doing tactical movements. It’s not just about strength, although it’s a huge component. You have to consider things like flexibility when snatching.

In a lot of power training, they will often do movement variations such as hang power clean, power snatch, clean pulls, etc. These are variations in the weightlifting movements that require less proficiency than the full movement and still develop power.

If you want to learn the full movement then that’s great. But it’s not absolutely necessary to get a lot of benefits from using Olympic weightlifting.

It may seem similar to plyometrics. Plyometrics are primarily unweighted exercises whereas ballistics are weighted versions of them. Ballistic training is absolutely one of the most powerful methods we have available for increasing power – but it’s underutilized.

Olympic weightlifting is a kind of specific ballistic component but the other element of ballistics is the “no deceleration” phase.

One common movement in ballistic training is the bench press throw. Essentially, when you normally bench press, you have to slow down as you lock out. But in the bench press throw, you’re accelerating all the way through and releasing the bar. There’s no deceleration phase here as you’re not slowing down.

Resistance training is an important way of increasing power too. The hard part for most people though is dialing percentages down to somewhere around 50% and not training to the weight you’re used to lifting but instead maximizing the amount of speed you’re creating with the bar.

So if you’re doing regular bench presses but working on driving as fast as possible off your chest, it’s not something a lot of people would do. To use resistance training in increasing power means to really focus on bar speed in some days of your training.

If you’re fully interested in increasing your maxes and don’t care about producing power, being quick, or being athletic, and you just want to be strong, increasing speed is still important. You can direct your efforts on not just max effort days, but also have some days focused on speed-based training.

Again, think about movements without the use of weights. In addition to increased power, plyometrics also help with your ability to switch from eccentric to concentric movements. This is important in sports like basketball or football where you have quick changes of directions or cuts so injury is prevented.

You don’t have to do all of that stuff but all those elements sprinkled within the context of a larger program can help you increase your power over time. Some people claim that when you move fast, you’re developing fast-twitch muscles which are most explosive and can lead to greater strength over time.

For instance, the NFL athletes come out of the full season where they’re just trashed. Heavey recalls NFL guys walking into the gym and not being able to squat more than 65 pounds because they’re so beat up. But two weeks into training, they’re tripling what Heavey can do.

Essentially, they’re putting in the groundwork for those guys for slow and steady training. After they’ve built them back up, they move more into explosive training as they tapered into being ready for the season again.

Grant sees a big advantage to focusing on power as a Crossfitter or even in other sports, which have a power component. It’s something that is overlooked often but an important and powerful part of your training.

Today’s topic is Aperol Spritz, a traditional Italian drink. Grant has been Italy for work previously, but not for vacation. So Grant and his wife are doing a whirlwind tour around Northern Italy.

Both Grant and Heavey put a priority on travel but in different ways. Grant goes on two trips a year while Heavey does a trip once a year. Four months ago, Heavey went on a sailing trip to the British Virgin Islands. Now, Grant is going to Italy for two weeks.

Grant thinks it’s important to experience other places and people, things, smells, and sights. Heavey also loves to connect with people during travels. Heavey and his wife love doing it low-key. They take trips in the U.S. But it’s the same internal drive that he gets from traveling. He’s attracted to people that are also attracted to people.

In traveling, cost and time are things to be considered. There are a lot of ways that you can travel and see new things and have new experiences affordably. Plus, traveling with a newborn is tough so Grant wants to be able to do a lot of travelling before that as much as possible.

That being said, there are people who don’t want to travel. Grant and Heavey don’t understand the reason for this.

Grant loves Airbnb as he gets to stay in people’s apartments. Heavey explains that traveling feels like having an explorer’s mindset. Grant adds that it’s a desire to see more than what’s in front of you.

Another big motivator for Grant to travel is food. He likes to travel places and eat their food and get authentic Italian or Spanish food. Exploring culture through their food is really interesting.

On the other hand, Heavey enjoys exploring the place just by walking. It doesn’t even feel like exercise to him as it’s cool to be out and see things and watch people. He wants to see what the local people are doing.