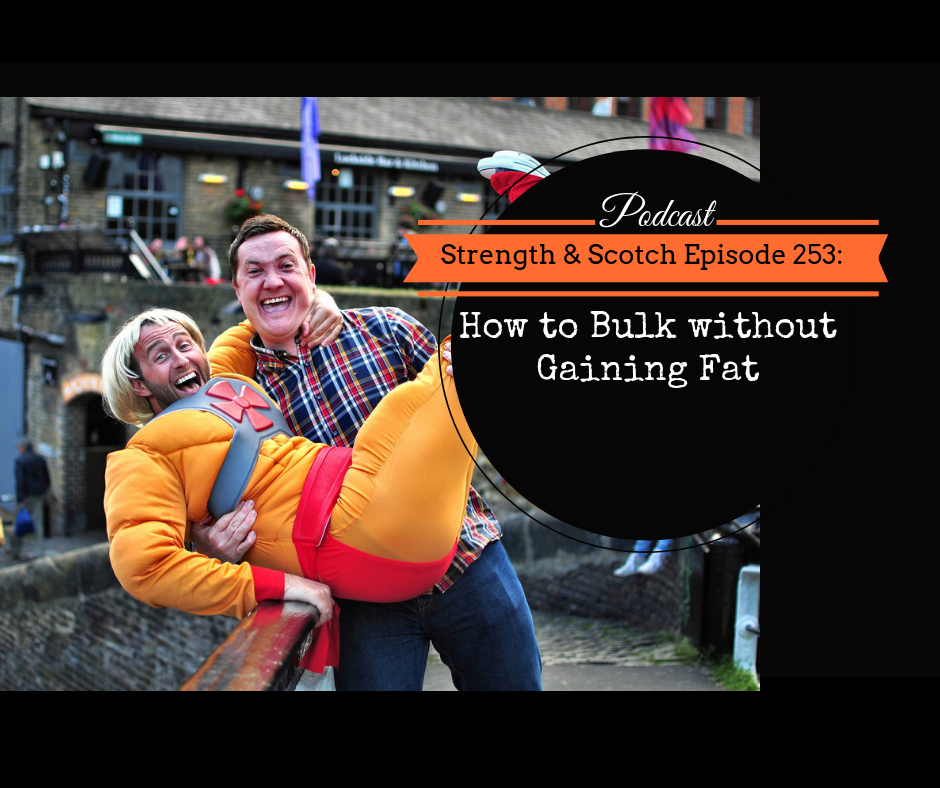 Grant and Heavey tackle the concept of bulking without gaining fat. Find out how much fat, protein, and carbohydrates you need to achieve this. Meanwhile, on the whiskey side of things, they’re enjoying a heavily peated, spirit-forward bottle which comes from another region called Campbeltown.

There is a solid strategy that people can apply to their lives if they want to add muscle most effectively without adding fat. Oftentimes, people think they can add as much weight as possible but that is actually doing yourself a big disservice.

Many bodybuilders are driven by the opposite of science, word-of-mouth ideas of bulking at all costs during the off-season. This makes the cutting phase so much harder and negatively affects performance.

Heavey presents a publication around Nutrition Recommendations for Bodybuilders in the Off-Season. Usually, when we talk about cutting or bulking, or any sort of outcome you’re interested in from nutrition, you’d usually start around the topic of total number of calories.

Calories are fundamental to bulking. The necessary amount depends on how active you are. This varies from individual to individual.

There are usually three goals in dieting: cutting weight, bulking, and recomposition. If you want to maximize muscle gain, you should put yourself into a caloric excess. It doesn’t mean you can’t build muscle in a caloric deficit but the conditions aren’t optimal.

If you burned 2,500 calories per day, the general recommendation for increasing your muscle mass without putting on fat is to eat 500 calories above that, which means consuming 3,000 calories. The number of calories you need in excess of your baseline or maintenance level varies dramatically from person to person. But the target where most people should begin is only half of that, which is 250 calories.

That being said, there are different factors that need to be considered. Training status or how advanced you are as a lifter is a big influence. One study showed that some newbie lifters were able to take a 2,000 calorie surplus diet and transformed that all into more lean mass and no excess fat.

As advanced lifters, your likelihood of being able to do that is very small. This is because you’re just closer to your potential and you’re more dialed in so there’s more consistency in your activity.

Across the board, 200-300 calories per day in excess is what you might want to target. If you’re someone who has a baseline consistency in what you eat, then you can just add a protein bar every afternoon and this would be the extra couple hundred calories you needed. Ultimately, this depends on your scenario and how important this is to you.

Heavey thinks that throwing caution to the wind and eating as much as possible, which many people do, is a poor approach. Monitoring calories is an ideal approach. It’s not about moderation, but getting the best results.

One key thing with picking your calories is monitoring your weight gain each week. That’s how you know that you’ve hit your stride. The other piece about calories is that the body adapts to it.

The way to monitor this is to track your bodyweight every week. When you’re looking to prioritize muscle gain over having excess fat gain, look at around 0.25% to 0.5% increase per week.

On the lower end of the spectrum is where an advanced athlete or someone who has been training a lot longer probably wants to hit as they’re coming closer to that genetic potential with their muscle mass. So if you weigh 200 pounds, and you want to gain, 0.5% is only 1 pound.

There’s a lot of fluctuation with the scale. The scale is susceptible to fluctuations like the amount of food that’s being digested, if you’ve used the restroom, etc.

The first piece to monitoring your progress is to be consistent. Pick certain days each week like Monday and Friday mornings. Right when you wake up, take a piss and jump on the scale right away and take that measurement. You haven’t eaten or drank anything, and you’re doing it on the same days each week.

If your weekends are crazy with a lot more sodium makes your body retain more water, all of that gets factored into. That being said, it’s still best not to rely on a single measurement.

Ultimately, find a way to track your weight over time despite that small fluctuation. Find that average and watch it trend over a series of weeks.

Heavey uses the smart scale. He thinks what’s so cool about it is that he doesn’t have to think. He just stands on the scale and doesn’t even look at it. When it’s time for him to think about what happened through the week then he looks at the number.

Monitor your weight and see how many calories you consume to have that steady weight. But don’t sit there and figure it out first since your body is going to respond to excess calories.

You need to eat and keep finding the amount of calories to get the 0.25% to 0.5% increase weekly and just cruise with that.

Keep doing what you’re doing if you already are at the stable spot and just add a little bit until you see the results.

The recommended amount of protein is 1 gram/pound of bodyweight. A lot of people can get away with lower amounts of protein, but there’s no real way of knowing if you’re one of them.

What worked for everybody in the study was 1 gram per pound or 2.2 grams per kilogram of body weight. This maximized their muscle gain potential from their training.

This number could be different for women where they might not need as much since they tend to have a higher body fat percentage than men.

If you’re on a plant-based diet, you might want to have more total protein to make sure you’re covering your bases. However, some people get carried away with the notion that you can’t get all the amino acids from a plant-based diet, but Heavey disagrees with this.

Low-fat diets may result in a modest reduction in testosterone. It’s not really clear if those changes have any real effect on muscle mass. To make sure you’re covering all your bases, do not go too low-fat on your diet. This is probably at 0.5 to 1.5 grams of fat per kg per day.

Some people suggest that Omega-3 fatty acids have an anabolic effect (building muscle). But this hasn’t really been proven yet. The researchers show there are a variety of health-related reasons where incorporating Omega 3’s are beneficial.

Carbohydrates are responsible for regulating thyroid hormone and fueling intense training. Low levels of muscle glycogen, where carbs get stored, can impair the number of reps that one can lift while doing their sets. So if that’s impaired, you’re pushing less hard in the gym, hence gaining less muscle.

One study found no difference between diets composed of 70% carbohydrate and a super carbohydrate diet, and 50% carbohydrate. They took this down further comparing it with 25% carbohydrate and this significantly affected performance. Apparently, more carbs aren’t necessarily better but consuming too few carbs is going to be a problem.

Moreover, the keto diet might not be ideal for someone trying to bulk. And even if you’re not getting in fat, you still need carbs to bulk up.

Work backwards by calculating your total number of calories. Add the extra 200-300 you need and then subtract the calories for your 2.2 grams (per kg of bodyweight) of protein. (1g of protein = 4 calories). Subtract the fats of 0.5 to 1.5kg (1g of fat = 9 calories). Whatever remains can then be used for carbohydrates.

Heavey recommends to just have those minimums in place. Then once you’ve reached your thresholds, then just do what you have to do to get your total calories.

Additionally, having some variability does make sense. You can do some sets where you can do 90% of your 1 rep in 3 sets. Then on another day, you can do sets of 15 at a lower percentage of your 1 rep.

The biggest thing is volume which is sets x reps x weight which you need to get up every month to achieve your goal.

They say that you need 90% diet and 10% exercise for weight loss. But in terms of building muscles, exercise becomes a lot more important.

In previous episodes, Grant has already discussed the regions of Islay, Highlands, and Speyside. They’re now going back down south to a region called Campbeltown, which Grant considers as the most interesting region. This will be discussed next week.

But did you know that there are only three active distilleries in Campbeltown? More interestingly, they lost their designation as its own region and only got it back when the third one opened.

One of Grant’s favorite distilleries in all of Scotland is from Campbeltown, called Springbank. If you want to follow along, get the newest one that brought the name Campbeltown back. It’s called the Kilkerran Heavily Peated Batch No.1. This is part of their Peat in Progress line. The bottles are not fully aged to a place they want to be.

Kilkerran is produced at a distillery called Glengyle. This distillery actually got shut down and brought back online. But the name “Glengyle” had been purchased by a different company and they’ve been using it for a different product. Hence, the Glengyle distillery is now using the name of Kilkerran for their whisky.

Heavey thinks it has higher alcohol content. Indeed, it’s almost 60%. While the typical spirit sold in the U.S. is 40%. This is obviously cask strength.

It’s got a young, malty, spirit-heavy flavor. The peat is certainly there, although it’s a different kind of peat. Try this or try the Longrow for a different take than that of the Islay bottles.

Interestingly, Heavey doesn’t think it’s that heavily peated. Now, if you’re not used to drinking whiskey at 40%, all you can taste is the booze. But when you get to 60%, the spirit can kill those taste buds.

Grant recommends adding a bit of water. That said, in a cask-strength bottle, the flavor profile changes and a lot of the flavors open up with a little bit of water to change that percentage.

Moreover, Grant thinks that age is the biggest drawback of this bottle. It’s so spirit-forward and so young.

Nutrition Recommendations for Bodybuilders in the Off-Season