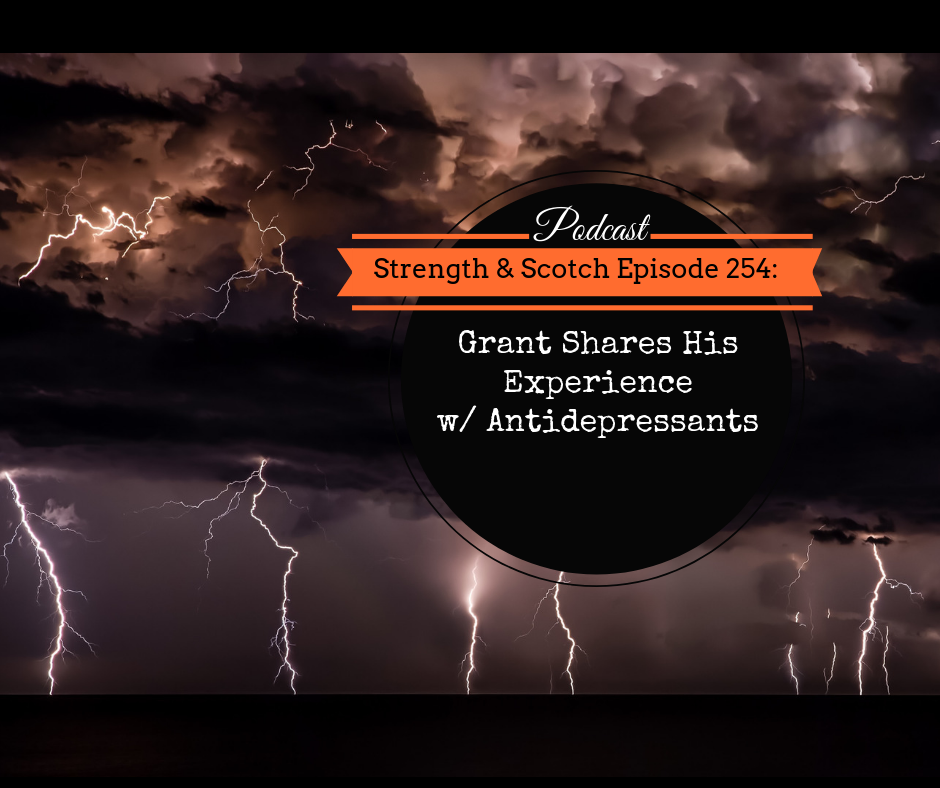 Grant and Heavey talk about depression which is a serious, ongoing problem that is growing around the country. It’s increasing in propensity amongst millennials, more specifically, so it’s very important to talk about issues like this. In fact, Grant has been going to therapy for a while. Today, he shares his experience with antidepressants in the hope of spreading awareness.

[03:35] When Prescription Med is the Only Tool They’ve Got

Grant has been prescribed medication for anxiety. He has a history of being on and off a drug called Cymbalta. It’s a drug indicated for depression, anxiety, fibromyalgia, neuropathy, chronic pain, chronic fatigue, and other conditions.

Heavey describes how medicine has advanced very far from bloodletting but it’s still very rudimentary in a lot of ways. There are people going to their doctor and being prescribed these because it’s the only tool the doctor has available. It doesn’t mean it’s the right or the best tool.

About 10-15 years ago, Grant went through a gnarly break up and he was depressed. He went to the doctor and was given the medication. It initially seemed to work and eventually, he stopped taking it when he felt better.

But when he stopped taking it years ago, he experienced a flu-like, brain-meltdown. He would have these brain zaps. Whenever he looked to the side or moved his head quickly, he’d get this electric jolt from his eyeballs through his brain. Sometimes he felt like collapsing.

He went back to his doctor because he didn’t feel good and was told to taper off it. A couple of years later, he went back on it because he started having anxiety problems as work became more stressful. He was expecting it to be bad but it got worse for him.

Grant describes how it’s like having anxiety and depression. It’s like you’re sad but it’s way more than that. You don’t want to do anything and everything feels hard. You don’t feel like it’s ever going to get better.

Anxiety, on the other hand, is when you can’t stop thinking and you get stressed no matter what you say, think, or do to resolve that stress. So you get to another level of stress. You can get stressed about everything. You find things to worry about and this impacts your life to where you stop being effective at the things you can do.

As work got more stressful for Grant plus some family issues, he was back on medication again. Then he went off it and then on it again, when everything was just not going right for him. He felt this tingling sensation on his hands and feet all the time. He knew something was wrong.

Grant was on SNRIs, which stands for serotonin and norepinephrine reuptake inhibitors. Another famous medication is Wellbutrin, which is also used for those trying to stop smoking.

Grant still experiences negative effects from Cymbalta. He kept having the tingling and had trouble sleeping. His heart would race and still had anxiety and panic attacks.

He absolutely understands why those struggling would want to take the medicine. In fact, he thought he was better at rock climbing when he was on drugs than when he wasn’t on it. There was more focus and he wasn’t thinking of falling because of the drugs. It eased his stress and anxiety.

There are a lot of people that need help and should go to therapy but they might also need medication. However, doctors often don’t do a great job of counseling on side effects.

Obviously, there are situations where both therapy and medication combination therapy are recommended.

As much as the side effects are bad, Grant believes that it’s better than ruining your life, losing your job, or worse, suicide. Do what you need to do to get help.

Based on Grant’s experience of taking these medications, he gained weight. He eats relatively clean and exercises a bit. He’s not that old, but he keeps gaining weight.

He is also on thyroid medication and the weight gain could be a result of the medication. He had a low testosterone test, which may also be the drug’s possible side effect. He feels tired all the time. The brain zaps are just a small piece of what he gets whenever he comes off the drug. Other symptoms include dizziness and irritability.

Heavey also points out that certain research showed that young individuals had an increased risk of suicide because they’re on it. It’s supposedly designed to help them. Yet ultimately, there’s a higher risk of suicide or suicide ideation.

Grant adds how this makes sense, especially at a young age where your hormones are all crazy and you’re already stressed. Emotions are heightened. So what works for a 30-year-old is a normal 17-year-old’s life. This would mean adding chemical imbalance to their already crazy hormones.

There was a massive class action filed against a drug company that failed to report Cymbalta’s side effects. Cymbalta had worse discontinuation effects because it has a short half-life.

Grant remembers taking 60 mg of Cymbalta and if he forgot to take it in the morning, he would start having brain zaps during his drive home.

Being off for a while, Grant admits to feeling like a freak when he had to taper off since he would count the little pellets. He noticed that he never felt adverse symptoms until he had none.

It has now been a month since but he still feels the discontinuation symptoms. The brain zaps have decreased. He would be walking, for instance, and a massive wave of nausea would hit where he feels like he’s going to faint or get sick. Eventually, it goes away.

Another side effect is that he hasn’t had good poops for a couple of years. The reason being is that his brain has been flooded with serotonin. More serotonin has your intestines move things through quickly. So as soon as you food is consumed and passing through the digestive tract, you start having diarrhea.

There’s still a stigma attached to someone taking medications. This is one of the reasons Grant is talking about this today. Heavey is wondering whether this could be because people who don’t struggle with this cannot relate since they’re not experiencing it.

Could Grant have resorted to other therapy or treatment other than medication? At that point, he just didn’t know what the right solution was. He thinks there is a failure in our medical system.

You believe that you can isolate these things. You believe you can separate emotions and events from yourself. In truth, it’s all connected.

If you need it, you need it. People should be more aware of the cost that comes with it. Seek help. Be aware that this is coming. As for Grant, he really wished he had gotten help sooner.

He wished he had trusted his wife, Heavey, and everyone around him about what was going on so he could talk about it more. Because even if you think they won’t, they will support you.

Even Grant and Heavey haven’t really talked about this stuff in-depth. Grant still has reservations in discussing this with him, even though he knows how open-minded Heavey is. This is the power depression has on people.

Campbeltown is a region that is historically one of the most important regions in Scotland. They had a lot of distilleries and produced a ton of whiskey. They even called themselves the “center of scotch world.” They prioritized quantity over quality.

In 1920, there was the Prohibition period where people stopped buying scotch and it hit Campbeltown the hardest. And the entire economy of Campbeltown distilleries died to the point that the region was no longer called a region.

They had rules in this “region.” You have to have enough distilleries to count. Kilkerran is the name of the whisky but the distillery itself is Glengyle. When Glengyle came online, it was the third distillery in Campbeltown. One of the marks to be called a region is to have at least three distilleries.

[31:40] Reclaiming the Region and Focusing on Quality

In 2004, they started production again and this allowed Campbeltown to become a region once again. The other two distilleries in the region are called Springbank and Glen Scotia.

Springbank is the biggest of the two. They have a whole line of Springbank bottles, including the Longrow, the heavily peated line.

Campbeltown as a region is known for 2 1/2 distillations. They do a lot of double distillation and a lot of triple distillation and blend them to create their own unique thing. Hence, what used to be quantity over quality is now a region that’s developing a new idea. That said, the product coming out of here is highly regarded..