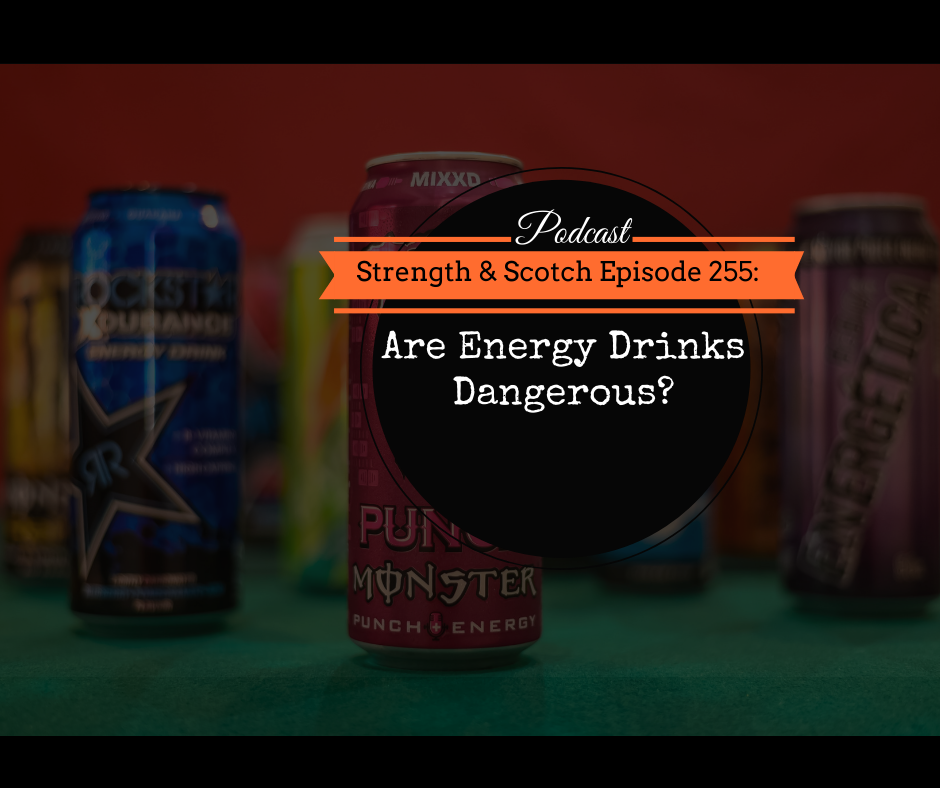 Today, Grant and Heavey talk about caffeine intake and what it’s doing to you. How much is actually considered safe? Find out whether taking energy drinks plus coffee at the same time is a good idea. Plus, know more about today’s bottle from Campbeltown!

Listener Steve asks about the energy drinks like Bang! and Brain. He further says, “They’re loaded with caffeine at 300 mg per can. This time of year, I like to drink them because it’s too hot for coffee. I limit myself to one a day in the morning when I do drink. As it turns out, these have sucralose, BCAAs. CoQ10, B vitamins, and electrolytes. Are there any negative effects to this much caffeine in a single dose?”

Grant was into rock climbing back in the day. Part of his routine was drinking a Red Bull prior to his climbing session. He’d have an extra one in his bag for when his energy was a little low. He’d also have Red Bull vodka as well as 5-hour energy shots which he ordered by the case online.

In the U.S., the average intake of energy drinks is 5-8 cans per month. Meanwhile, this question actually came in at a time when there were a couple reported deaths related to overconsumption of energy drinks.

The fear around this case is real. A recent poll found that 85% of U.S. parents favor regulations and warning labels for energy drinks.

Caffeine is actually toxic at levels around 15mg/kg of body weight. For a 150-pound individual, this works out to about 1 gram. But a level of around 10 grams for the same person could start to become lethal.

That’s a lot. There’s about 150 mg in a cup of coffee. You could be seeing problems starting to creep in around the 1 gram level.

The two studies measured real blood pressure effects from a dose of 355mg in one study and 480mg in the other. Another review suggested that caffeine can induce glucose tolerance too.

So it’s not just cardiac issues that we have to deal here with too but also metabolic issues that can creep in from energy drinks as well. This can be troubling in instances when you’re taking drinks with high sugar content.

The measured its effect on blood glucose is on the smaller side. Most people agree that consuming less than 400mg of caffeine per day is pretty safe for most people.

If you’re already pre-diabetic, the metabolic effects of caffeine are probably problematic for you. Or, if you already have high blood pressure, then the short-term effects of caffeine can be troubling. But for healthy individuals, consuming around 400 mg per day should be okay.

Heavey found another study that looked at an isolated effect from the most common ingredients found in energy drinks to see if any of them had adverse effects. Energy Drinks Induce Acute Cardiovascular and Metabolic Changes Pointing to Potential Risks for Young Adults: A Randomized Controlled Trial.

They looked specifically at caffeine, taurine, and a metabolite of glucose found to boost performance in rodents.

In the study, they measured a small, short-term elevation in blood pressure and metabolic changes from the caffeine, which is consistent with findings from the earlier studies. But that was pretty much it. There no arrhythmias noted or other serious problems observed.

They used 320 mg of caffeine. All the other components they looked at didn’t seem to have any adverse effects.

Again, this was a short-term study looking at one exposure to each of the ingredients. So long-term data is lacking. Also, the participants in the study were young and healthy individuals. Hence, it may not be perfectly transferable to somebody whose health is compromised in some way or someone older.

It’s possible that there are genetic variants that put certain individuals at greater risk for cardiovascular conditions from caffeine consumption.

It’s not uncommon for these substances to be consumed in large amounts under circumstances of low sleep, high stress, or increased alcohol consumption. Now, all of those things may adversely affect your cardiac measures. Hence, it may be this compounded effect that can cause problems.

Grant adds that if you have an energy drink a day with four cups of coffee and then you’re not sleeping a lot and you try to workout. It all adds up to the stressors on your body. You’ve got to do and take things in moderation. But with those components, moderation is not just that one drink but everything you’re taking in.

This week, we talk about Campbeltown, the region that the Kilkerran bottle is from. It’s relatively new on the scotch scene because it’s the third distillery that opened. But if you go way back in time, it used to be a main region.

These days, the three distilleries are Springbank, Glengyle, and Glen Scotia.

A little about Springbank. Springbank is the distillery and has two different labels. Springbank has a main line that is unpeated. They have a whole lineup from 10 up to 21 years. They are an incredibly high-quality whiskey.

If you’re looking for a high-quality scotch minus the peat, Grant highly recommends this brand. Another variant is the Hazelburn Single Malt. It’s a triple-distilled, Irish non-peated whiskey.

The third is the Longrow, which is heavily peated scotch. Grant and Heavey are having the first run of the heavily peated Glengyle called Peat in Progress. Longrow has been doing stuff for a while and they have an amazing 10-year bottle.

But if you like peat, go for the Longrow. Their basic is outstanding. It’s a no-age-statement. But every year, they do a different release called the Red Edition. They do extra aging in wine casks. So it’s got the bourbon cask with all the peat.