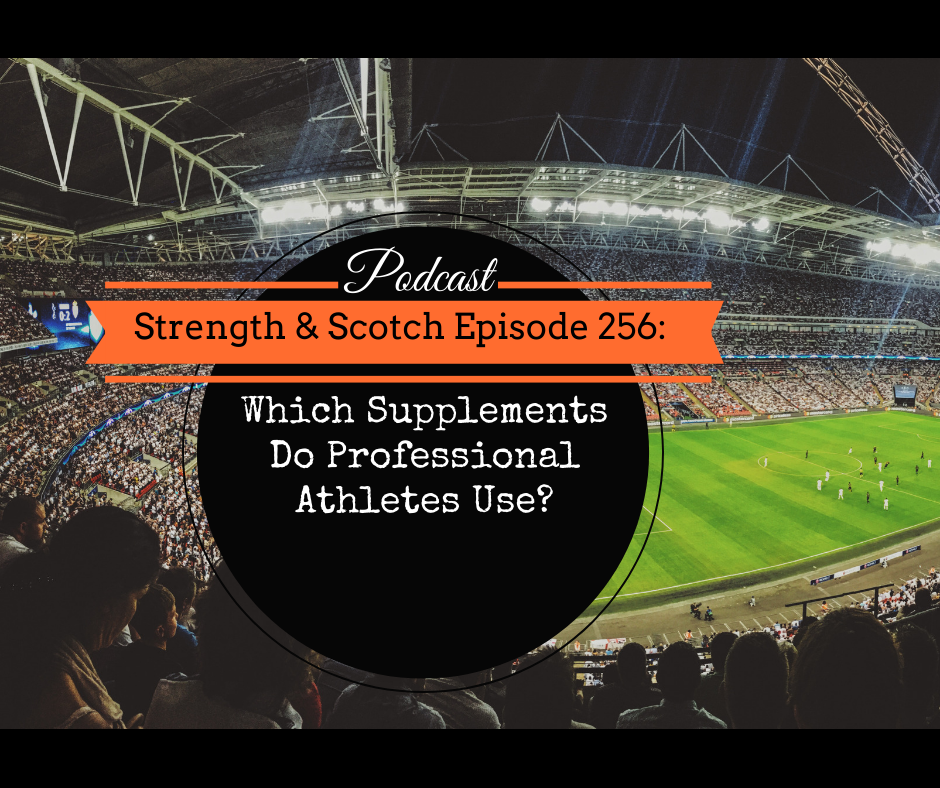 This week Grant and Heavey dive into supplementation habits of professional athletes.  What drives the pros to take supplements? Are they taking similar supplements to what you and I take?  Heavey shares his data on supplement use in various other sports around the world.

Over the years of this podcast, a large number of listeners have reached out to start working with Heavey and his team. If this is something you’re interested in, check out Evidence Based Athlete to set up a free consultation call  to see if it’s a good fit.

Recently, Grant has been taking collagen and Vitamin B. On the vitamin side, his guess is that athletes don’t have to supplement so much. They watch their diets so much with a whole bunch of people helping them to make sure they’re getting the right nutrients.

On the other hand, there might be other supplements that could help you too. Heavey agrees on this that people have certain health parameters and they’re working towards certain body composition goals.

A lot of supplementation is for that extra little one percent. It doesn’t really move a big lever, but only a small lever. That being said, most products are generally not worth it for ordinary individuals. But for athletes, that little lever may be the difference between them making the team or getting cut. This means that their ability to earn money, which can be big money, could be contingent on just that extra little bit of performance that could come from the supplement they decide to take.

The difference in having the energy or the strength to make that fourth-quarter basket or make that catch, that little difference – even if you’re good enough – is still worth it for them. Any edge at that level is so critical.

While Grant thinks athletes have their nutrition dialed in, Heavey thinks otherwise. Professional sports are catching up these days. But historically, athletes have heavily relied mostly on their superior genetics.

Grant may have to refute his own statement earlier, now realizing that his wife is currently working on a reality show with an NBA player. She saw how he and the rest of his team were eating atrociously.

A lot of professional athletes have a garbage diet. The estimates as to how many are supplementing with nutritional supplements are pretty wide. The ranges Heavey could find was 40% at the low-end up to 93% at the high-end.

Heavey found a study called What drives athletes toward dietary supplement use: objective knowledge or self-perceived competence? Cross-sectional analysis of professional team-sport players from Southeastern Europe during the competitive season.

They looked at 912 team sport athletes. One of their findings is that supplement use is actually less prevalent among older and more successful players. It’s the younger guys that think they need to jump up a level who are more likely to supplement than the studs.

Part of the need for supplementation is to fill a gap. It’s designed to be a supplement. It’s supposed to fill in the gaps for the things you’re not getting in your diet.

In the same study, self-perceived nutritional competence was a much stronger predictor of supplement use than the objective measures of competence.

The majority declared that self-education is the most important source of knowledge on nutrition and supplementation.

[14:11] The Downsides of Taking Supplements

Truth be told, some companies inaccurately label ingredients. Poor product purity can lead to them getting dinged for certain banned substances, which is a really big deal in a lot of sports.

The supplement they’re taking to get that 1% edge could eliminate or suspend their career. This is a real risk. If you’re going to take something for an edge, it should be in a calculated manner and something that should produce a real result.

Moreover, if you supplement with things you don’t need, there could be negative health consequences from that.

[16:00] Prevalence of Supplementation Amongst Men and Women

This is another interesting study looking at the up and comers, specifically 15-18 year-olds. They looked at 348 athletes competing across 18 different sports at the international level.

If you’re going to be a coach of a high-level young athlete, you may want to educate yourself on the topic because you may be their sole source of information.

Speaking of accountability, there comes the danger of supplementing for young athletes because the person who holds that kid accountable is the person telling them to take it. If they don’t know why they’re taking it and just swallowing pills, that’s a dangerous thing.

Moreover, kids can be susceptible to influence as well. There’s added danger for children taking supplements.

In this study, they looked at 527 high-performing athletes participating in team and individual sports. 64% used supplements. 18% of the supplements consumed amongst the group had been rated by the International Olympic Committee (IOC) consensus to have a low level of scientific backing.

It’s not uncommon at all for professional athletes to take supplements and fall prey to marketing, science, and all that crap.

The study found that 45% of these athletes purchased their supplements from a store. 42% of them did not consult with any professional to determine their supplement regimen. 81% of these people were unaware of any platform to check the supplement safety and quality.

Again, these are professional athletes who are tested and this is a very real concern. These people should know of sites like Labdoor that perform independent testing and can show them that these supplements are most likely to be clean.

Grant made a valid point in how professional athletes also make the same decisions as regular individuals, protein being an important supplement. For people not getting whole food sources of protein in their diet, supplementing with it is a great step.

Heavey takes protein on a regular basis. Other supplements that top his list for regular intake include creatine and magnesium.

This is Week 4 of our featured scotch – the Kilkerran Heavily Peated Single Malt bottle called the Peat in Progress.

Today’s topic for this segment is sports. Grant feels the MLB World Series should be big news yet it’s totally overshadowed by the NFL and the NBA. Heavey thinks nobody cares about baseball unless it’s local and except for a few major franchises like the Yankees.

Finally, their final verdict on the Kilkerran? They love it but it’s been tough for them to be drinking 60% whiskey in the last four weeks. So don’t be afraid to add in a little water to it.

When Does Collagen Supplementation Make Sense?

What drives athletes toward dietary supplement use: objective knowledge or self-perceived competence? Cross-sectional analysis of professional team-sport players from Southeastern Europe during the competitive season

Prevalence and patterns of dietary supplement use in elite Spanish athletes