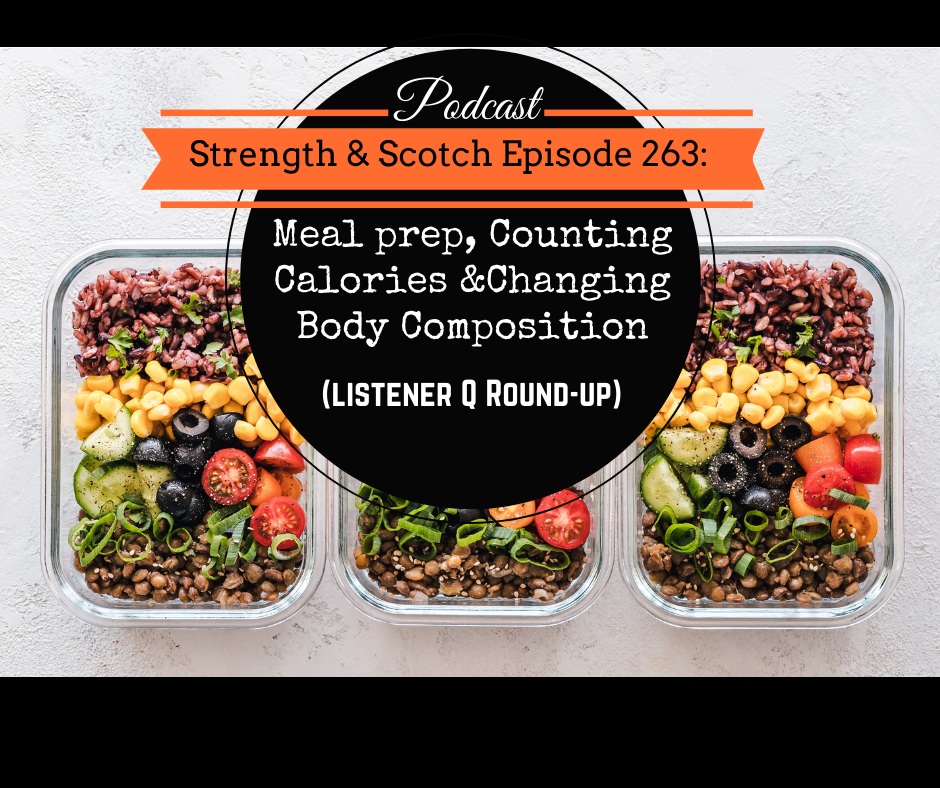 Today, Grant and Heavey, along with their very special guest, Heavey’s wife Nicole, are doing a listener roundup around body comp, meal prep, and counting calories.

Nicole is the head coach at Evidence-Based Athlete. She is the perfect person to give insights into these listeners’ questions.

[04:00] What Happens at the Heavey Household

Heavey and Nicole meal prep both their lunches and dinners. Meal prep means they prepare their food ahead of time and  is packed in containers- ready to go throughout the week. For dinners, they make sure there’s protein cooked for the week. For each day, she’ll cook sides like veggies or starches.

On Sundays, Heavey typically grills up a week’s worth of chicken breasts. Nicole chops them off and puts them roughly in the same proportions in the Tupperware, along with some starch like a white potato or sweet potato (sometimes rice), and some frozen veggies. All of them get into the freezer. Then everyday they get a Tupperware from the freezer and put it into a microwave for a hot meal.

One thing they do is smoke brisket on Saturday or Sunday. Then, they’ve got 15 pounds of brisket for the week for two people. On Sunday, they can enjoy slices of brisket and salad. They take the leftover brisket and eat it throughout the rest of the week.

Then on another night, they chop up the brisket and get other fixings for tacos and make brisket tacos. Another day, they might make a different type of salad with the brisket chopped up and tossed into the salad.

They also do pizza night on Fridays. They make homemade pizza. And, if the brisket makes it all the way to Friday, it gets on the pizza too.

Heavey is not looking to prepare his own meals specifically for strength. His diet is mostly protein and veggies. You don’t want to be in a caloric deficit if you want to optimize recovery and performance from a nutritional perspective.

If you want to get the most from your strength training, you want to meal prep in a way where you’re not in a caloric deficit. Make sure you include adequate protein to your diet. Add some coconut or olive oil to your meals to up your calories really easily.

If you’re looking to lose weight, try to reduce your carbs if that helps you eat fewer calories. But if you really want to align your diet for performance, having adequate carbs does make sense.

[10:30] Would Cooling and Reheating Food Over and Over Reduce the Nutritional Value?

Frozen produce is some of the best you can buy. Microwave is one of the best formats for heating and not losing nutrients. They don’t have anywhere to go so all it’s doing is heating up the water molecules.

People naturally have inherent activities throughout their day, otherwise known as NEAT or nonexercise activity thermogenesis. People are constantly moving (this includes fidgeting, getting up and walking, etc.) and all those things add up to calories being burned throughout the day. We’re often not even aware of it. You can’t control it. It happens on a subconscious level. Obviously, you can’t stop being active especially if it’s part of your job.

Heavey doesn’t recommend weight gainers because oftentimes, there’s a bunch of other crap in there that you don’t need. It’s a waste of money because you can get calories at a lower cost.

At the end of the day, look to eat more calories that are less filling. Add things like olive oil as there are more calories in a gram of fat than a gram of protein or carbs. You can also eat nuts, rice, and potatoes.

Previously, Heavey looked at the validation attempts of the calorie counts on the most popular fitness devices over time. Some of the fitness devices were very good at measuring your heart rate. But across the board, all of them were terrible at calculating calories burned for the day.

The absolute best way to figure out what someone needs is to log a full week of food and eat as normal as possible for seven days. Take the average of those seven days and see where their weight is. If you do that for 1-3 weeks, you’re going to get good information about exactly how many calories would be your maintenance level if your weight is still the same. Then you chop calories off and make adjustments from there.

You could count all the calories burned all you want but in reality, it never works out that way. No two bodies are exactly the same. Even if you estimate your calories where you figure out your specific number, if you don’t reduce your number of calories and expect to lose a pound and a half per week, that’s not going to happen either. Even if you do lose that many pounds, your body will adapt.

Even though you think you’re reducing your number of calories and you’re on a 750-calorie deficit, your body thinks it’s being deprived of calories. It’s going to try to survive so it’s going to reduce the amount of fidgeting you do in a week, and inherently, you’re in less of a deficit. This is when people get frustrated with their results.

Make sure you continue to stay active outside of exercise by tracking your daily steps. This is a proxy for daily activity level. If you have baseline data on your daily steps and start aggressively dieting, you might see that step count drop. Seeing that data, you can recognize it and set a goal for whatever number of steps and shoot for that goal to maintain it. It doesn’t have to be perfect but at least it targets one of them.

There’s no reason to avoid fasting, which can be beneficial when we’re trying to reduce the number of calories that we’re consuming. It’s not that fasting does something magical to your body. It’s just that you’re reducing the number of hours to take in food so you’re eating less calories.

[31:42] Recomposition During a Caloric Deficit

If you’re not losing weight and you’re consuming what you think is, say a 750-calorie deficit, perhaps your body has adjusted. It’s possible that you’re consuming a caloric deficit but not as large as you think.

It’s then possible for you to go to a recomposition phase where your body weight stays the same. You’re adding muscle and losing fat. This is great especially if you’re not trying to lose a ton of weight and just a little bit of fat. If you do see muscle gains, keep doing what you’re doing. But if you want to be more aggressive, it’s very likely that you would need to increase your caloric deficit. As a general rule, be at as small a deficit as possible while making progress.

Also, you may think you’re not losing weight. But check how your clothes are fitting. Because if you think you’re getting stronger and your pants feel loose but you haven’t lost weight, then that’s awesome!

If your weight stays the same but you want to know that you’re making progress, then monitor your waist circumference and neck circumference. It’s a proxy for body fat percentage. Taking pictures is also very helpful to check how much you’ve improved.

The boys are enjoying a bottle of Arran from the Islands region. They just opened their second distillery on the island where they’re making exclusively peated scotches. Most of the Arran lineup is very lightly peated.

This new distillery is called Lagg and they just started distilling in 2019. So it will be a while before you can actually buy those bottles. But this is exciting news!

One of the reasons many people don’t do peat is that it’s very hard to use the same equipment to make a peated malt and a non-peated malt since the flavor sticks there.

Arran is relatively young. They just started their operations in the middle-late 90’s. Historically, they were the center of distilling with over 50 distilleries in the early 1800’s because it’s much closer to Glasgow and Edinburgh.