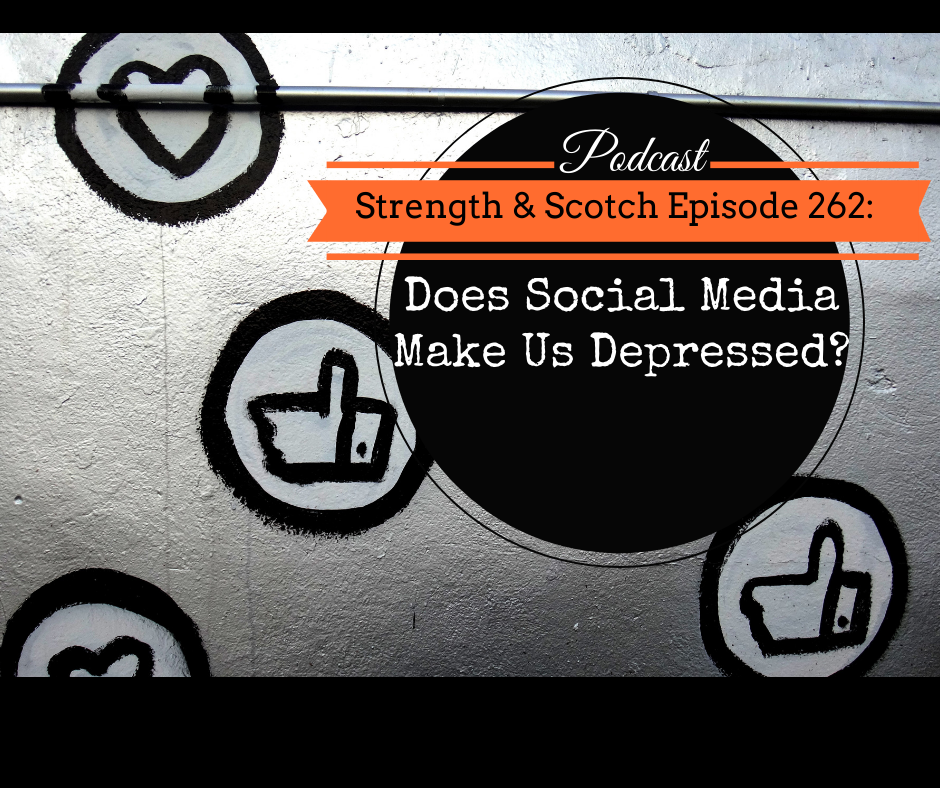 Grant and Heavey talk about social media and its effects on mental health. Are you the person who’s afraid of missing out or someone who’s into selfies? Are you following a lot of strangers on Instagram? Well, check out this study on how Instagram is associated with depressive symptoms.

Are you feeling stuck in your workout? Heavey can help!  Check out strengthandscotch.com/coaching to apply to be coached by Heavey and his team at Evidence Based Athlete.

Heavey presents an article from the Wall Street Journal called The Lonely Burden of Today’s Teenage Girls. Social media affects both males and females but the emphasis of this article was on the impact on females.

They said that teens spend between 6 and 9 hours a day online. 72% of teens feel manipulated by tech companies into remaining constantly connected. 36% of girls report being extremely anxious everyday. The percentage of college Freshmen girls that experience a panic attack doubled from 31% in 2011 to 62% in 2016. The article implied that this is in part due to social media.

One hundred girls were interviewed for this study. One of them, a 13-year-old girl, would go to bed after being online all day would feel unhappy, wondering what she did all day long and would wake up to do the exact same thing the next day.

Not every kid deals with depression, but there is something fundamental to this topic. As a society, we can learn to put limits on it since these apps and programs are new to society. It’s like Pandora’s box where you can’t put everything back in the box once it’s been exposed to the world. Once it’s out there, we must start to learn how to manage, control and understand it.

At some point, hopefully, we’re able to figure out a way to help cope with it better. Conversely, there’s also a stigma where parents could be seen in a bad light if their teenage kid doesn’t have a smartphone like all the other kids. But Grant thinks this mentality is not going to last for a long time. People are starting to be more aware of the issues regarding social media with young, impressionable teenagers.

Interestingly, a lot of these same factors extend all the way to adults, whether you’re a 20-year-old in college or a 30-year-old with a career. You’re able to see others more successful than you are. They’re having kids while you’re struggling to have kids. Or, they’re going on an amazing vacation and you’re just trying to pay your bills. It can be a never-ending cycle of trying to keep up with everyone else.

Even with those in more advanced years who could be in their 50’s and see their peers starting to pass away. 70-year-olds can get upset over Facebook posts when political views are being posted. Ultimately, it’s a bigger question of how we’re letting another voice into our lives. How is the content we are consuming affecting our own well-being.

Grant and Heavey share their own social media behaviors. Grant actually closed his Facebook account because he was severely affected by all the crap going on during the last presidential election cycle. He started thinking less of people that he really liked because of the stuff they were saying.

Grant still uses Instagram occasionally which he feels is a little more lighthearted. People are less serious so it’s fun. It’s not as much of reposting articles, opinion pieces, or agendas. Topping Grant’s list of his favorite social media platforms are Reddit because it’s anonymous, and Twitter.

Heavey, on the other hand, has an OCD tendency to feel this need to always be up to date on his feed, which still happens to him today. If he goes into Twitter, he has to see the whole feed. Over the past couple of years though, he has removed everything that’s not adding value to his life.

Because of social media, there’s now this trend where people feel like they’re missing out or that they feel unsuccessful or less than because they’re comparing themselves to some idealized version of somebody else. This goes to an extreme when you’re comparing yourself to someone who pretends their life is amazing. This is incredibly detrimental to mental health, and especially detrimental to someone who is still in their formative years still trying to understand who they are.

[24:15] Creating a Community Through Social Media

Of course, the Strength & Scotch Instagram account is highly active since engagement is HUGE. In fact, they found that so much interaction and engagement through DM was on Instagram.

Facebook used to allow you to create a community to bring people together. But, it has changed. If you have a Facebook group, there’s a high chance that most of the people would not see your particular post because they want you to pay for it now. Heavey thinks that while it was a useful tool at some point, it changed into a different tool.

Moreover, Grant points out that people are not curating their own content. We are being fed content with the idea that we’re directing it. But in truth, we’re only giving them information on how to market or present other content to drive revenue.

They found that the more strangers that one followed, the more likely they were to engage in negative social comparison behavior, which is a behavior connected with increased depressive symptoms.

Interestingly, those following the fewest strangers actually engaged in positive social comparison. But if you’re following people you don’t know, you’re much less likely to feel good about yourself and your life.

And, that’s how it all started organically. If you go back to the beginning of all these social networks, it’s because you wanted to connect with your friends. The further that we drifted from that and the more people have tried to leverage that platform for commercial gains, the less we got connected to real people.

The real takeaway from this study then is to follow the people you know and love. Unfollow everybody else and you’ll be in good shape.

Islay is an island of Scotland that gets its own region because of how many distilleries exist on that one island. And all of the rest of the islands have their own region. Take Islay out of the equation and put all the other islands and that’s when you get the Islands.

Today, Grant and Heavey are having the Arran Malt from the Isle of Arran. Entry-level is $40-$50. He thinks this is one of the better scotches that’s unpeated for its level of complexity and value.

Grant would describe the drink as creamy. There is a hazelnut flavor also that you might not taste at first. It may take a while to develop a palate for that or you might want to add water to help change the flavor. A little bit of water will indeed open it up. Heavey likes this overall. It’s creamy yet other levels of complexity to it. There are different phases of the flavor which makes it stand out.

—————————-
Are you feeling stuck in your workout? Heavey can help!  Check out strengthandscotch.com/coaching to apply to be coached by Heavey and his team at Evidence Based Athlete.