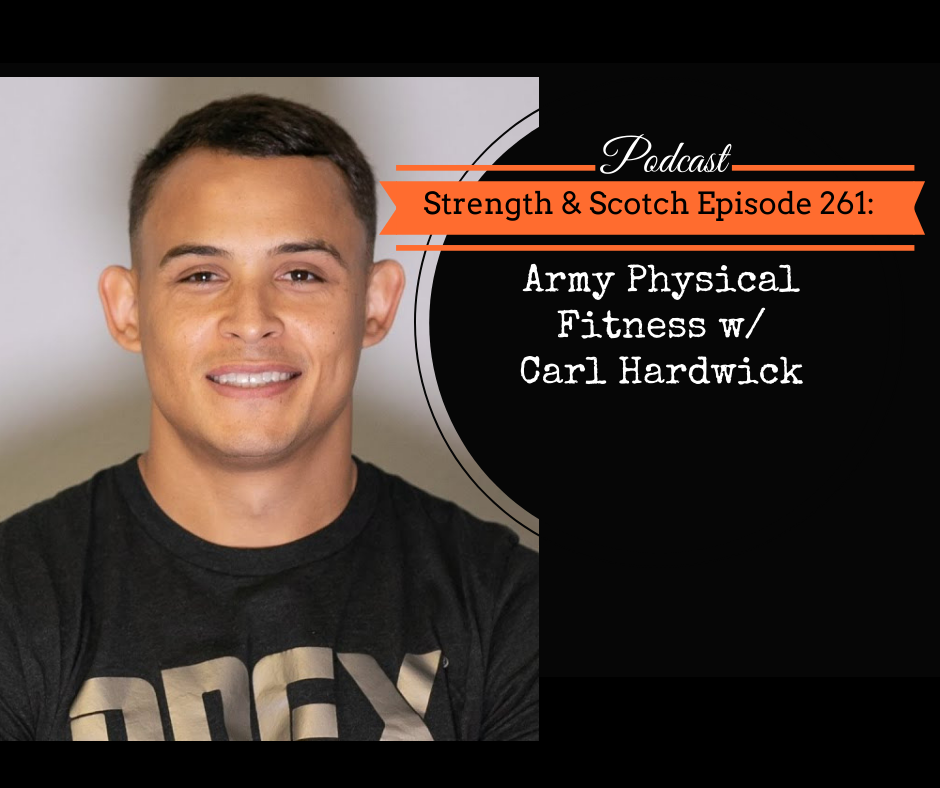 Grant and Heavey talk about getting army fit with special guest, Carl Hardwick, a military veteran and current COO of OPEX Fitness.  Carl joins us to discuss physical training in the military as well as his thoughts on preparing for the New Army Combat Fitness Test.

Carl has a vast amount of experience in the Army fitness space. Sport and fitness have always been a part of his life but he noticed he grew less fit as he was going through basic training (while everyone else was getting the fittest they’ve even been in their lives.)

Carl was part of the airborne infantry regiment based in Anchorage, Alaska. Seeing the fitness situation, he had a conversation with his commander and was ultimately put in charge of 1,200-1,500 soldiers, designing training programs for each company. This became his full-time job from 3 am to 7 am. Then, he did his real medical job throughout the day.

Prior to joining the army, he got an Exercise Physiology degree in undergrad as he wanted to be a collegiate strength and conditioning coach.

Upon joining the Army, he found the physical fitness test to be easy considering his background.

In terms of the physical aspect of being a soldier, there is resiliency built from exercising. It’s not how many pushups or situps you can do or how fast you can run, but how quickly you can adapt from doing work.

You’re in this fight or flight mode the entire time because you don’t know if you’re going to step on something that would remove your body from your legs. You don’t know if someone’s going to open fire on you out of nowhere. So you’re in a state of hyper anxiousness that you have to deal with over and over and over for a year, 18 months at a time.

One thing they implemented in their battalion to save the CNS, a well-designed training program. They think they’re some of the fittest people in the world, but Carl reveals this is far from the case. Because of this, he saw an opportunity to make an impact on their world.

[14:20] Designing the Program and Setting Up the Gym

A military organization is huge. To actually build a structure around that is large undertaking. What structure looks like in a lot of these institutions is doing PT from 5 to 7 am. They eat at 8 am and the schedule goes from there. Timewise, it’s all rigidly structured.

When he came in, they took people that had weaknesses in any area of the test. They built training programs to bring up whatever was low. That said, they were designing the program for a group of soldiers because it was so hard to individualize that on that scale as they didn’t have the manpower. They didn’t have the time nor the equipment.

Additionally, they found an air force hangar that they turned into a gym. As a result, people were getting better. They sent really fit guys to deployment and that definitely felt good for Carl.

Finally, after 30 years of the old test composed of pushups, situps, and running, they replaced this with a new six-event test. According to the Military Times, the Army Combat Fitness Test is actually now official. Anybody who is registering to join the army as of October 1, 2020, will have to complete this test by the time they graduate.

Carl thinks this new Army Combat Fitness Test is much better than the old one. He likes how well-rounded it is as they get to test the strength, power, and agility. Overall, it’s a good step forward.

Moreover, he thinks this elevates testing the soldier to see their potential and how good they would be when they’re overseas.

The military has been beta testing this for a while now and they’re taking it really seriously. Before this became official, they tested this on 63 battalions. It’s gender-neutral, which means they don’t have a male and a female scale.

Back to the test, they found that 70% of the men passed while 84% of women failed. One of six events proved to be the most challenging which was the leg tuck.

The training officer clarified that the results are from people who aren’t training for this test. They were just beta testing it and seeing who passed and failed. Grant points out how this has a bit to do with technique too.

[31:30] How to Prepare Yourself for the Military Outside of Fitness

Carl says that the best thing to consider if you’re someone interested in doing this is to understand what you’re signing up for, especially considering all the mental problems and emotional problems you may have to deal with coming back from overseas.

A lot of guys and girls get into the military and when the rubber meets the road and it’s time to really do this thing, they get cold feet. This is when people begin to fake injuries or have emotional issues. Be ready for the worst possible thing in your brain before you sign on that dotted line.

There are a lot of jobs and disciplines in the military. The best way to prepare for it is to sign up for a job that you’re passionate about and a job that you want to do. Understand what you’re signing up for, specifically for your job.

Ultimately, fitness is very important. Your stress bucket can get completely overfilled and you won’t know how to deal with emotions. You really have to take care of yourself.

That being said, a lot of the soldiers that did it for the right reasons came out pretty good on the other side.

Whether it’s for financial gain or to pay off student loans or to make your way through school, it’s great that you’re serving your country. But if that’s the only reason you’re doing it, Carl thinks you’re more likely to fall into that unfulfilled, depressed group of people. If you’re doing it just for that, it’s going to be a tough 3-6 years.

After Carl finished his round in Afghanistan and got back to Anchorage, he was looking at the next step in his life. He got accepted into PA school but his order got changed so he ended up staying in Alaska for another year to make the next round of PA school.

As a transition plan, he accepted an instructor role in Fort Jackson, South Carolina where he and his family moved to. He taught while he was down there and opened up a couple of gyms. Then came the OPEX gyms where he was the first one to open up an OPEX gym in Columbia.

He then started to do mentor work for OPEX and some coaching until he grew into his position as a Director of Operations, and now holding the COO role.

Check out the new Army Combat Fitness Test on YouTube.