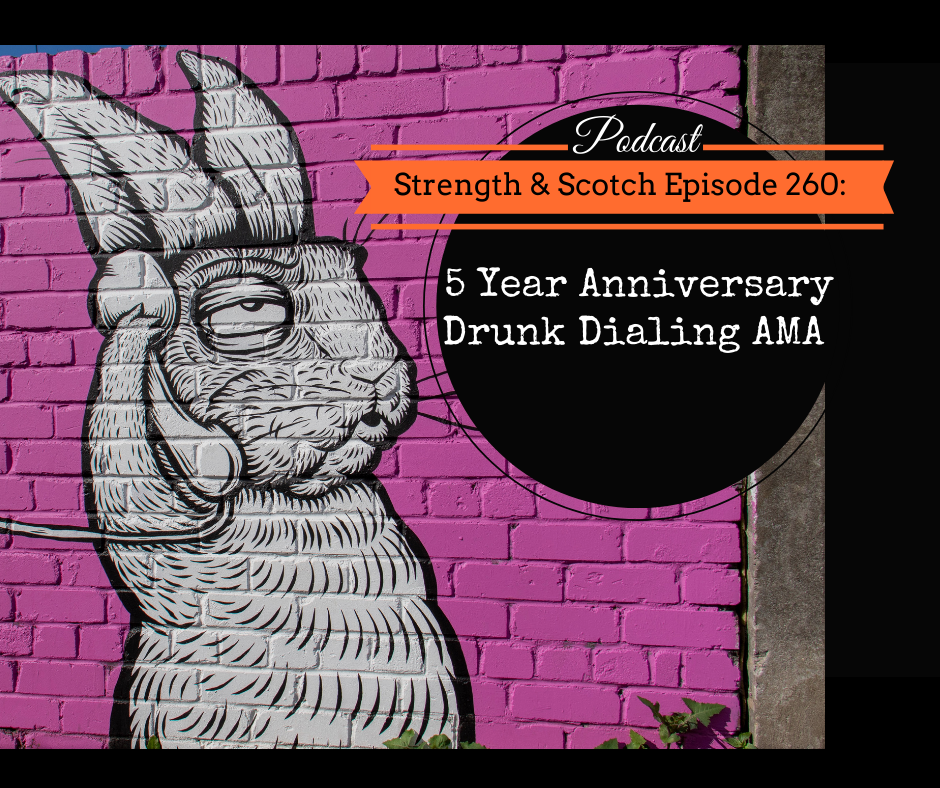 Grant and Heavey are celebrating FIVE YEARS of the Strength & Scotch Podcast! The community is getting bigger and bigger. So, there’s absolutely no reason not to continue on!

Thank you to all the listeners who reached out to the show. As a fun way to give back and celebrate their 5 awesome years, they’re drunk dialing some listeners.

Would you rather Grant or Heavey: If Rob were stuck in an elevator, he’d choose to be with Grant over Heavey because he likes to drink so they both have something in common.

Rob’s question: What is the one alcohol that Grant and Heavey had a horrible experience with that they won’t drink it anymore?

Heavey’s answer: When he was in high school on Halloween night, they opened McCormick 120 vodka, which they’ve never had before. He got very sick that his friend had to call his parents and that’s when they found out he was drinking. He was vomiting everywhere. They had to sit up next to his bed overnight to make sure he didn’t choke on his vomit. The next day, they sent him off to work and he vomited all over himself in his car.

Grant’s answer: He was with his rock climbing friends and the guy he used to climb with smoked a lot of weed and nobody else drank. He had a handle of Jose Cuervo tequila but at the end of the trip, he drank the rest of it. He didn’t remember much of the night at all. What he did remember though was waking up not in his sleeping bag but on top of it. The sleeping bag was covered in blood and he found a massive, deep gash on his foot that was also full of dirt. He must have gone walking in the middle of the night- super drunk.

Rob’s story: He was drinking a Jose Cuervo Gold poured into a water bottle. It was added with a sugar-free liquid to make it taste like Gatorade  and ended up puking everywhere.

Ken’s question #1: How did Grant and Heavey get into podcasting?

Answer: Heavey came to Grant at one point saying he was thinking of doing a podcast and asked if he wanted to do it with him. He wanted to talk about health and fitness. Grant didn’t know anything about it so they tried to find something fun to talk about. They tried the actual drunk conversation thing and that just didn’t work.

Ken’s question #2: Outside of scotch, what is your go-to?

Answer: If Grant is not drinking scotch and wants a cocktail, he’d go for a nice, dry gin martini. If it’s a hot day outside, he’d get a beer. For dinner, Grant is a big fan of wine. He tends to lean towards the French wines.

Heavey, on the other hand, doesn’t care for any kind of hard liquor outside of scotch. So if he’s drinking and he’s not drinking scotch, you’d see him drinking either beer or wine.

Ken is more into bourbon than scotch. But he has never turned down scotch. Like Grant, he’d be drinking anything that’s out there, but he also brews himself. Ken’s go-to bourbon is Maker’s Mark. Grant recommends the King’s County in New York.

Steve actually expressed how he appreciated the show they did back in Episode 254 talking about Grant’s depression because he has dealt with mental illness, too, having been a cop for 30 years. Grant has also gotten some emails from other listeners and this is a great thing. Steve lost two very close friends to suicide and this was something very prevalent in his former profession. Being able to talk about this is super important!

Steve’s question: How much sex is too much? Steve is 53 years old and his wife is much younger than him and he thinks he can’t keep up anymore.

Answer: On a physical level, Grant doesn’t think you’re going to hurt your testicles or reduce your ability to gain erections. As a male, it’s important to have regular orgasms due to prostate health. But too much can happen in a relationship/emotional/mental level if both partners are on different pages as far as how much they want to be intimate together and if they don’t see eye-to-eye on what the relationship should look like. So the “too much” question is almost the same as the “too little” question. What it really comes down to is a communication question. You guys have to talk and make sure both understand that it’s beyond the physical.

Whether you lose certain essential minerals out of your body when you drain too much, Heavey doesn’t have any data on this but he doesn’t think there would be a problem with it. In the worst case, you could supplement with a little zinc.

Grant and Heavey are having an Ardbeg Uigeadail bottle – it’s damn near the peatiest of whiskeys. The Octomore line from Bruichladdich is known to be the most heavily peated.

So what’s next? More to come, definitely. There is so much to talk about. Let us know what you want to learn about or what the show could be for you. Grant and Heavey are going to keep doing what they’re doing but they also want to give you what you want to hear.

To be honest, they have almost a year’s worth of questions, which is nice but please be patient with us as we’re trying to work through our backlog.

Heavey loved the time when they recorded their 100th episode when they did a live session with 40-50 people who came and asked questions.

Additionally, some emails they got from their listeners have been so touching. It’s amazing how a show gets to impact people’s lives in one way or another.

Most importantly, what Heavey considers as the best thing is being able to sit and record with Grant every week.