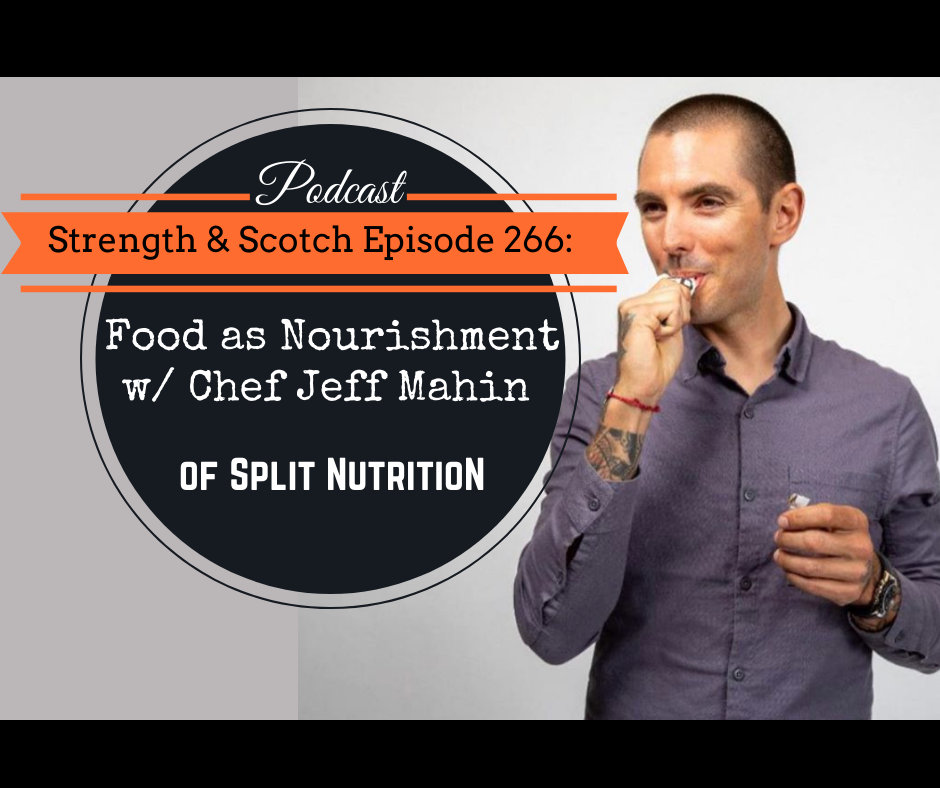 Grant and Heavey chat with Chef Jeff Mahin from Split Nutrition as he talks about his inspiring journey as a chef, being more conscientious about the food he cooks, and the perfect healthy, real snack on-the-go!

Go to strengthandscotch.com/coaching if you’re interested in learning about coaching with Coach Heavey. He and his team at Evidence Based Athlete work closely with their clients to achieve individual nutrition and training goals.

Jeff got into cooking at a young age. He had a dishwashing job when he was 13 years old and fell in love with all the chaos in the kitchen. He initially knew nothing about food and there wasn’t a lot of cooking going on in his house.

At 17, he moved to New York to work as an intern at Nobu. He remembers having nightmares of missed tickets. He got kicked out at high school and got his GED when he was 16. Prior to Nobu, he worked at Denny’s.

Although he loved the chaos inside the kitchen, it took him a long time to fall in love with food. It wasn’t until he had his own restaurant was when he was finally able to cook what he wanted to make.

[08:45] From College Dropout to Working in England

Working at Nobu, he felt insecure that all his friends went to college and he didn’t. So, he attended junior college for a year and worked at restaurants on the side. He eventually got into UC Berkeley but was doing a lot of drugs and didn’t take it seriously. For the first time in his life, he realized he wanted to be a chef.

He applied at a highly rated restaurant, in fact, the best restaurant in the world at that time with 3 Michelin stars. Chris Young, who wrote Modernist Cuisine with Nathan Myhrvold, a huge mentor in his life, called to meet him in San Francisco. There was this amazing 36-seat restaurant in England and Jeff applied to be a lab assistant.

Jeff found himself next to amazing people that allowed him to learn. He then ended up working in Chicago for a restaurant called Lettuce Entertain You owned by a guy he met, Rich Melman, who became a father figure to him.

[16:00] Experiencing Burnout to Running a Pizzeria

Following his stint at Lettuce Entertain You, he opened his first restaurant. He started cooking as if he was playing and found himself running a restaurant that charged $500 per person. He spent more money on knives and chef’s coats than he would spend on his apartment. For him, it was really ego-driven that he just wanted to go back to where he started. Rich, then brought up the idea of selling pizza.

At that time he was 27 years old and thought it was the most amazing year of his life. They broke all the rules on how to make pizza. They cooked pizza in brick ovens and jars. Nothing Italian, it was a Californian pizzeria.

They were somewhat chasing a dream of perfection. All their line cooks didn’t have experience. They didn’t know how to cook, but they cared. Jeff describes it as the best team ever.

As they grew, they opened up 11 different restaurants in three years.

Rich helped him through this phase of his life. Jeff committed to sobering up. He quit drugs, alcohol, and smoking. He started working out.

He started working out and eating healthy and feeling better than ever. If you can nourish your mind with positivity and nourish your body with good food, the ceiling is infinite. From that moment, he began to care about how people feel when they eat his food.

They use all-Californian flour still with the germ in it and using a very low fermentation. They don’t add a bunch of yeast to it. A lot of people have reactions to artificial yeast. Many times, people feel like they’re gluten-intolerant but it’s actually because of the yeast.

The same thing with cheese and other items they put on the pizza.

A lot of times, we don’t check in on how we feel after we eat. If you work out, you would usually check on how your body can feel so sore the day after, but we usually don’t apply this to food. Eat a pizza, eat a burger, eat things that are delicious. Check in afterwards and see how you feel.

As a business owner and a chef, he felt it was his obligation to bring good food to the table. This led him to find a nutritionist.

Flavor is a learned thing. Jeff grew up with the worst diet you can possibly imagine. Nobody taught him what fats, carbohydrates, or proteins are in his house. He remembers making a maple and custard-filled donut on his way to school everyday.

When you start eating healthy, you start feeling better and the relationship with food starts changing. It’s an evolution. Once your body becomes nourished with healthy foods, you begin to crave healthy food.

But “healthy” is relative. For Jeff, it’s a state of mind as opposed to a body type. Going back to being a chef, he wants people to love his pizza. He looks in a way that if he can be proud of every ingredient that goes into something and it tastes delicious then he has done his job.

We thought fat was unhealthy. We thought eating fat meant you would get fat. We realized we’re now wrong. Fat is actually a tool. This is the idea behind a lot of diets like paleo and keto diets.

Jeff partnered with nutritionist Dr. Phil Goglia, and they thought of creating a real, healthy snack from the perspectives of a nutritionist and a chef. Split Nutrition is the first peanut butter and jelly snack pack on-the-go. They ultimately made 10,000 packs and got a team of people together. What initially started out as a hobby has now grown from 200 stores in July to almost 2,000 by the end of the year.

Split is using 100% raw almonds from California and raw cashews. They don’t use palm oils. Just 100% nut butter on one side and the jam is made from organic sugar, real fruit, and pectin. Four ingredients in an entire pack.

Jeff clarifies that some cane sugars are not vegan. He has been using sugar his entire life thinking it was vegan. They remove the molasses from sugar but one of the processes is filtering it through bone char, which is like powdered bone. 50% of sugar made in the U.S. is filtered with bone char. They don’t tell you which one is vegan and which one isn’t.

Because they wanted the jam to be vegan, all of their jams comes from berries grown in New York. They tooka chef’s perspective. They use 100% cacao, no alkali.

The Lakers eat Split like Kevin love. But also kids and moms eat it. So they’re trying to cater to everyone to become a real food on-the-go.

You can find Split Nutrition in physical stores like Whole Foods Market, Wegmans, Gelson’s, Erewhon, Albertsons, Natural Grocers Vitamin Cottage. You can also find them on Amazon. Or visit their site to subscribe and learn more about the brands.

If you happen to be in Chicago, DC, and Los Angeles, drop by any of Jeff’s restaurants including Stella Barra (Chicago, D.C. and Los Angeles), Summer House (Santa Monica, Chicago, and D.C.), and Do-Rite Donuts (Chicago).