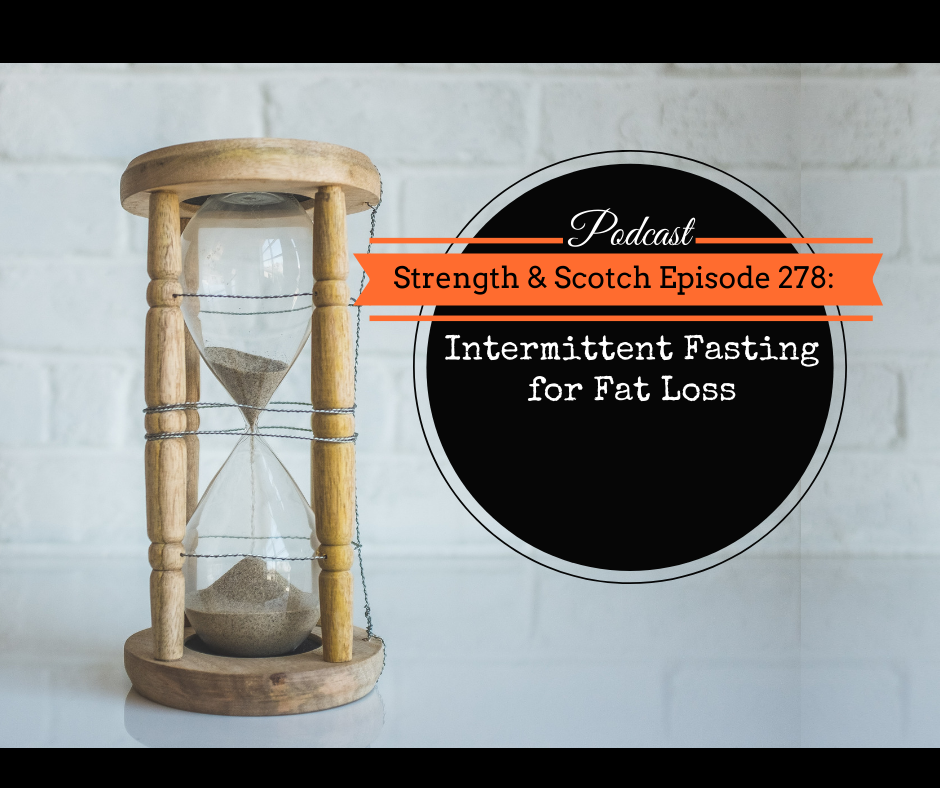 Grant and Heavey discuss intermittent fasting for fat loss. First of all, is it really that effective? How long should it be done to be beneficial and how regularly should it be done? These studies should help shed light on those questions!

Check out how Heavey can help you plan out a fitness program designed to achieve your goals. Go to www.strengthandscotch.com/coaching.

[10:30] Fasting in Different Types and Forms

They compared the effectiveness of different diets. The most common types of fasting are periodic 5:2 diet fasting where it’s five days of normal maintenance calorie level and then two days of severe restriction.

Alternate day fasting is every other day of full fast versus full food. Time-restricted feeding is the idea of having an eating window where, for instance, you eat from noon to 8 pm and then fast the rest of the time.

And then there’s religious fasting, which they basically brought up because of it being the largest source of data for measuring the effectiveness of fasting among those who participate in Ramadan.

The average reported weight loss in the cohorts ranged between 4% and 10% over periods of 4 to 24 weeks. This gives some perspective on a wide range of people as to how much weight they could lose over that period.

The results for Ramadan on body weight have been inconclusive. Some studies showed weight loss but others reported no significant change. For the most part, those that reported weight loss often regained within a few weeks after the fasting period.

If you decide to do fasting for a while and then stop, why do you think that the benefit that you got while you were fasting would persist? That being said, you will lose weight but then go straight back to old habits that had put on the weight originally and then, of course, you gain your weight back.

It can be a tool to lose weight but you have to understand there would have to be some changes to sustain the results. Once you lose that weight, instead of returning to 2500 calories, think of going to 2300 calories a day. Or include more activity in your life to help balance that out and maintain that lower body weight.

Grant’s point is that fasting doesn’t mean the same thing to everybody. So when we talk about fasting, what exactly do we mean by that?

It’s a tool for manipulating intake. There’s not necessarily anything special about one approach over another.

Some people are better equipped to do a full-day fast. Whereas other people probably can’t, but maybe they’re alright with time-restricted feeding where they do an 8-hour eating window. Therefore, if you’re considering fasting, approach it in a way that fits your lifestyle the best.

Now there are those who avoid breakfast because it’s not convenient for their lifestyle. But your body will still reach an equilibrium because you can’t just keep losing weight forever.

The last point of the first study mentioned that fasting doesn’t appear to produce superior weight loss in comparison with continuous calorie restriction options. When it comes to other clinical outcomes like cardiovascular disease, diabetes, and cancer, there is very limited data to make any definitive claim.

That being said, fasting is a fine tool for weight loss, but don’t get it confused as being superior. The reason it helps with weight loss is not because of some metabolic conditioning but because you’re eating less calories.

[21:55] Effect of Intermittent Fastin on Women Who Lift

The next study is called Time-restricted feeding plus resistance training in active females: a randomized trial.

Interestingly, the study wasn’t focused on fat loss or an obese population, but on females who lift weights. They looked at the effect of intermittent fasting on 40 women ages 18-30 while lifting over an eight-week period.

The IF group stuck to an 8-hour window eating from noon to 8 pm. They’ve set different variables such as body composition, muscular performance, etc. But the thing they kept fixed was a maintained protein intake across the fasting group and the nonfasting group to make sure it was an apple to apple comparison.

They found that intermittent fasting didn’t seem to impair muscle gain or strength gains in the women. But the changes in fat mass were slightly greater in the IF group, but the difference wasn’t statistically significant.

The intention was to keep the energy intake the same between the IF and the controlled groups. But they relied on food recall to monitor that which was notoriously bad. It’s likely that the IF group was eating less which was what contributed to the additional fat loss.

The key takeaway here is that though these women were experienced lifters, they were still on the lower side of experience. If you’re a really serious lifter and looking to maximize gains, Heavey wouldn’t recommend intermittent fasting.

But if you’re looking for fat loss at the same time, then it seems you can achieve both strength gains and muscle gains with an intermittent fasting diet. So this is a plus for everyday people.

[25:46] Intermittent vs. Continuous Calorie Restriction: Which is Better?

The third study is called Effects of intermittent and continuous calorie restriction on body weight and metabolism over 50 weeks: a randomized controlled trial.

They looked at whether intermittent calorie restriction had a stronger effect on adipose tissue gene expression, body comp, and a handful of metabolic biomarkers when compared to continuous restriction.

They talked about epigenetics and how lifestyle can drive gene expression. They identified a handful of genes associated with obesity and so forth. They looked to see how those may have changed between the two groups.

They looked at 150 overweight and obese participants, aged 35-65. The 5:2 group did 5 days without restriction, just at their maintenance level, and then 2 days at a 75% deficit, which worked out to roughly a 20% deficit per week.

The continuous restriction group was a 20% daily deficit and then did a controlled group with no diet at all.

The study was broken into a 12-week intervention phase and during this time, they provided comprehensive dietary counseling and bi-weekly follow ups. After that, they did another 12-week maintenance phase but with no counseling or advice. Then another follow-up was done 26 weeks later with no counseling.

They found that the intermittent group lost weight a little bit faster initially. But across the entire 50-week period, the weight loss among the two intervention (5.2%) and continuous restriction (4.9%) groups was nearly identical. The control group ended up losing 1.7% of their body weight.

Hence, intermittent could be a solid approach to jumpstart your progress. Then once you gain some traction, because it might be more difficult to maintain, it’s much better to move to something more sustainable.

There are shades of grey to all of this. The reason that there is no one definitive answer. That being said, intermittent fasting is a tool. You can use that to increase your weight loss if it works for you. But it doesn’t seem to really affect a lot of the metabolic markers. You get benefits from intermittent fasting but it has gotten blown out of proportion. That said, don’t ignore it either.

In longer-term fasting, you basically fast for like a week. The goal isn’t necessarily to lose weight from this. They might be doing it for reasons like autophagy, the body’s way of cleaning out damaged cells in order to generate newer, healthier cells. Some people would do one week of water fast. But this is a lot more intense and should be done under the supervision of a medical professional.

Traveling itself can sometimes be successful. But it’s different from a vacation. It’s going somewhere with an element of relaxation. Now, would camping count as a vacation?

For Heavey camping is a way to unplug. Vacation means disconnecting from everything and just fully submitting to being present. There’s no greater opportunity for that than camping. It’s all about being present.

But for someone who’s freaked out by bugs and bears and nature, then camping for that person would be more stressful travel.

Effects of intermittent and continuous calorie restriction on body weight and metabolism over 50 weeks: a randomized controlled trial