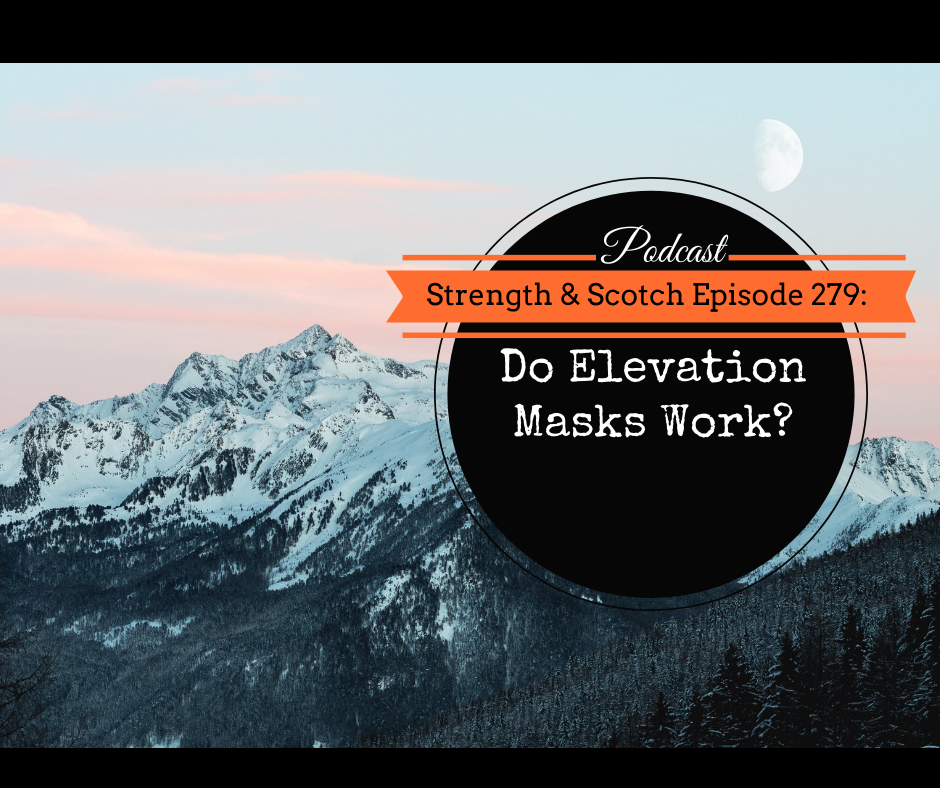 Grant and Heavey discuss the benefits of using an elevation mask in your training.

If you need some help with your training, find out how Heavey can help you. Go to strengthandscotch.com/coaching and see if you and Heavey are a good fit.

[10:50] Is There a Benefit to Wearing Elevation Masks?

People train with elevation masks with the idea that they’re limiting the amount of breathable oxygen to mimic an environment of higher altitudes.

There are many purported benefits of training at elevation including improved VO2 max, increased oxygen delivery to the muscles, etc.

However, there isn’t any strong data to support whether training at an altitude is beneficial for endurance.

Masks do not simulate elevation training very well. People are mostly attracted to them because it makes their workouts feel harder. Secondly, it feels like a fitness hack that might just work so people are drawn to it because everybody loves hacks.

But having a harder workout doesn’t necessarily mean it improves your fitness. Just because something is harder doesn’t make it more effective.

In the data, the work intensity of people who trained with elevation masks or even trained at altitude dropped because they weren’t able to push as hard with the reduced oxygen intake.

Masks do train the muscles of respiration. Though it doesn’t mimic the environment per se of being at higher altitude, it does act like strength training for your lungs for your breathing muscles.

In most healthy people, this is not a limiting factor for their aerobic performance. This type of airflow exercise is great for those suffering from conditions like chronic obstructive pulmonary disease (COPD).

Some high-level athletes actually spend big bucks on high altitude simulation tents. They turn this altitude training on its head so you lift high and train low. It’s beneficial if you’re training at low altitude because you can maximize your intensity and effectiveness.

But if you live at a higher altitude, the oxygen-carrying capacity of your body is increased so it improves the delivery to your muscles. So they try to mimic an environment where you can live high and train low where they just live in their tents.

In the end, elevation masks do a poor job simulating an environment that probably doesn’t improve performance while inhibiting your exercise intensity.

[23:23] Whiskey Time: Flavors and Grains That Contribute to Whiskey

What is a mash bill?

Some whiskeys we refer to here have legally mandated requirements for what goes into them. Bourbon, for example, is a type of spirit that has a lot of laws around it. You have to have at least 51% corn. The mash bill consists of different percentages of corn, barley, wheat, etc. The mixtures make up the mash bill for that particular whiskey.

The reason different types of rye have different flavors is because they could have extremely different mash bills. So a bourbon that has 100% corn mash bill is going to taste way different than one that has 51% mash bill of corn.

[28:10] Grains that Contribute to the Flavor

There are a number of flavors that contribute to the final product. Bourbon typically ends up being sweeter. The corn whiskey has a bit of a sweet element to it on the tongue and a little spicier.

It’s also good to note that the taste of all whiskey has to do with the aging process. Most scotch is double-distilled that leaves a lot of the flavor left in that spirit from the malt barley. When you see malt in the whiskey, the mash bill would be 100% malted barley. Most of that flavor has to do with how long it’s aged and the cask type it’s in.

One of the reasons bourbon is so sweet is not just because of corn, but also because a whiskey law that states it has to have a brand new, charred oak cask. The charring of the oak creates a vanilla flavor that gets soaked in as it ages. So if it’s aged in a sherry cask, it’s going to have that sweet sherry flavor. And all of that stuff adds up.

In general, bourbons are going to be on the sweeter side. If you see it has rye, it’s going to be a bit spicier. If you see something that’s scotch, it depends on what region in Scotland it comes from.

[30:33] Other Reasons for the Different Flavors

While the mash bill does affect the flavor, it is a smaller contributor in the overall profile when you stack it up against factors like aging and the barrel type.

A lot of people like Irish whiskeys because they’re smooth. That’s the direct result of them being triple-distilled whereas scotches are double-distilled which some people describe as more flavorful.

Some distilleries try to keep more flavor in the spirit while other ones try to make a cleaner-tasting spirit.

All of these things contribute to the flavor. That’s why you can have bourbon that’s over 50% corn and taste so different. It’s the same reason that every scotch while 100% malted barley mash bill could taste so different because the grain is only contributing a small amount to the overall flavor.

Wheat is the filler of the grains for whiskeys because wheat whiskeys are naturally flavored. It can be added inexpensively to increase alcohol content or dilute the overall flavor. It allows distilleries to experiment and balance the flavor before it gets aged.

Send in your scotch questions through email at [email protected].

Interested in coaching by Heavey and his team at Evidence Based Athlete? Learn more at: strengthandscotch.com/coaching