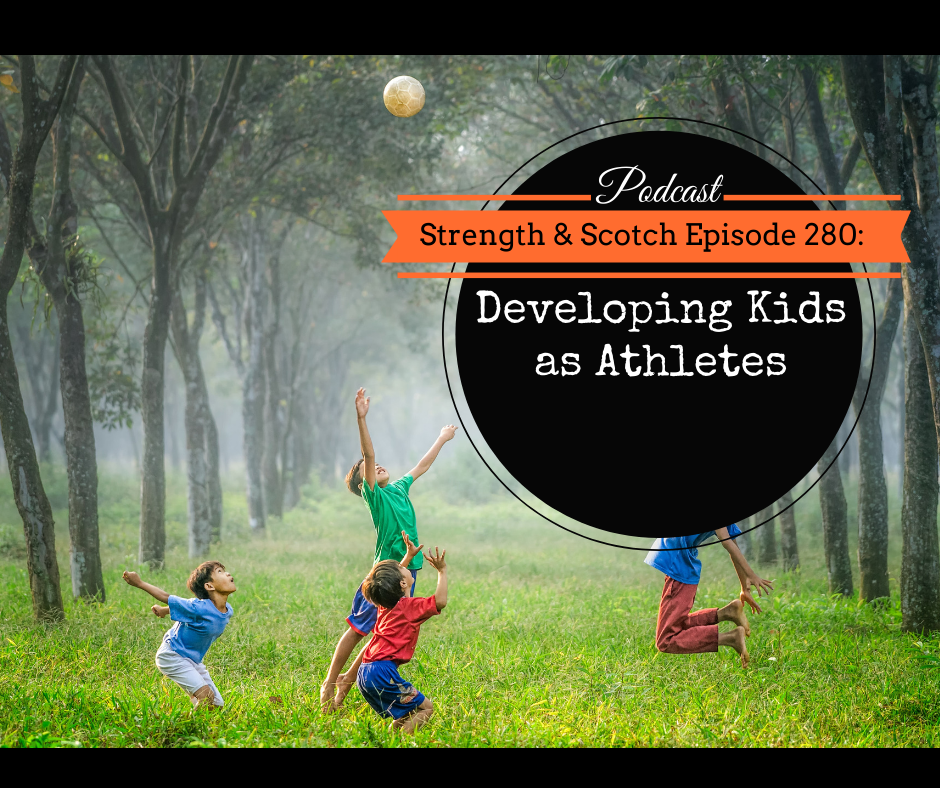 Grant and Heavey answer a question from Dean asking about how far kids, 8-9 years old, should be pushed in training? They’re presenting the National Strength and Conditioning Association (NSCA) recommendations along with their thoughts.

Heavey thinks we’ve gotten a bit carried away with sports specialization at a young age. It leads to issues like more overuse injuries earlier on, and actually worsens overall athlete development as they grow up.

90% of the first three rounds of the NFL drafted players were multi sport athletes in high school. But now there’s a trend, particularly with baseball, where parents want to keep kids in baseball all year round and just hone in on it from a really young age.

There’s a real difference in how you might train for a specific sport versus overall athletic ability . Baseball is quite a skilled sport. This may lead parents to hyperfocus on skill development instead of physical development. They want to see pitches over and over throughout the year.

Parents want to provide their kids an opportunity to excel or possibly even to get a scholarship. Maybe they think that their kid is going to make it to the majors. But the propensity for people to put their kids in year-round baseball is a little unhealthy at the youngest of ages.

Historically, kids would play a variety of sports to get exposed to them. For instance, they’d play basketball in the fall or spring and then baseball or soccer in the summer. This is a valuable approach that can help build well-balanced athletic children.

In fact, the National Strength and Conditioning Association (NSCA) has published what’s called the long term athletic development model. It breaks down the stages by ages, with some recommendations.

Males and females 0-6 years of age: Keep active for 60 minutes a day, including physical activity with other youth. Teach proper movement skills – run, jump and explore. So this is definitely the age where kids are just out having a good time.

For example, kids when they’re six are out running around with their friends playing Capture the Flag or whatever. The important part these days is they’re not just in front of a screen entirely. Keep them active as part of their daily routine. You’ll see throughout these early stages it’s mostly about fun. It’s not about trying to push kids into a specific sport or activity that they grow to hate. That’s not helpful.

That being said, it’s hard for parents to keep kids active and entertained without resorting to screens. Most adults rely on screen technology to keep working to communicate with people, but for kids, it’s going to be hard since they’ll be exposed at such an early age.

This is an excellent age to get kids involved in both swimming and gymnastics, and maybe like a little bit of soccer as they get to that older end of that age range. It’s really just about having fun, and to not lose sight of that. Those activities are important because they build body awareness, strength, and bone density.

[17:26] Benefits of Learning These Sports at a Young Age

For soccer specifically, the concept of a team where multiple people have one goal together. While the swimming piece is more of having an important life skill. When you learn as a child, there’s breathing control that comes from swimming, which is a powerful after-effect of learning how to swim at a young age. With gymnastics, the bone density pieces come in the proprioception, the body awareness, the tumbling, and all that stuff are super valuable.

It’s a great time to sort of cast a wide net and let kids try a bunch of things out. Maybe this is when they get into baseball or basketball. But again, it should really be focused less on what you want for the kid and more about finding ways that the kid can be active, but also have fun. Associating fun with it is a really, really important thing at this age.

People talk about developing athleticism at this age. They’re trying to get you to instill athleticism at this point. It’s not necessarily the strength of the fitness, or the sport-specific skills, but the generalization of athleticism. That’s the problem with pushing kids down a path of specificity at this age is because it does limit their potential and later years.

It’s really about giving them the time and reps, and the opportunity for their bodies to figure out things that need to happen. Not so much the result, but the process because the result-based learning will happen later.

It’s mostly just about casting a wide net and being active and doing different things. This develops athleticism and it benefits the kids in this grouping. It’s not that lifting weights will negatively affect them, per se. But there’s this myth out there that lifting can stunt kids growth. And that truly is a myth.

This can be too much to ask. Perhaps, expose your kid to many different avenues of sport. It doesn’t have to be all structured sports. To be able to find something that really resonates with the kid is pretty powerful. Exposing kids to multiple avenues of sport is extremely valuable for developing their long term potential.

Heavey thinks this is the age where we can start to think about fitness progression and adding some structure to all of it. It’s just about like instilling discipline getting them to move. Maybe you could start to get into things like goblet squats and lunges and so forth. But really think about just bodyweight movements.

Grant adds that a good way to approach kids at this age with adding a level of training for their sport is to emphasize how bodyweight training can make them better at the sport. Because when you’re a 10-11-year-old kid and you’re just starting to play ball or pitch whatever, it’s important to explain to them that if they do these push ups or sprints, they’re going to play better in their games.

This could probably resonate with them more instead of them feeling like it’s a task or a chore that’s not fun. Get them to understand that the time they put in doing body work, working on their physical aspect is going to help their game. Getting that mindset instilled at a younger age is a good point as long as we may be careful about putting too much pressure on the kids about it.

NSCA recommends modern structure with the main focus on technical skills and the secondary focus on performance outcomes. Aerobic training becomes a little more important but the focus is still on skill, speed, and strength. Periodization can be incorporated slowly with multiple phases and focus may shift to only two sports. Competition time will increase compared to practice time and practice time will start to incorporate more real-life in game-like scenarios and situations.

This is the age to become more regimented with strength and especially the conditioning pieces. We’re sort of on the precipice of really being able to benefit from structured strength work.

Elite athletes keep playing a couple sports and Grant thinks that’s where this guide is coming from. Think of Tony Gonzalez. He played pro football, but was also a gifted basketball player. Another great example is Antonio Gates, who didn’t play football in college and then eventually decided to play later, He was mainly a basketball player up until that point. For those who don’t know, he ended up being a Hall of Famer in the NFL.

Most people know about Michael Jordan who played basketball for so many years and dominated and then left to play baseball. He fully dedicated himself and started coming up because he had to go to the minors. He started practicing intensely and became really good and I think they were about to elevate him but then that’s when the MLB strike came about and that’s when he ended up going back to basketball.

NSCA says: Participate in highly structured activities with a focus shifting to performance. Start specializing in one sport. Begin training year-round at a high level of intensity with proper progression and adequate rest. Develop strengths and decrease weaknesses. Develop high level competition by modeling high level practices. Could be competing at the national and/or international level.

At this age range, Heavey didn’t do any sports while Grant did rock climbing. Heavey thinks it’s a great activity for young kids. It helps build that awareness. It helps build strength It’s a great bodyweight type of activity. Obviously, not in a dangerous environment, but in a controlled environment like a gym. It’s an excellent sport-type activity to have kids involved.

Bouldering is basically more physically strenuous. They’re athletic movements condensed into a very short amount of time and you don’t use much in the way of gear. You’ve just got your shoes and a pad to fall on. With bouldering, you’re typically staying under 20 feet, sometimes maybe even 10 feet. They’re short, technical climbs. Often it’s inverted and involve dynamic movements where you only have one or sometimes no appendages touching the rock, and you’re swinging, throwing, and trying again.

The idea of bouldering is to find the hardest things and get to the top of it. Whereas mountaineering is the opposite. It’s a completely different game. It’s very low oxygen. It’s getting to the top no matter what, howeer long it takes going slow, being deliberate.

With bouldering, when you’re pushing yourself at your limit, it might take more than a whole day, maybe even weeks working on one what they would call problems, and it’s a few movements that you do over and over, over and over. You program your body to get the timing just right and the weight balance just right. Eventually, you get it and you can imagine how ecstatic that feels.

Mountaineering is the exact opposite. You don’t get more than one shot, because if you fail, you’re dead. There’s all sorts of different rock climbing and bouldering competitions these days.

NSCA says: Competing at the highest level of competition professional and/or international level, requires a very skilled athlete and very high level of dedication. These athletes work with highly qualified coaches. Training is highly specialized with periodization, making sure the athlete is getting proper training, recovery, tapering, and peaking at a perfect time. Must work with an NSCA coach.

Rolling back to Dean’s question about kids that are 8-9 years old. They don’t need to be lifting with a barbell. They should be engaged in as many sports as they possibly can. They probably shouldn’t be playing baseball year round. And if they really want to, if they’re showing interest in taking their performance to the next level, then maybe they should channel that into some structured bodyweight type of exercises and some structured conditioning work.

But all should be under the supervision of a trained professional because at this age, kids can injure themselves and we don’t want to see that while they’re developing and growing.

These kids are young and through moving can develop fundamental movement patterns. You have to understand that they don’t have the hormonal patterns yet to like really pack on  ton of muscle.

So let’s concentrate on getting the kids to move well, and to function well in space and to be well rounded. That’s really going to be the thing that will propel them to success within a sport a little bit later in life.