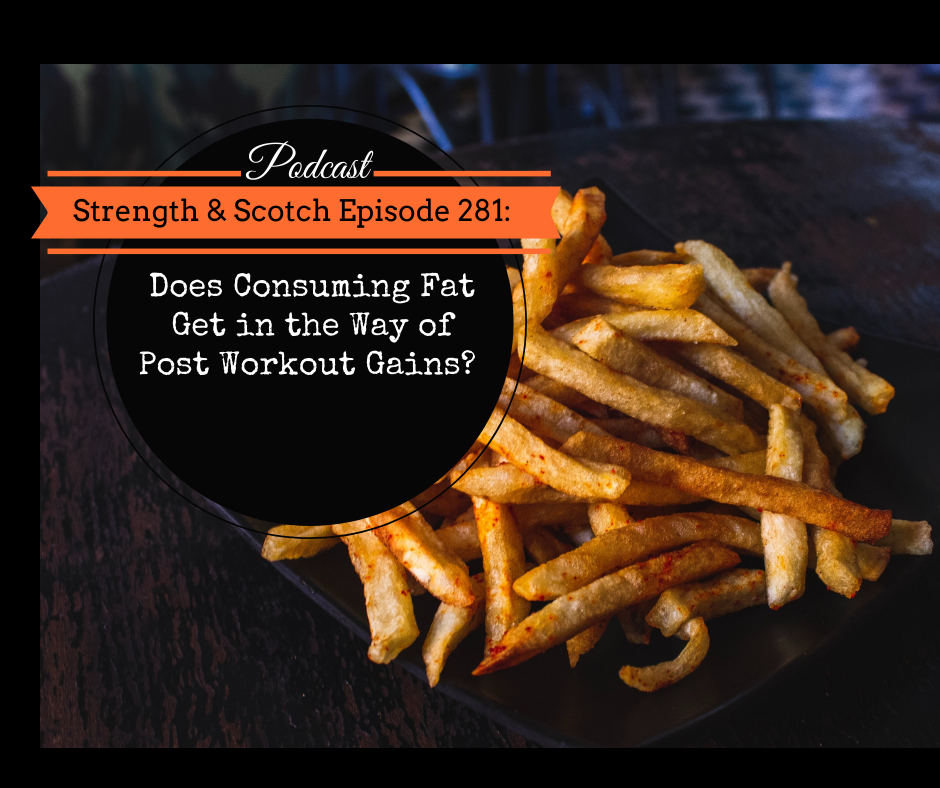 Grant and Heavey take a listener question about whether you should avoid fat post-workout. While we’re on this topic, find out the effects of protein, fats, and carbs right after working out. Should you worry about consumption post-workout all together? What would be the best combination? Or do you even need to consume any of them right after workout at all?

Looking for a structured approach to achieving your fitness goals? Check out strengthandscotch.com/coaching to fill out a short contact form to get in touch with Coach Heavey.

You probably see many people with their blender bottles shaking around the gym. Even though it’s a concept popular amongst bro culture, it turns out to be untrue under most conditions.

The only times where it can be beneficial to consume protein directly after your workout in our environments is when you are under consuming protein on a regular basis. Or if you’re fasting or coming off of a fast, so your body, you don’t have high levels of circulating protein. Therefore, you may benefit from quickly getting protein into your circulation.

Otherwise, if you’re regularly consuming enough protein throughout the day, then then this whole post-workout protein thing isn’t really an issue and doesn’t really benefit you.

It’s important to keep in mind that the timing of nutrients is relatively of little importance when discussing nutritional topics. Yet, it can be still a difference-maker at the highest levels of competition. But for ordinary guys, it’s not gonna matter all that much.

When we consume nutrients, people like to think of them in an isolated manner, but what happens is you typically consume items that contain a combination of macronutrients. When you do that, that in and of itself affects the way that your body digests them. Fat tends to slow down digestion.

So let’s say that you consume a post-workout whey protein shake. All it is is whey protein. Whey is a fast-absorbing protein that goes into circulation very quickly. However, if you were to then consume that, and instead of using water to mix it you used, cocoa, full-fat milk or coconut milk, or some sort of milk, then that’s going to dramatically slow down the digestion. If we take it a step back and say it’s some sort of fat like avocado, where you’re chewing some sort of whole food fat, then that’s going to slow digestion down even more.

If muscle milk is similar to whole milk, it is extremely anabolic. These liquid foods tend to digest more quickly than whole foods that you have to chew and that process takes longer when you digest them.

But if you’re consuming protein and have an adequate amount of protein throughout the day, then the speed at which the protein you consume post-workout (if it’s altered by the fat content that you consume along with it) is not really going to matter.

But again, if you’re under consuming protein or you are working out traditionally after a fast, then it might make sense for you to consume your protein without fat present.

Carbs are used for fuel for immediate energy needs and also to top off glycogen levels that are also anti-catabolic. They help stave off muscle breakdown and your muscles are primed for glycogen uptake six hours post-workout.

For most people, again, it’s not going to make any bit of difference to have some fat along with their carbohydrates. Post-workout carbs can absolutely be beneficial. Carbs post-workout with protein is okay too.

The protein you’re getting is really not about the timing so much. You don’t need to hurry to drink it and you can wait till you get home from the gym. The real difference-maker is having enough carbs post-workout although it doesn’t have to be immediate.

[22:37] Scotch Recommendation for a Bourbon Drinker

Many people say that they always drink bourbon but they don’t like scotch that much. Interestingly, most scotch is aged in ex-bourbon casks for quite a long time and absorbs a lot of that bourbon flavor.

The difference is that the spirit itself in bourbon comes from predominantly corn mash bill. It’s very sweet on its own. It’s added to charred oak casks that bring a lot of vanilla and flavors. The spirit that develops on to the scotch is a little more neutral and starts to absorb those flavors.

If you prefer a sweeter spirit, try a scotch that is aged in more port and Sherry casks. Because even though most of the scotch is already a bourbon, when you compare it to an actual bourbon, it’s not as sweet. That’s because a lot of it’s been taken out. A lot of the flavors of that cask have been soaked out by the bourbon by the time the scotch gets in there.

Another option is a Bowmore 12, an Islay whiskey that’s got some peat in it. It’s aged in a sherry cask. So if you want some peat look for some things that are from the islands or from Islay that are sherry cask, Bowmore is a great example. It isn’t super crazy peated and it’s aged. Bowmore has got a blend of ex-bourbon and ex-Sherry casks. There is a particular bottle called the Aberlour A’Bunadh, which is not peated but is a heavily sherried scotch and is really sweet. A lot of bourbon drinkers might take to that.

Also look to places like Highland Park distillery with a little bit of peatiness and a ittle smoke. You can find things that are on the more full-bodied side. The body of the Highlands or Speyside tends to be lighter bodied compared to a lot of Bourbons.

When you’re not a fan of scotch or you’re just getting into it and want to try a little bit of peat, the worst thing you can do is have a Laphroaig. Instead, look to Highland Park and Talisker.