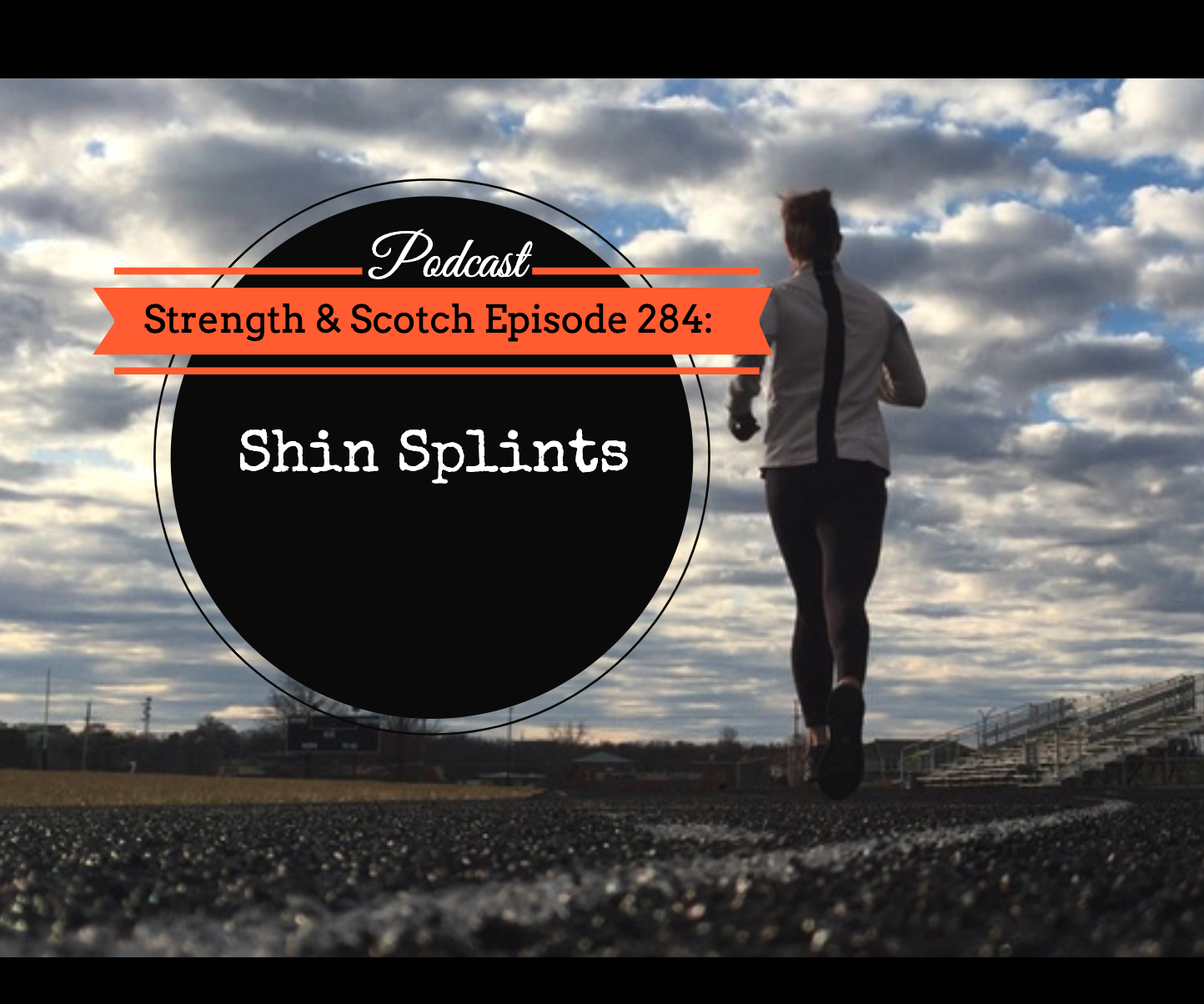 Grant and Heavey tackle a question from listener Danny on how to avoid shin splints.   Joining in for today’s episode is Heavey’s wife and head coach at Evidence Based Athlete, Nicole.

Feel like you’re plagued by injuries?   Head to strengthandscotch.com/coaching to see if one-on-one individual coaching can help you navigate those obstacles with a structured training program built specifically for you.

There’s not really a consensus of what causes shin splints. Biologically, there’s a lot of factors in terms of increasing mileage or the terrain that you’re running, on the shoes that you’re running, and your biomechanics. Those can all play a role. But the exact thing that’s going on in your lower leg has not been completely agreed upon.

Shin splint is not a specific diagnosis, but kind of this category of things that can occur to you when you’re hurt.

Some people believe it’s related to the muscle kind of pulling away from the bone.  Others feel that it’s more of this tissue that surrounds the bone called the periosteum. Inflammation of tissue, or inflammation within the muscle or maybe it’s a combination of all of these things.

There’s this notion that shin splints are this temporary, fleeting thing, that if you just take a quick break, then they’re certain to go away. It could last maybe a week or so.

But there is a version of it where shin splints lead to something called compartment syndrome. It’s characterized by a runaway swelling in the shin and it leads to people’s shins possibly, if gone untreated in extreme circumstances, to split open. The shin basically explodes brought about by the pressure from inflammation. The muscle swells and the skin just splits open.

If you get shin splints and you still keep pushing then eventually this could lead to compartment syndrome which can be treated through surgery.

So it’s a serious thing! If you have persistent shin problems, don’t just grin and bear it because that could lead to a very serious medical condition. But as Nicole mentioned, shin splints are in a category of things. And that’s one manifestation of this category. It’s a rare one.

A lot of times shin splints happen because people tend to go from zero to 60 quickly.  The body is not incrementally adjusted to increased mileage.

Compression sleeves can definitely help you feel a little bit better. I don’t think it will treat the underlying issue, but wearing a sleeve or wrapping your shin and an ace bandage are ways to ameliorate the pain when you’re running. Again, it’s a band-aid. So do your best to rest and give it time to recover when you can.

That being said, compression gear does have a place in recovery so there may be some benefit to recovering from a shin splint. But there’s no direct science connecting the use of compression with the reduction in shin splint propensity or magnitude.

[17:13] Stop Running for a While; But What If You Have a Competition Coming?

If you have shin splints, the solution is to back off and do a couple of other things. While you’re backing off to help reduce the pain because it’s an inflammatory condition, you could use some anti-inflammatories temporarily.

Stop running for a little bit. Maybe a little bit of ice could also be a short term solution. Reduce your mileage, and maybe stop running entirely until the pain disappears because you don’t want your shins exploding, and then build back up slowly from there.

If you have a competition coming up and need to keep training, you may want to split that training with some other modality.  Substituting some of your running with biking, rowing or some other modality where you can challenge the aerobic system similarly for whatever competition that you’re doing but that is less impactful on your shins.

Calf exercises are actually a good idea. Also, it’s fairly common for you to only have shin splints in one leg. If that’s the case and it’s your dominant leg, it’s possible that that leg is taking over because the other leg is weaker, and you’re overcompensating on that side.

Think about that in terms of in the gym and weight training, meaning, doing unilateral single-leg exercises to balance out your hips or ankles, knees.  All of that accessory work can prevent problems in the future.

If someone is an overpronator, meaning that when they step down on the ground, their arch collapses which causes their ankle and their knee to cave in a bit, this is going to put a little bit more pressure on the shin. That person may need orthotics or maybe a shoe with a little bit more stability.

If an overpronator looked at the bottom of their shoe, it would look like there’s more wear on the inside of the ball of the foot closer to the arch.

If you have a pair of running shoes that you’ve put a significant amount of miles on, look at the bottom. It can provide some clues as to how you may be running with poor technique.

Seeing a local specialty running shop is a great idea to get some assistance on your foot strike and wear patterns.

If you’re suffering from consistent pain from running, you have to resolve your technique issues and in the interim, you may need some support through motion control shoes or something like that until you can resolve these technique issues and possibly move to something that’s a little more minimal from there.

Pay attention to that because whatever is happening in your feet is going to travel up the shin, ankles, knees, hips, into your back and everywhere else. But this is one of those topics where you have to be really careful because if you go see the wrong chiro, they’re gonna have you pay like $1,000 to do some random stuff.

[24:59] Buying the Right Kind of Shoes and Designing Your Training Around That

For Heavey’s clients, they have them go through a whole battery of testing where they’re doing single-leg movements and assessing strength from side to side. They have them do different mobility type things where they can essentially create a full assessment of their movement and combine all of that information to determine if there are limitations.  A training program is built based upon the testing and assessment results.

[26:32] Pose Running Can Reduce the Impact on Your Joints

There’s a method of running called pose running that’s supposed to reduce the impact on your joints. The premise basically is you’re running more on your midfoot with a quicker stride.

However, Nicole believes that your body’s going to figure out the best way that it can move. And we’re all so completely different based on our joint mobility, the length of our bones, and all of this stuff that even pose running isn’t the perfect thing for everyone.

Sort of the idea that there’s no perfect one way to squat, right? People have different geometries in their body, and there may be varying techniques that are best for you.

[27:37] Other Factors that Affect the  Impact of Your Running

There’s a whole host of other factors to consider. And maybe dial back the impact that you’re putting onto your body, your shins, and your knees from the running. This could help you maintain the mileage you’re trying to achieve without paying.

Concrete is a lot harder than asphalt and asphalt is going to be harder than dirt. So think about those levels, be mindful, and be very careful with your mileage.

The rule of thumb for running is don’t increase your mileage more than 10% a week. And if you go beyond that, you risk too much too soon, getting shin splints or other aches and pains from just increasing your mileage too quickly.

When you’re first starting out, you can increase a little bit quicker at first. But once you get to maybe 10 to 15 miles a week, depending on your history with exercise, then try to follow that 10% rule and just take it slow building up.

So here’s a number of things you should do when dealing with shin splints:

1. Check your shoes to make sure that you’re running correctly.

2. Monitor how quickly you’re ramping things up and you want to ramp things up at a controlled pace. If you’re running on a surface that is not conducive to healthy running, try to find a different place to run. That could be either the surface you’re running on or even the angle and sort of inclination of the running.

3. While you are training, you want to recover in a way that enables your body to rest as much as possible. If you’re starting to have inflammation, you might want to have ice, compression, and some anti-inflammatories if it’s really bad. These kinds of things all work together to allow you to ramp up that training to a place where you want to be.