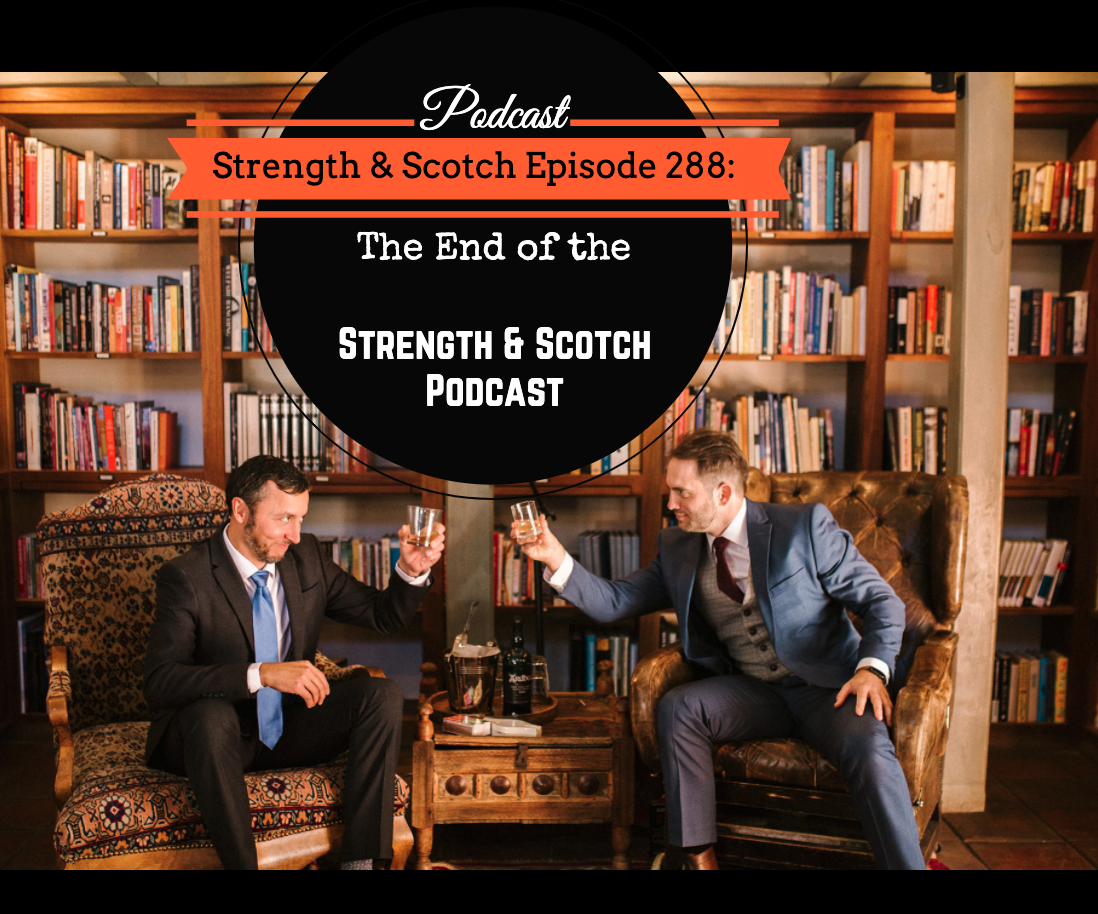 Grant and Heavey have done almost 300 episodes now for 6 years. It has been a good run and today marks the last episode. They talk about their takeaways through the years – on life, friendship, nutrition, health, exercise, and of course, scotch!

Stress: When we go to the gym and focus on our health by changing our diet or trying to eat clean or to build muscle or to increase our performance, we so often add stress into our lives. We rarely focus on the health risks of allowing stress to overcome a lot of other things.

Health Shortcuts: That being said, there’s no real cheat or real health hacks. There are a lot of sites out there claiming you can gain muscle fast or lose weight fast, but it all really comes down to finding something you enjoy and something that you can stick with because there are no shortcuts or hacks.

Heavey realized how wild tasting whiskey can evolve when you work really hard at it. When Grant and Heavey started this podcast, they were trying to figure out what Grant could bring to the table. We knew he was fun and could talk about booze. Hence, the name Strength and Scotch. Knowing just a little bit about scotch, Grant took this as an opportunity to learn. He embraced the role given to him, read a few books and did a lot of research. He didn’t even know the difference between scotch and bourbon at that time. Or that scotch was even a whiskey. But over this six-year period, Grant has definitely put in work to learn.

People tend to put ideas within small compartments or containers, and really overemphasize things. They never want to take a step back or have trouble taking a step back. Heavey wishes that the listeners have learned to see the larger picture with all the pillars of health in mind.

Remember, the four pillars: nutrition, stress, sleep, and activity. Over time, Grant has added this 5th pillar, which is human connection.

In fact, this has been highlighted after being in quarantine for a couple of months where a lot of us are feeling worn down. This additional stress and anxiety highlights our need for human connection.

Grant and Heavey actually became friends at the CrossFit gym and have since formed an amazing friendship. As an individual, you’re able to find people you can connect with and get to share those experiences with. As you learn about fitness, you naturally learn about nutrition too. There’s this snowball effect based upon synergy which is again, based on the human connection piece.

Everybody wants black and white answers, but it’s really difficult to speak in absolutes within health and fitness. You have to acknowledge there’s a lot of nuances involved when it comes to health and fitness. Understand that what works for one person might be different than what works for you. This is a really powerful thing to accept and help you move forward with. You have to understand the process of educating yourself because there’s going to be trial and error so you just have to enjoy it.

There’s a lot that’s still going on in science. Somebody who’s never smoked a cigarette a day could have lung cancer, even though they work out and run and do everything right. But what you want to do is try to set the odds so that you have as good a chance as you can while you’re here.

Having done this for six years, Heavey has honestly felt a little burdened. He’s spending a lot of time researching episodes and creating content. It takes a considerable amount of time to put all of this together. And so, he has been starting to feel the weight of all of it on his shoulders that has been building and building. He knew it was time to hit pause so he can reassess his commitments and move forward. He needs a break to figure out how he wants to proceed.

Over the last 6 years, they’ve gone through so much both individually and personally – divorce, death, travel, pandemic – and in all those years, they’ve never missed one single episode each week.

Many podcasts will either take breaks. They’ll do repeats. They’ll do seasons. And the fact that they’re not hugely popular, but they’ve done so many episodes means they’re in the top 20% of downloads of all podcasts because of just how many they’ve put out.

Plus, it’s not free. The show has cost them money. They did try doing commercials but it just didn’t fit what they wanted to do. The reason this show has not taken any breaks is because of Heavey’s commitment to the listeners. It kills him inside whenever he gets questions and they know they’re not able to address them for like 6 months because of a huge backlog. They don’t like to leave the audience hanging.

Part of what Heavey wanted to accomplish here was help keep people focused on the things that matter. It’s important to answer these questions that people are distracted with.

On the other hand, Heavey also has to take his health seriously, especially now that he feels the burden of stress, which is not just because of the show, but because of many other elements happening in his life right now. So he has to take a step back and reassess everything and build back up from there.

So this isn’t the last that you’re going to hear from them. But it is the “last” new episode that they’ll put out on the feed for a little while.

As to how long, we don’t know as of yet. Maybe a month or more, but it will likely be less than a few months. And when they come back, it’s probably going to be a different show.

Heavey wants to find a way to make the show fun again and treat it like a hobby. Those pending questions are at a halt. But when they come back, they’re still going to be based upon the Strength & Scotch foundation talking about health and fitness.

Grant and Heavey are asking for your suggestions so when they come back, they’re able to bring you a better show. And they want to ask for ideas from you guys. If you care about this show, please take a little of your time answering this survey.

They would appreciate it if you could fill out that survey so you can help them find the overlap between what makes sense for them and what you enjoy and see if there’s a little magic that they can find in a new format.